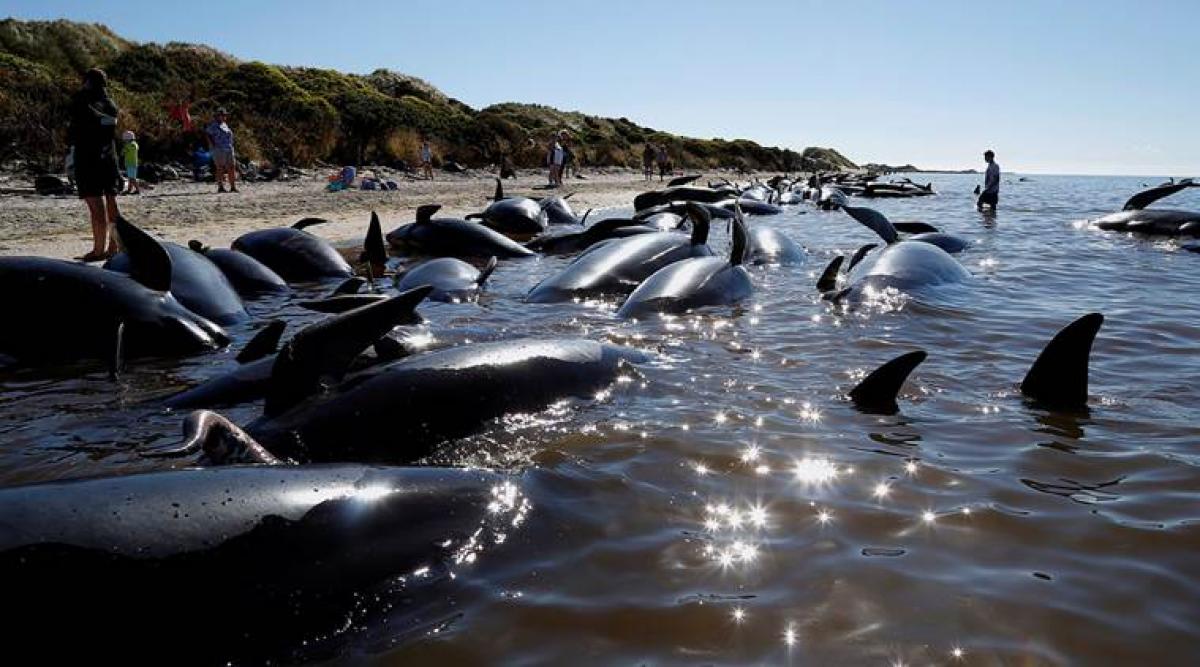 Whale rescuers in New Zealand linked arms in neck-deep water on Saturday to try and prevent about 200 pilot whales from stranding themselves again in a remote bay, where 300 of the animals died this week.

Whale rescuers in New Zealand linked arms in neck-deep water on Saturday to try and prevent about 200 pilot whales from stranding themselves again in a remote bay, where 300 of the animals died this week.

The incident, in the shallow muddy waters of Golden Bay, at the northwest tip of South Island, was New Zealand's largest known whale stranding since 1985, when 450 of the animals were stranded in Auckland, and the third largest on record.

A group of about 100 volunteers, supported by three boats, successfully turned the whales away from shore by blocking their path, conservation officials said in a statement.

By mid-afternoon, the whales had moved offshore and were being monitored by boat as the tide dropped.

"Emotionally, it's quite stressful, because you can hear the whales calling, which is really quite strong," one volunteer told broadcaster TVNZ.

Although about 100 whales stranded overnight were floated just after dawn, a fifth of that number beached themselves again in the afternoon.

"These whales are not in good condition and will be euthanized to relieve their suffering," the department of conservation said in its statement.

Since a conservation worker spotted the whales washed ashore on Thursday evening, rescuers have spent two days pouring water over the beached whales to try and keep them cool, while waiting to catch high tides to carry them out to sea again.

School children have sung to soothe the distressed animals.

The scale of the latest event "was a shock," even for a country with the most whale strandings in the world, said Darren Grover of Project Jonah, a marine environmental group.
The precise cause was not known, though beached whales are not uncommon at Golden Bay, whose murky low-lying waters Project Jonah says can confuse the marine mammals' sonar, leaving them vulnerable to stranding when the tide ebbs.

Pilot whales are not listed as endangered, but little is known about their population in New Zealand waters.