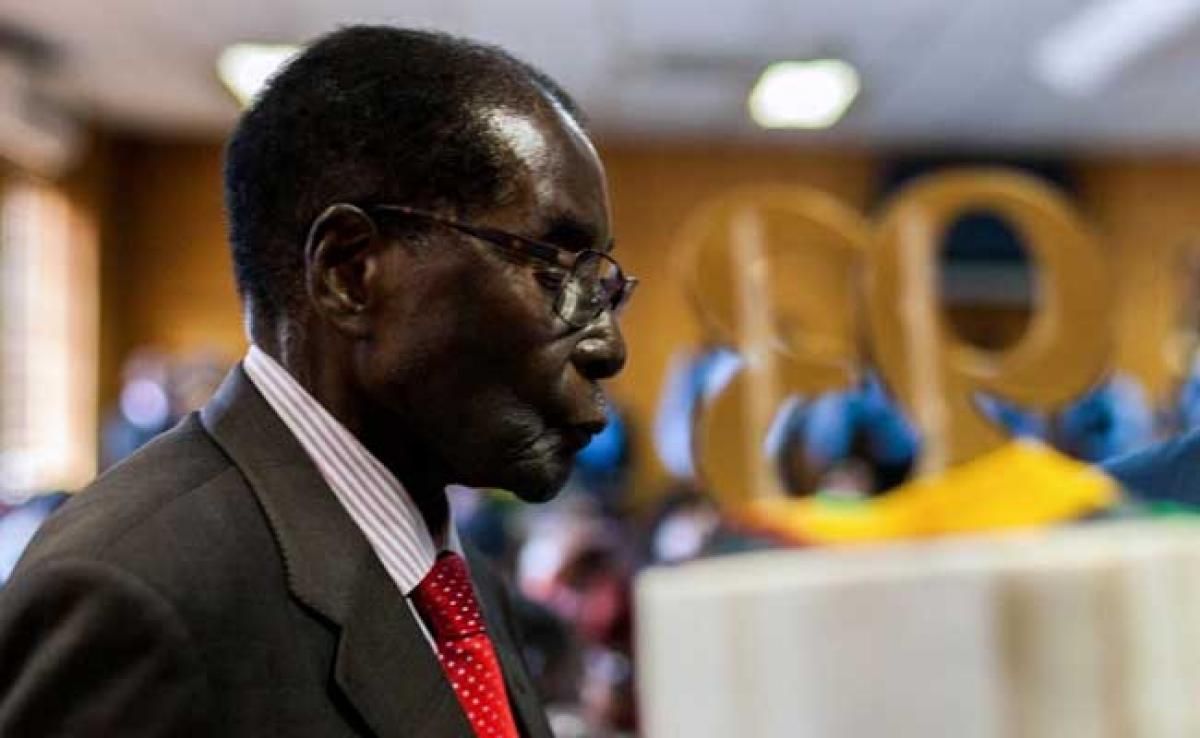 Zimbabwean President Robert Mugabe celebrated his 93rd birthday with a lavish party on Saturday, addressing his own mortality in a speech, but showing no signs of stepping down.

Zimbabwean President Robert Mugabe celebrated his 93rd birthday with a lavish party on Saturday, addressing his own mortality in a speech, but showing no signs of stepping down.

Wearing a black cowboy hat, Mugabe, who is increasingly frail, paused for lengthy periods and mumbled at times as he spoke for more than an hour.

"It's not always easy to predict that, although you are alive this year, you will be alive next year," he said.

"It does not matter how healthy you might feel. The decision that you continue to live and enjoy life is that of one personality we call the Almighty God.

The birthday party, held in a large marquee outside Zimbabwe's second city Bulawayo, was attended by thousands of officials and ZANU-PF party supporters.

Mugabe has held power since 1980 during a reign marked by repression of dissent, vote-rigging and the country's sharp economic decline.

Now the world's oldest national leader, his actual birthday on Tuesday has been honoured in a week-long extravaganza with state media filled with tributes and praise.

One of the cakes was shaped like Mugabe's official Mercedes-Benz limousine.

Holding the event at a school in Matobo has also riled locals as it is close to where many victims of Mugabe's crackdown on dissidents in the early 1980s are thought to be buried.

At least 20,000 people are believed to have been killed in the massacres by North Korean-trained Zimbabwean troops, according to rights groups.

"This should not be a place for celebration," Mbuso Fuzwayo, spokesman for the Bulawayo-based campaign group Ibhetshu Likazulu, told AFP.

"The whole area is a crime scene where the bones of victims of the massacres are buried."

The state-owned Herald newspaper on Tuesday published a 24-page supplement of gushing congratulatory messages from government departments and regime loyalists.

"It's written on earth and in heaven that our leader is R.G. Mugabe," ZANU-PF national youth leader Kudzai Chipanga told the president in his speech.

"We find it hard and impossible to talk about any other leader except yourself."

ZANU-PF has endorsed Mugabe as its candidate for general elections next year, and he remains widely respected as a liberation hero by other African leaders.

"Some in their little groups are saying 'Mugabe must go' and I ask 'where must I go?'" Mugabe said, wearing dark glasses and a colourful jacket with a picture of himself on it.

"If ZANU-PF says 'you should step down', I will step down,"

He has avoided naming a successor, but his wife, Grace, 51, is seen as a possible candidate along with vice-president Emmerson Mnangagwa.

A coalition of opposition activist groups said the event was "a mockery and a direct insult to the concerns of the citizens", alleging that poor farmers were forced to donate cattle to feed guests.

Mugabe cut the cakes with the help of Grace as the crowd sang Happy Birthday.

Born on February 21, 1924, Mugabe trained as a teacher and taught in what was then Rhodesia and Ghana before returning home to join the guerrilla war against white-minority rule.

He became prime minister on Zimbabwe's independence from Britain in 1980 and then president in 1987.

All schools around Bulawayo were closed on Thursday and Friday to prepare for the celebration, which was attended by some ambassadors and foreign dignitaries.

"Our children were told their classrooms have been turned into boarding facilities, and they (were) frogmarched to join the birthday party," local poet and opposition activist Desire Moyo told AFP.