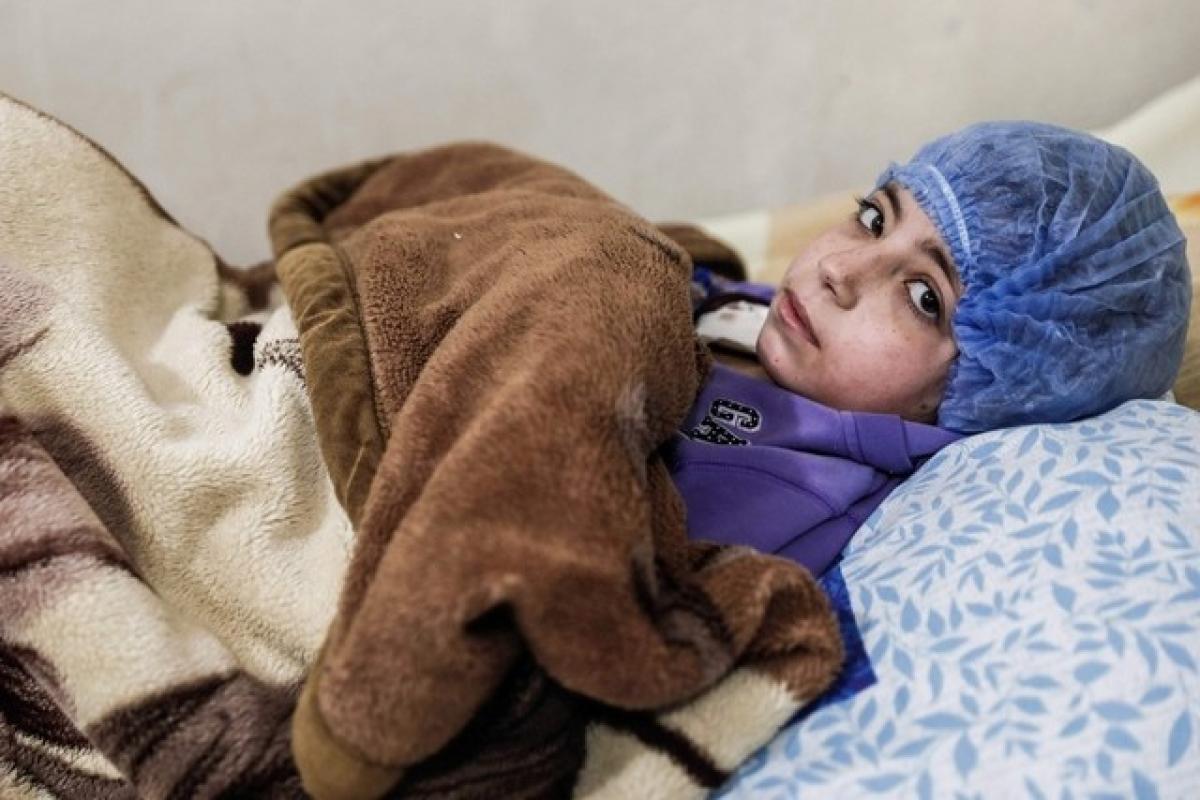 But that all stopped in October when government forces tightened their encirclement.

The wail sliced through the stuffy underground medical centre in a besieged town near the Syrian capital. Dania, 14, was writhing in pain ahead of her first ever dialysis session.

She was one of dozens of patients being treated for renal insufficiency inside a basement-turned-clinic in Douma, the largest town in the Eastern Ghouta rebel bastion near Damascus.

'It's a good thing she came in today. I've never seen results this high in my life,' kidney specialist Mohammad Sadeq told Dania's mother solemnly as she wiped tears from her teenage daughter's face.

Renal insufficiency limits the kidney's ability to filter waste out of the bloodstream or regulate hormones, and is typically treated with several dialysis sessions per week.

For residents of Douma, encircled by government forces since 2012 and without humanitarian aid deliveries since October, the condition is becoming increasingly deadly.

Last month in Douma, kidney failure killed three people. The same number lost their lives to the condition in the whole of 2016.

'Because of the lack of supplies, our patients have to have fewer sessions, said Sadeq, whose centre is the only place offering dialysis in all of Eastern Ghouta.

'Each patient used to have two to three sessions per week. Then it became one a week. And with the delay in receiving the necessary supplies, we were forced to decrease it to one session every 10 days, he said.

"We could save lives if we just had the material."

The centre was founded in 2013 with seven dialysis machines, medicine, and other equipment recovered from previously state-run clinics nearby.

When the Douma siege began in 2012, the centre began relying exclusively on equipment and medicine delivered on a fairly regular basis by the United Nations and the International Committee for the Red Cross.

But that all stopped in October when government forces tightened their encirclement.

Since then, only a single life-saving delivery of "250 dialysis sessions" from the Red Crescent -- enough to last the centre for a month -- made it through on March 9.

"If Dania had come in three days earlier (before the one-off delivery), I wouldn't have been able to do anything for her," Sadeq said.

'That delivery saved that child's life."

The benefits of the new materials, however, will be short-lived.

Khayriyah, 58, stared in disbelief at Sadeq when he told her that he could not accommodate her for another dialysis session before next week.

'This is all we can do. The supplies that came in won't last us any more than that,' he responded.

'Well, if you don't see me then, make sure to tell me to 'rest in peace',' she quipped.

'The Centre Or The Grave'

Mona, 30, has been a regular patient at the centre since it opened, and the shortages have hit her hard.

'If tomorrow there are no more supplies, I don't know what I'll do,' she told AFP, brushing away a tear without pausing.

'The dose we're currently taking is so low that I can't even stand up on my own two feet,' she said.

Because of the siege, the hormones and other medication Mona is meant to take between her sessions are nearly impossible to find or too expensive to afford.

Hundreds of thousands are living under total siege across Syria, with millions more trapped in what the United Nations dubs 'hard-to-reach' areas.

Most are encircled by Syrian government troops and allied militia, but rebels and the ISIS also use the brutal tactic.

Mohammad, 47, has been living with renal insufficiency for 12 years, but the tightening siege means he is now gripped with anxiety over whether he will have be able to access dialysis or find the pills he needs.

'The supplies are our soul - without this medicine, we can't live,' said the father of five.

As their situation becomes increasingly dire, Douma residents with kidney conditions say the centre is their only hope.

Waleed al-Shammaa, 65, said his kidney condition has worsened because of rising blood pressure - a direct consequence of the stress of survival in Syria's devastating six-year war.

'Since the Syrian uprising started, our lives have been tied to this machine. If the dialysis stops, so do our lives,' Shammaa said, pointing to the humming machine cleaning his blood.

'This centre is the only thing we've got. It's either the dialysis centre or the grave.'