Greece, Germany put tension behind them in Merkel visit 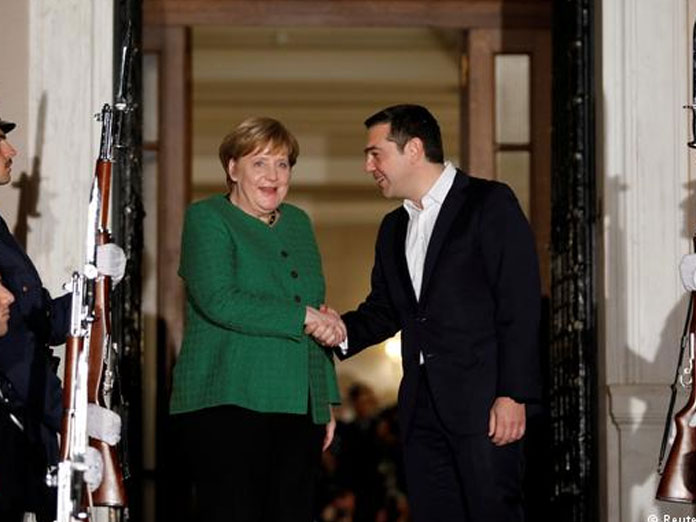 Athens: Germany and Greece put years of tension over the painful Greek bailout program behind them with Chancellor Angela praising the improvement of the country's finances during a heavily policed visit to Athens.

Many Greeks blame Merkel for the austerity they suffered for much of the past decade, which led to a sharp and prolonged recession and a bad deterioration in living standards. But very few turned out on the streets to protest the visit, more out of lack of engagement than because of a police ban on demonstrations in the city centre. Out of the two protest marches called by fringe groups against Merkel's visit, one by the Nazi-inspired far-right Golden Dawn party was cancelled. The second, by left-wing groups, had a turnout of only 400 — a few dozen of whom peeled off from the march and briefly broke a police cordon before being driven back with tear gas.

During talks with Prime Minister Alexis Tsipras Thursday, Merkel highlighted how strong initial differences with his left-led government were gradually overcome over the past four years. "Trust was developed between us, there was frankness as we kept in mind that we needed to find a solution," she told a news conference. "I know people went through great difficulty (in Greece) and had to undergo very hard and harsh reforms." But she added a word of caution on Greece's need to persist with creditor-mandated reforms agreed to right the country's finances. "Of course this isn't the end of a reform period but it's the beginning of a new situation," she said. Germany was the largest single contributor to the three international bailout packages Greece received from 2010-2018 as it struggled through a dramatic financial crisis that almost saw it crash out of the eurozone.

As part of those bailouts, successive Greek governments had to hike taxes and slash pensions and salaries. Tsipras also highlighted the detente with Berlin. "The difficulties now lie behind us, and Greece is a different country that can regard the future with greater optimism," he said. Merkel and Tsipras have met many times over the past few years, but this is the German chancellor's first visit to Athens since Tsipras became prime minister in January 2015 following a fiercely anti-bailout and anti-Merkel campaign. He once famously declared during a campaign speech before European elections: "Go back, Mrs. Merkel!" Tsipras subsequently dropped his virulent anti-bailout stance and ended up implementing the reforms demanded by Greece's creditors. Around 2,000 officers, a police helicopter and drones were deployed for the visit, which ends Friday afternoon.

Streets and subway stations were closed for security reasons. Greece emerged from its third and final bailout last August, but its economy will remain under strict supervision and the government has pledged further reforms to ensure the public finances remain on track. The two leaders also discussed migration, an issue on which the positions of Tsipras and Merkel have been relatively close, as well as the preliminary name-change deal Greece has reached with neighbouring Macedonia. Under last year's agreement, the former Yugoslav republic will be renamed North Macedonia. In return, Greece will drop its objections to the country joining NATO and eventually the European Union.

Greece argues the name "Macedonia" implies territorial claims on its own northern province of the same name, and usurps its ancient Greek heritage. The deal has met with vociferous opposition in both Greece and Macedonia, where critics accused their respective governments of making too many concessions to the other side. The issue is threatening Tsipras' coalition government, with the head of the junior coalition Independent Greeks party, Defense Minister Panos Kammenos, saying he could leave the government if it goes through. Germany has made it clear it considers the name deal a historic opportunity.