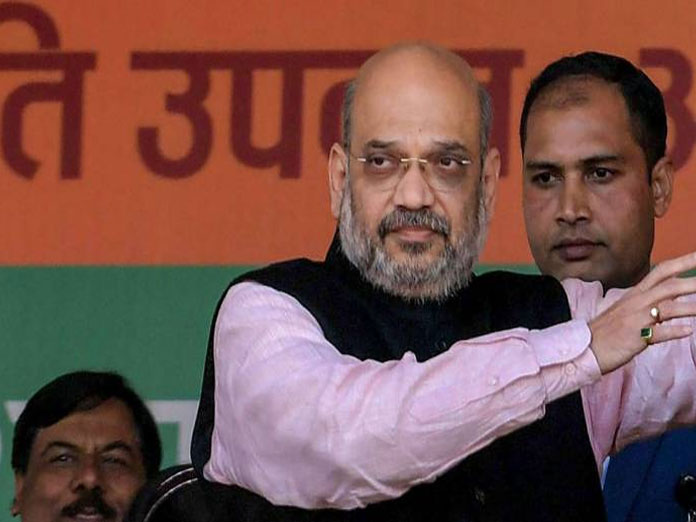 People will give Gandhi a reply for (saying) it during the ensuing Lok Sabha polls, the BJP leader said.
BJP president Amit Shah on March 7 said Congress chief Rahul Gandhi should feel ashamed of asking for proof of India's air strike on a terror camp in Pakistan.

People will give Gandhi a reply for (saying) it during the ensuing Lok Sabha polls, the BJP leader said.

Addressing the party's booth-level workers at Bamora near Sagar town in Madhya Pradesh, Shah said an IAF official at a press conference asserted that the IAF had hit terror targets.

Even after this conclusive statement, Gandhi is insulting thousands of martyrs of India by asking for evidence of the air strike, Shah said.

The IAF conducted air strike last month on a camp of Jaish-e-Mohammed in Pakistan, in retaliation to the terror outfit's attack at Pulwama district in Jammu and Kashmir in which 40 CRPF personnel were killed.

Earlier "only two countries" were known for avenging attack on their forces. "Modiji has now ensured India's name is also counted among such countries," he said.

In the last 25 years, Modi has not taken a single vacation, Shah said. He targeted Gandhi for "going on vacations frequently."

The country has got a prime minister who works for 18 out of 24 hours a day and is very dedicated towards the nation, the BJP chief said.

"What the Modi government has done in 55 months of rule, the Congress was unable to do in 55 years with Gandhi family's four generations ruling the country," he said.

The Modi government brought a major change in the country by implementing 135 welfare schemes, including Ayushman Bharat, Rs 6,000 per annum for small and marginal farmers and Rs 3,000 pension for labourers, Shah said.

People of the country are with the BJP and would again vote for the party in the ensuing polls, he said, asking BJP workers to work hard in the next two months.