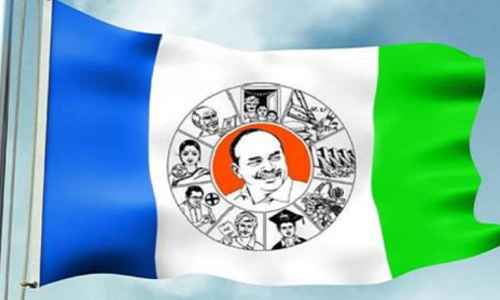 Heavy police bandobaste has been deployed in the village to prevent untoward incidents. Police imposed restrictions over the entry of new comers by seizing the borders of the village.

As part of protecting law& order police taken some villagers in to their custody. According to the sources as part of electioneering YSR Congress nominee Dr Sudheer Reddy along with former MP YS Avinash Reddy and party functionaries came to Sunnapuralla palli around 10. 45 AM on Saturday.

It is reportedly said some villagers restricted them at the borders by entering heat exchange with the YCP leaders leads prevailing Tension in the village.

When contacted by Hans News Service Avinash Reddy said following invitation from the villagers they came to the village to conduct meeting.Alleging that Adinarayana Reddy family was responsible in running paralal administration some parts of Jammalamadugu assembly segment.

The former MP recalled that about 200 acres of land which was allocated to 100 people under house sites during the regime of YS Rajasekar Reddy, not handed over to the beneficiaries as they were under ender enjoyment of Adinarayana Reddy family and his followers.

He said about 60 percent people in Jammalamadugu constituency prepared to franchise their vote in favor of YSR Congress in ensuing elections. He alleged the not able to digest this development Adinarayana Reddy family creating hurdles.

Meanwhile the police administration has set up pickets in the village by enforcing section 144 to bring normalcy.