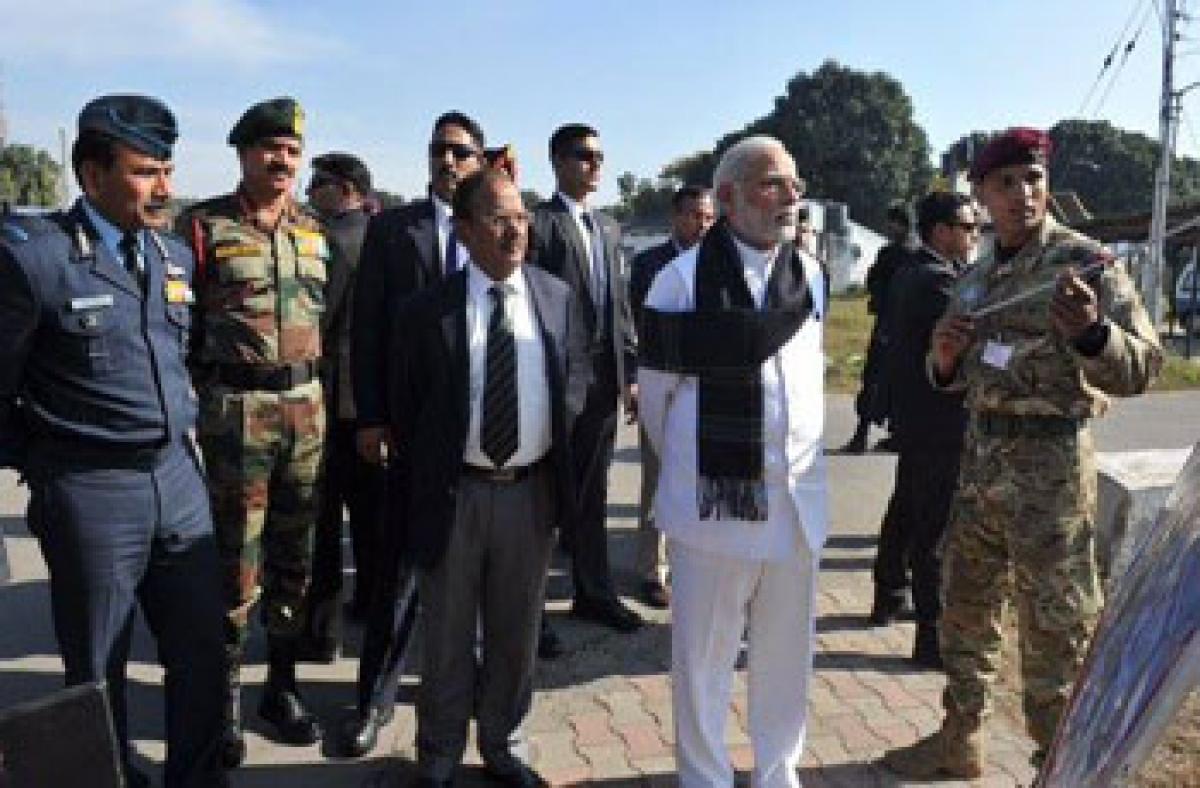 In a tumultuous fortnight, during which many an illusion was shattered at the turn of the year, some home truths emerged in the chronically accident-prone ties between India and Pakistan. One, contrary to what was speculated, the decision to drop by in Lahore was taken at the spur of the moment by Prime Minister Narendra Modi while he was in Kabul.

In a tumultuous fortnight, during which many an illusion was shattered at the turn of the year, some home truths emerged in the chronically accident-prone ties between India and Pakistan. One, contrary to what was speculated, the decision to drop by in Lahore was taken at the spur of the moment by Prime Minister Narendra Modi while he was in Kabul. Senior officials, preparing for the last leg of their trip to New Delhi, were taken aback when it was conveyed to them by prime ministerial aides that he was all set to tweet on his impending visit to Pakistan -- an announcement Modi thought he needed to make himself in order to surprise the world.

Second, Prime Minister Nawaz Sharif took care to include none from his own foreign or security officialdom in his delegation that held impromptu talks with the Indian delegation at Raiwind. The Pakistan Amy, represented in the government through the new National Security Adviser, Lt Gen Naseer Khan Janjua, was not welcome at the gathering of the Sharif clan that was in the midst of a family celebration occasioned by his granddaughter's wedding. Foreign Secretary Aizaz Ahmed Chaudhry happened to be playing golf in Lahore on Christmas Day but his services were only requisitioned for the media briefing after the talks where Modi was accompanied by his senior officials, including National Security Adviser Ajit Doval and Foreign Secretary S. Jaishankar.

In the end, both unconventional acts of two leaders aspiring for greater glory boomeranged on them, as they both apparently miscalculated its potential blowback. The Pathankot assault, which could not but have been on the drawing board of options of the attack masterminds for some time, threatened to take that one bold but uncalibrated step into a two-step reversal and could have potentially become yet another South Asian flashpoint had the marauders succeeded in destroying some air force assets or had inflicted casualties on the 3,000-odd families at the air base.

It is obvious there were no preparations for the second Lahore 'summit' (the first one was between Sharif and former Indian prime minister Atal Bihari Vajpayee in 1999). There was a meeting between the two national security advisers in Bangkok, followed by a visit by Indian External Affairs Minister Sushma Swaraj to Islamabad for an international conference on Afghanistan. Sushma Swaraj's talks in Pakistan were to set the stage for resumption of the foreign secretaries's structured dialogue in mid-January and -- in a calibrated manner if all went all -- was to culminate in the visit by Prime Minister Modi to Islamabad in November 2016 to attend the SAARC Summit, much like Vajpayee had done in 2004.

While Modi fast-forwarded his visit to Lahore in an almost impulsive fashion, in what was then lauded as an act of statesmanship and diplomatic derring-do, in retrospect Modi could not but have been red-faced when he got the news about the Pathankot attack within barely a week of his triumphant return from Lahore.

It was obvious to mature practitioners of international diplomacy that Modi, a man in a hurry to create history in a relationship that has confounded the world and become one of the trickiest (and deadliest) global problems in modern times, tried to short-circuit the sometimes arduous, trying and painstaking processes that go into preparations for summit meetings in order for them to produce measurable results for the countries involved and their people.

Reflecting 14 years later on the failure of the Agra Summit between Vajpayee and then president Pervez Musharraf in 2001, which so disappointed and even enraged the latter, former Pakistan foreign minister Khurshid Mahmud Kasuri has this to say in his eminently readable memoir "Neither a Hawk nor a Dove" (Penguin): "In my opinion, one should not expect miraculous results from any summit meeting unless proper preparations are made beforehand. Perhaps this was the reason for the failure of the Agra Summit."

While Modi is a newbie in the conduct of global affairs and has, to his credit, so far done a great job of it and earned plaudits from world leaders for the way he has advanced India's interests and earned recognition for the country at global head tables, Sharif, a political veteran, ought to have known better than keeping the Pakistan Army at a distance while confabulating with "arch enemy" India.

The role of the ISI (read Pakistan Army) in planning the Pathankot operation is becoming increasingly clear, a thinking endorsed by no less an authority than Bruce Riedel, a counter-terrorism specialist and former CIA analyst. It was a clear signal to Sharif that any political adventurism, without taking the army into confidence, would not be appreciated and would be undermined and sabotaged -- if so required.

The Pakistan Army, an institution that has always been central to the politics of Pakistan, has played a key role in its defence and foreign policy. As Stephen Cohen, in his seminal work on "The Pakistan Army" (Himalayan Books), noted, the Pakistan Army "always regarded itself as the special expression of the idea of Pakistan. Because the military continues to hold one rein of political power in Pakistan, it continues to exercise its right and influence by what Cohen calls "injecting directly into the Pakistan foreign-policy-making process" its "partial perspectives on foreign affairs".

And the result was for Pakistan, India and the world to see.

So, will the Pakistan Army play the spoiler every time relations show some forward movement? It has been said that the only real progress in India-Pakistan ties were made when the military, led by Gen Musharraf, was in power and that the Kashmir dispute was on the cusp of a breakthrough when a politically overconfident Musharraf sought to rock the establishment by taking on the powerful chief justice, Iftiqar Ahmed Chowdhry, and tried to oust him. The establishment hit back and, together with powerful mullahs who also felt they were under siege following the Lal Masjid operation, saw to the ouster of Musharraf -- and with him went any hope of a "final resolution" of the Kashmir imbroglio, if at all there was one.

If one assumes that strategic political miscalculations were made on both sides, where lies salvation? Will Pakistan's civilian leadership assert itself in the eyes of not just India but the world and take cognisable action against the Bahawalpur-based Jaish-e-Mohammed terror outfit that India accuses of masterminding the Pathankot action? Will the Pakistan Army allow its proteges to be sacrificed under pressure?

Going by Cohen's reading (Cohen is an acknowledged expert on Pakistan) of the Pakistan Army and its psyche, the outlook appears bleak. "The Pakistani military is part of a whole that does not fully exist. By force of will and threat of a gun, the generals have controlled the politics of Pakistan, but they do without full training, experience or legitimacy.

"And when the folklore of the officers' mess become state policy, disaster is not far away."