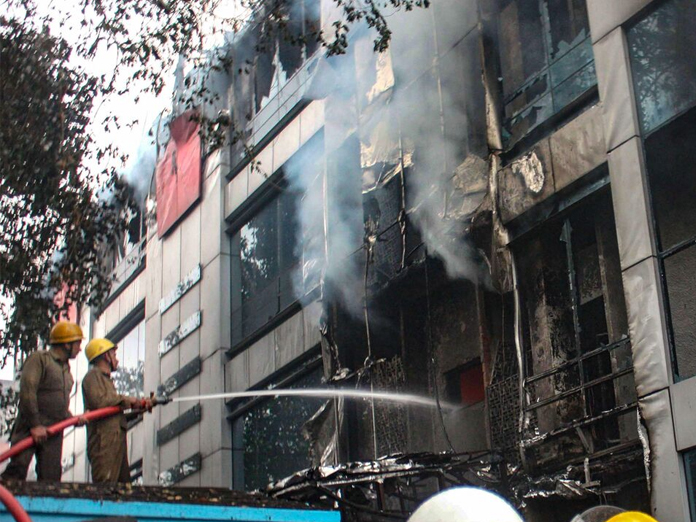 “The fire at Archies factory was reported at 7.10 am. Twenty-three fire tenders were rushed to the spot. Later, seven more were dispatched,” said a Delhi Fire Services official.

Prima facie a short circuit at the corporate office on the first floor of the building is believed to have caused the fire, the officer said. “The fire was controlled by 11.15 am and the cooling process was initiated. No one was injured in the incident,”said the official.

The building, located in Naraina Industrial Area, Phase I, is spread across 20,000 square feet. The factory operated at the rear-end of the building, while the front served as the corporate office of Archies Gallery.

The factory manufactured cards and gift items for Archies Gallery. Fire personnel said the building was full of cards and gifts and they found it difficult to control the blaze due to large amount of paper and plastic material.

“The cards were packed in plastic. As we poured water on them, the water floated on the surface. It was very difficult to douse the flames,” officials said. They said it was too early to say whether the building has valid fire NOC, but it will be verified soon.

“The factory's guards first tried to douse the blaze with the help of fire extinguishers. However, they were unable to do so as there wasn't sufficient carbon dioxide in the extinguishers. Following which, they called the Fire Department,” Sunil Kumar, an employee of the factory, said.

The building has a fire safety certificate and it is equipped with fire-fighting equipment, including extinguishers, alarms and fire jets, said another factory employee.

It is suspected that the fire alarms did not function due to short circuit, he said. Around 200 employees worked at the facility. At the time of the incident, none of them were there, he said. The office opens at 9 am and employees leave at around 6 pm.

The Naraina fire incident comes close on the heels of a fire tragedy at a Karol Bagh hotel which claimed 17 lives.

This was the third major fire this week in the national capital. Around 250 shanties were gutted in a fire at Paschim Puri on Wednesday, but no casualty was reported.