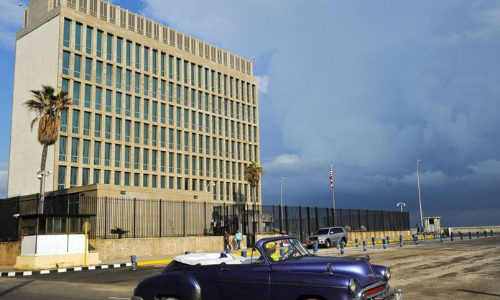 Suspected sonic attacks on US embassy staff in Cuba are believed to have been caused by the sound of crickets, scientists have claimed

Suspected sonic attacks on US embassy staff in Cuba are believed to have been caused by the sound of crickets, scientists have claimed.

A diplomatic row broke out in 2017 after US officials claimed government workers in Havana had been targeted with covert devices.

At least 22 US personnel were said to have been "medically" affected, with some reporting permanent hearing loss and traumatic brain injury.

It prompted the US to pull 60% of its staff out of Cuba and urge its citizens not to visit the Caribbean island.

Researchers in the UK and US now say there is "strong evidence that an echoing cricket call, rather than a sonic attack or other technological device" was responsible for the noises.

They studied audio recorded by US staff in Cuba which was released by the Associated Press in 2017.

The sound matched "in nuanced detail" the calling song of the Indies short-tailed cricket, known as Anurogryllus celerinictus, according to researchers.

They said playing the crickets' call on a loudspeaker when recorded indoors produced a sound "virtually indistinguishable" from the alleged sonic attacks.

"This provides strong evidence that an echoing cricket call, rather than a sonic attack or other technological device, is responsible for the sound in the released recording," the researchers said.

They added that their findings highlighted the need for "more rigorous research" into the source of the injuries suffered by embassy staff, including potential psychological causes.

At the time of the diplomatic row, Cuba denied any involvement or knowledge of the alleged sonic attacks.

The US did not directly blame Havana, but accused President Raul Castro's government of failing to protect American personnel.

Employees were said to have been targeted in hotels and official residences, not in the US embassy itself.

All non-essential staff and their families at the embassy were ordered to leave, with only "emergency personnel" allowed to remain.

Then-White House chief of staff John Kelly said: "We believe that the Cuban government could stop the attacks on our diplomats."

Last May, a US embassy worker in China reported experiencing "abnormal sensations of sounds and pressure" amid fears of a "sonic attack".

The US state department issued a health alert to its citizens in the country, adding that the unnamed staff member's symptoms indicate a "mild traumatic brain injury".