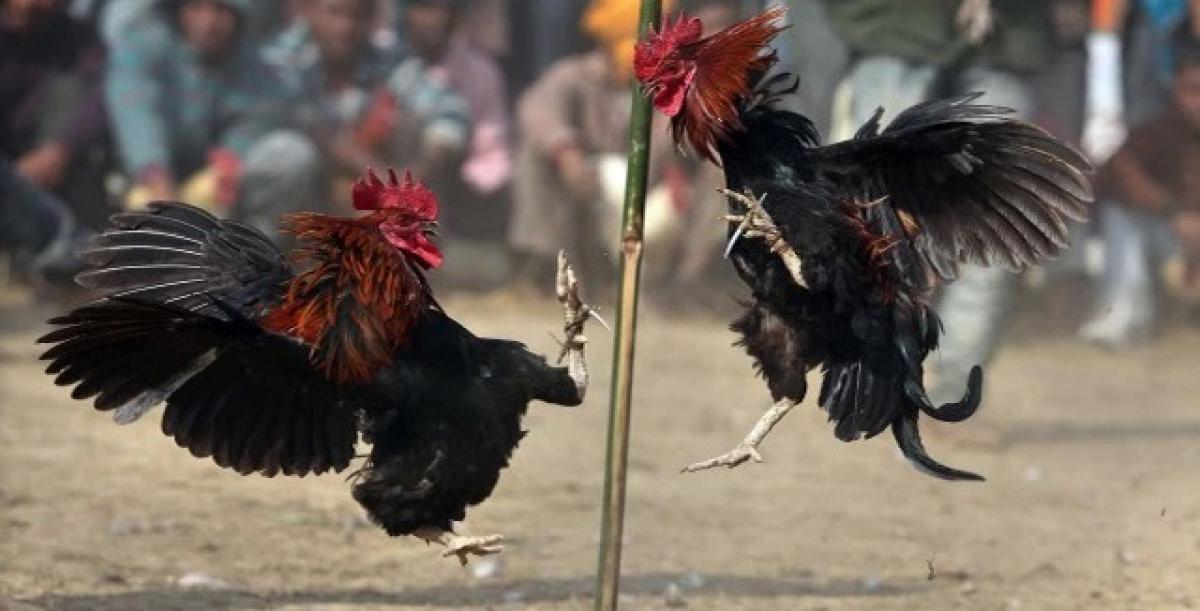 As the grand festival of the harvest season descends, the unrelenting cock fights come to the fore, rudely questioning the rule of law....

As the grand festival of the harvest season descends, the unrelenting cock fights come to the fore, rudely questioning the rule of law. Notwithstanding clear legal provisions, the ruling establishment that swears by the word of the Constitution turns into a passive spectator if not an accomplice in the violation of the law of the land as well as judicial pronouncements therein.

The political establishment becomes subservient to the appeasement of the so-called tradition that has of late got vulgarised and vandalised into dirty interplay of money, liquor and undesirable tendencies. The competitive political populism holds the society to ransom as the official machinery becomes an accomplice to the brute force.

The spectacle of cock fights thus thrives in the name of customs, traditions. Systems succumb to the medieval practices like bull fights, cock fights often portrayed as the symbols of local cultural pride. The law makers, the law enforcing agencies, the political and public representatives of all hues take pride in actively participating in these cock fights where even illegal speculative money market flourishes.

Legal Position
Let's begin with the legal position on the vexed question. The law is very clear. The courts were unequivocal. Only the executive fails to enforce.

Cock fights are patently unlawful.
The Section 11 of the Prevention of Cruelty to Animals Act 1960 (PCA) expressly prohibits animal-fighting of any kind. A person will be punished if he or she beats, kicks, over-rides, over-drives, over-loads, tortures or otherwise treats any animal so as to subject it to unnecessary pain or suffering or causes, or being the owner permits, any animal to be so treated.

The same section also treats any of the following acts as crime: 1. Wilfully and unreasonably administers any injurious drug or injurious substance to any animal or wilfully and unreasonably causes or attempts to cause any such drug or substance to be taken by any animal; 2. Conveys or carries, whether in or upon any vehicle or not, any animal in such a manner or position as to subject it to unnecessary pain or suffering; and, 3.

Organises, keeps, uses or acts in the management or, any place for animal fighting or for the purpose of baiting any animal or permits or offers any place to be so used or receives money for the admission of any other person to any place kept or used for any such purposes.

Reports suggest that drugs are administered to energise cocks to fight ferociously. Even knives are tied to them during the fights. Such acts come under cruelty towards animal and the law unequivocally prohibits them.

Tradition vs. Law
Cock fights are often defended on the ground that they are integral to local culture, customs, traditions and practices associated with such festivities. But, cruelty towards animals cannot be defended in the name of culture or tradition. In fact, in any society based on rule of law, if one comes into conflict between law and tradition, it is the law and the law alone that prevails.

The apex court in its judgment in Animal Welfare Board versus A Nagaraja of May 7, 2014 has clearly stated: “PCA Act, a welfare legislation, vie with tradition and culture.” The apex court in the said verdict further reiterated that animal fight certainly comes under the definition of cruelty. Being dumb and helpless, they suffer in silence, the court observed.

Exemption in Law
Yet another popular defence of cock fights is: What is wrong with cockfights when we kill them for meat? But, the Supreme Court in the judgement aforementioned effectively silences critics of the law when it observed: "We have to examine the various issues raised in these cases, primarily keeping in mind the welfare and the well-being of the animals and not from the stand point of the Organisers, Bull tamers, Bull Racers, spectators, participants or the respective States or the Central Government, since we are dealing with a welfare legislation of a sentient being, over which human beings have domination and the standard we have to apply in deciding the issue on hand is the “Species Best Interest” subject to just exceptions, out of human necessity.”

The gladiatorial and mere entertaining value of cock fights cannot be in any way justified as human necessity for which the law gives an exemption.

Defending the Weak
The law aimed at preventing cruelty towards animals is a welfare legislation. The Indian jurisprudence is categorical when it states that any interpretation of such a law and its application should bear in mind the spirit of such a welfare legislation rejecting any other extraneous consideration. The apex court in the Animal Welfare Board vs. A Nagaraja case has made this clear.

The court observed, "It is trite law that in the matters of welfare legislation, the provisions of law should be liberally construed in favour of the weak and infirm. Court also should be vigilant to see that benefits conferred by such remedial and welfare legislation are not defeated by subtle devise.

Court has got the duty that, in every case, where ingenuity is expanded to avoid welfare legislations, to get behind the smoke-screen and discover the true state of affairs.

Court can go behind the form and see the substance of the devise for which it has to pierce the veil and examine whether the guidelines or the regulations are framed so as to achieve some other purpose than the welfare of the animals.”

Therefore, the law of the land and the judicial pronouncements on it are sympathetic towards cocks rather than the organisers of cock fights. The welfare of the cocks is of paramount importance than the custom, tradition or any other considerations of those who derive vicarious pleasure form such animal fights.

Doctrine of parens patriae
The apex court further observed, “The welfare of the animals or birds should be the basis for any legal scrutiny of such practices involving these creatures which cannot defend themselves in any court of law. Court has also a duty under the doctrine of parens patriae to take care of the rights of animals, since they are unable to take care of themselves as against human beings.”

In the "Words and Phrases" Permanent Edition, Vol. 33 at page 99, that provides a plain meaning of legal language, it is stated that parens patriae is the inherent power and authority of a legislature to provide protection to the person and property of persons non sui juris, such as minor, insane, and incompetent persons.

Therefore, it needs no further explanation to conclude that the State has the legal, moral obligation to protect the birds and animals from the cruelty of the human beings.

Whither Culture?
The cock fights cannot even be defended on the grounds of culture or tradition. As early as 1500- 600 BC in Isha-Upanishads, it is professed as follows: “The universe along with its creatures belongs to the land. No creature is superior to any other. Human beings should not be above nature.

Let no one species encroach over the rights and privileges of other species.” As the Supreme Court said, “Every species has an inherent right to live and shall be protected by law, subject to the exception provided out of necessity.”

Fundamental duty
Article 51A (g) of the Constitution of India enjoins that it is a fundamental duty of every citizen “to have compassion for living creatures,” which means concern for suffering, sympathy, kindliness etc., which have to be read along with Sections 3, 11 (1)(a) & (m), 22 etc., of the PCA Act. Every species in nature has a right to life. (Writer is former Editor of Hans India and former Member of Legislative Council)