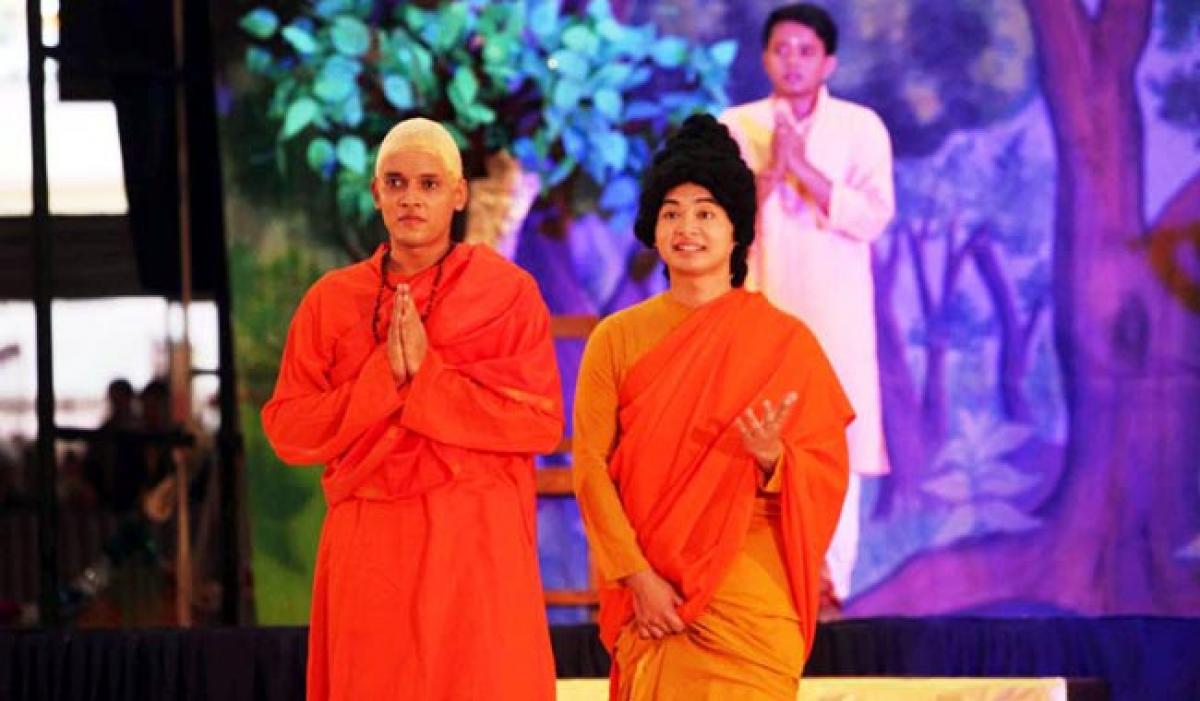 The drama began with a conversation between a 'Guru' and a 'disciple' on the subtleties and intricacies of the relationship between 'guru' and 'disciple'.

With stories galore from the 'past masters' illustrious lives, the presentation sought to answer the question as to 'Who Am I?'... that the Guru is not a mere mortal frame, but the inherent, yet all-pervading supreme principle.

Pushing this truth upfront, the presentation traversed through the lives of the likes of Paramahamsa Yogananda, Naren turned Vivekananda, Shirdi Sai episode involving a goat and Dixit, Ananda of Buddha's time, etc.

Episodes depicted were that of Yogananda's earlier days of yearning for 'Guru' and his chance-encounter with Sri Yukteshwar Giri, who turned out to be his eternal 'Guru' companion, Naren turned Vivekananda's unique experience with his 'master' Sri Ramakrishna Paramahamsa, wherein Paramahamsa kicks his young disciple into ecstasy of 'supreme bliss', the story of implicit obedience to the 'Guru' from the Shirdi Sai episode, wherein Kakasaheb Dixit gets ready to act with implicit obedience without entertaining any second thought, handling a tough, wanting situation of killing an innocent goat, Ananda's story of attachment and suffering owing to separation from Gautama, only to get 'enlightened' that Guru is not a mere mortal, but the all-pervading Principle of Supreme Truth.

The grateful students offered the presentation to the Ultimate Sadhguru Bhagawan Sri Sathya Sai pledging to walk His path. The presentation ended with a group song on the greater glory of Sadhguru.

As the days swiftly tread on to the auspicious full-moon night of Guru Purnima, this evening's drama presentation at the Feet of the Supreme Sadhguru served as a 'Sailent' reminder of the greater glory of the Sadhguru principle.

Bhajans continued and the session ended with Mangala Arathi at 1820 hrs.