Test No 500 for India from today 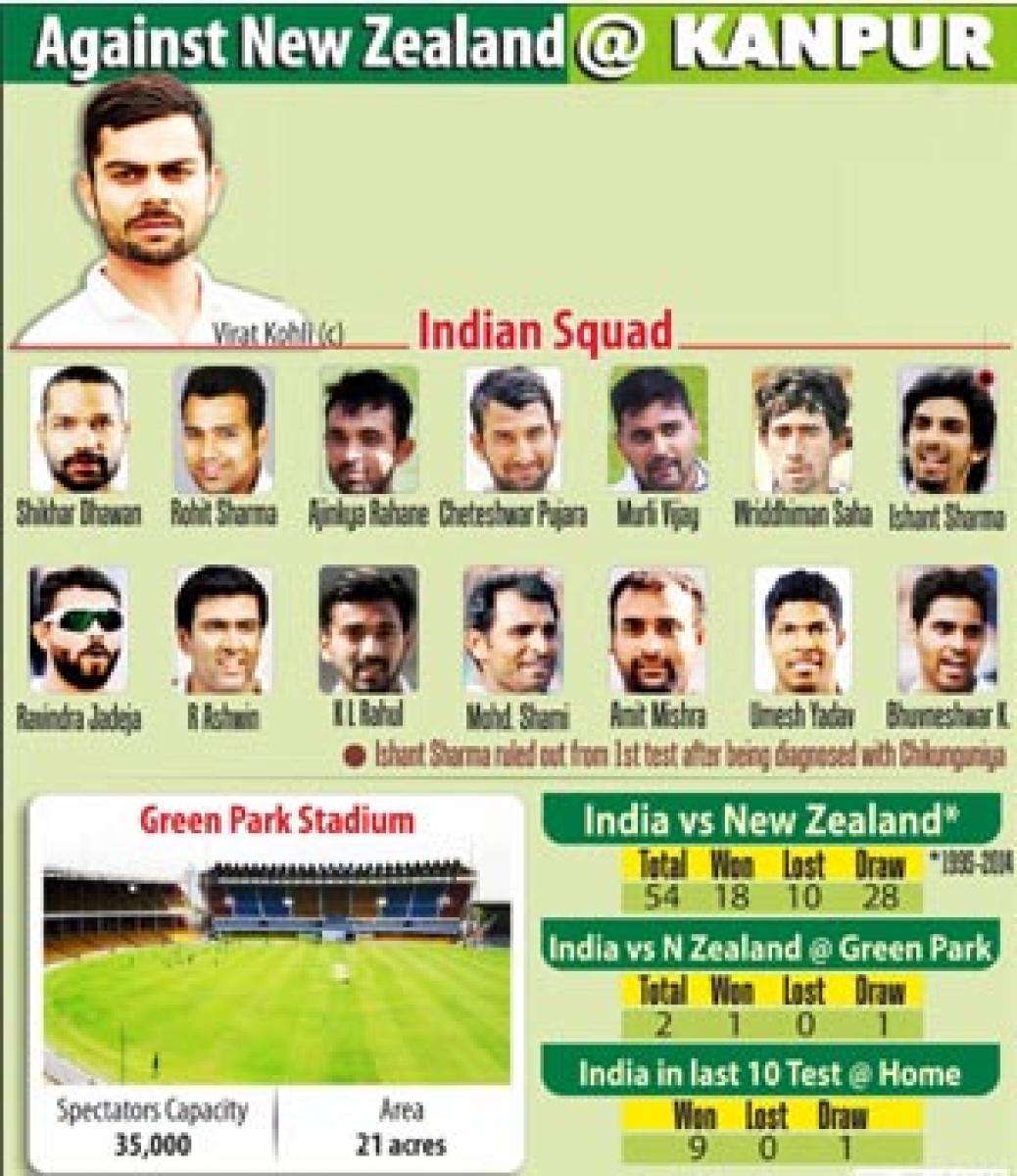 Off-spinner Ravichandran Ashwin will be leading the Indian bowling attack while Kiwi skipper Kane Williamson is the star batting attraction for the visitors.The Green Park pitch here promises to be a spinfriendly wicket and the Indian tweakers will play a major role in the hosts\' ambition to become the top team. But all

Kanpur : Hosts India will be targeting the Test team top spot when they face New Zealand in their historic 500th match starting here on Thursday.The contest is primarily being viewed as a battle between the New Zealand batsmen and the spin-oriented Indian bowlers in conditions favouring the home team in the three-match series.

Off-spinner Ravichandran Ashwin will be leading the Indian bowling attack while Kiwi skipper Kane Williamson is the star batting attraction for the visitors.The Green Park pitch here promises to be a spinfriendly wicket and the Indian tweakers will play a major role in the hosts' ambition to become the top team. But all their plans can be dampened by rain as heavy downpour is forecast in the city's next six-day weather reports.

Going by the spin-heavy conditions, Kohli will have no hesitation in going in with his spin trio Ravichandran Ashwin, Ravindra Jadeja and Amit Mishra. On the other hand, the Kiwis had only played a warm-up game against Mumbai in Delhi, where their bowlers conceded runs.

A rib injury to all-rounder Jimmy Neesham, who has been ruled out of the first Test, has also hampered their preparations.He is expected to be fit for the second Test, beginning on September 30 in Kolkata, hence New Zealand have opted not to name any replacements.He picked up the injury during training last Thursday, and it had affected his participation in the warm-up fixture against Mumbai in Delhi. He didn't bat in either innings and bowled just five overs.

In the batting department, the Kiwi batsmen did not step up to the occasion as Martin Guptill, one of their best batsmen in recent times, lasted a mere 21 balls in his two innings. The Mumbai batsmen dominated the practice match with three batsmen striking a century each in the first innings.India will also be without their experienced Delhi pacer Ishant Sharma, who is recovering from the mosquito-borne viral infection chikungunya.

The series will be a big test for the seasoned Rohit Sharma and opener Shikhar Dhawan, whose talent has always been a topic of discussion.Speaking ahead of the match, India skipper Virat Kohli stressed on being positive and advised the players to handle the situation pro-actively.

"The key is to remain positive and at the same time be solid and handle situations pro-actively," Kohli said in a pre-match press conference on Wednesday.A 1-0 or 2-1 win will take India to 111 points, similar to current top spot holder Pakistan but ahead of them on decimal points while a 2-0 win margin will see India surge ahead at 113 points. A 3-0 win will move India to 115 points. New Zealand, which is currently on 95 points, will remain at the seventh position with any of these margins with the maximum drop to 91 points in case they lose all the three matches.

A 1-1 series draw will result in India dropping to the fourth position on 108 points and New Zealand rising to fifth on 97 points.If New Zealand is able to beat India by 1-0 or 2-1, they will move to the fifth position at 100 points with India one slot ahead on fourth with 104 points. New Zealand can overtake India to take the fourth position only with an improbable 3-0 win.Should India go to the top of the rankings, it would be the third time this year and fourth overall.