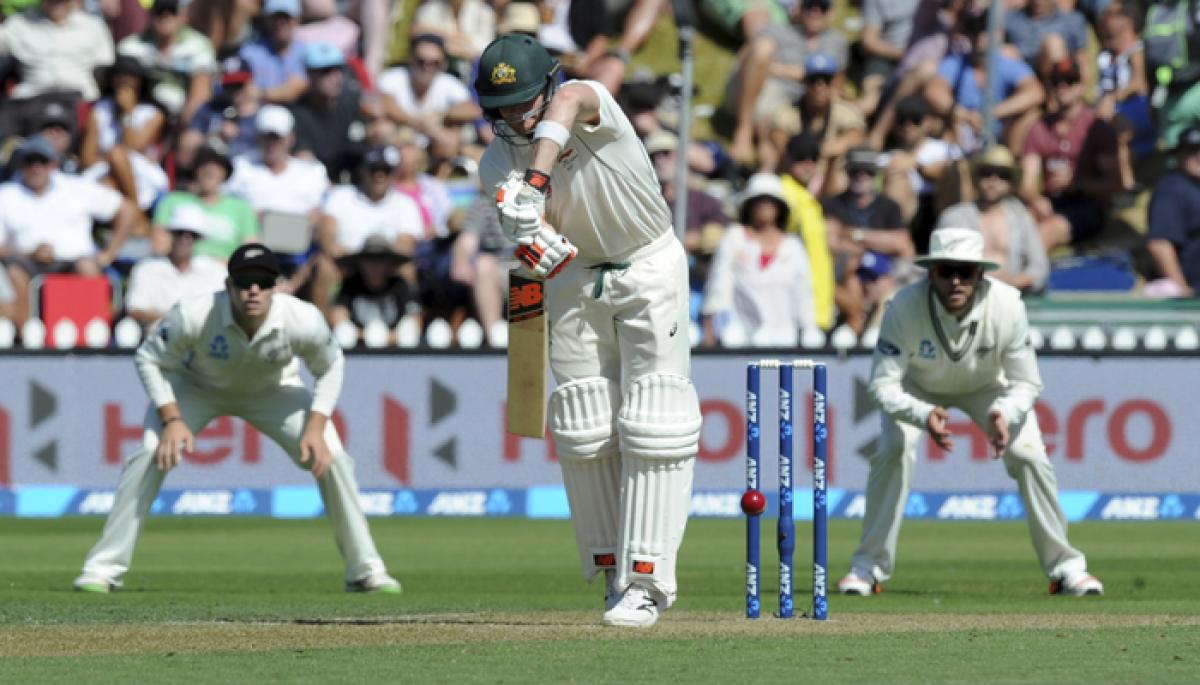 Left-arm spinner Ravindra Jadeja struck crucial blows for India even as Australia rode skipper Steven Smith\'s steady batting to post 401/7 in their first innings at lunch on the second day of the third cricket Test here on Friday.

Left-arm spinner Ravindra Jadeja struck crucial blows for India even as Australia rode skipper Steven Smith's steady batting to post 401/7 in their first innings at lunch on the second day of the third cricket Test here on Friday.

Jadeja picked up three wickets in the first session of the day to notch up figures of 4/106.

The visitors started the day on a positive note with Maxwell bringing up the first runs of the day with a boundary.

The right-hander quickly completed his maiden century in the longest format of the game, reaching the landmark by guiding an Umesh Yadav delivery to the third man boundary.

Maxwewll, who is playing in only the fourth Test of his career, departed shortly afterwards when a Jadeja delivery landed on the off-stump line and spun away viciously. The ball kissed the outer edge of Maxwell's bat as Indian wicketkeeper Wriddhiman Saha pulled off an excellent catch.

Maxwell scored 104 runs off 185 balls with six hits to the fence. It was a rare display of patience and endurance from the right-hander who had scored only 80 runs in the three Tests he had played previously in his career.

He put on a partnership of 191 runs with Smith to give the visitors the upper hand following the loss of four early wickets on the first day of the Test match.

Matthew Wade joined Smith in the middle and the duo proceeded to add 64 runs between them before Jadeja struck twice in quick succession.

Wade seemed to be in good form, scoring 37 runs off the 50 balls he faced. He seemed on track for a half-century but was outfoxed by a Jadeja delivery which kept straight after pitching.

Wade, who played for the turn, only ended up handing an edge to Saha.

Pat Cummins survived all of two deliveries before Jadaja bowled him with a beautiful delivery. The ball landed on the middle and leg stump line and spun away viciously, beating the outside edge of the bat to hit the off-stump.

Jadeja almost dismissed Smith in the last over before lunch, but the ball landed just short of the slip cordon.