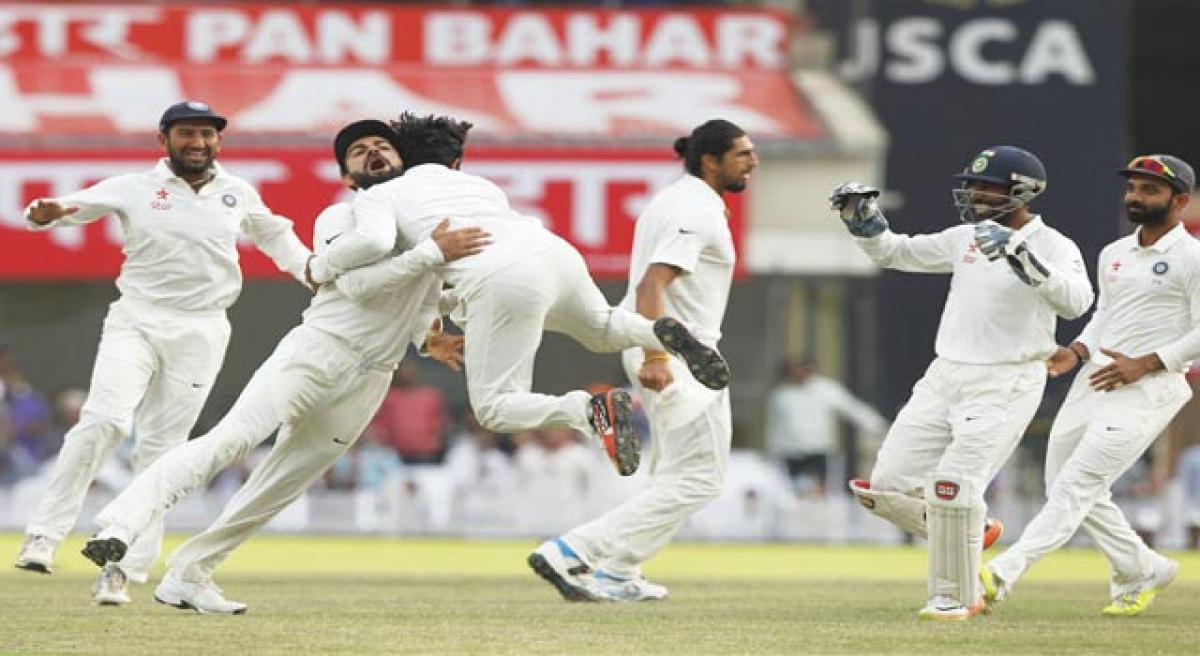 Cheteshwar Pujara\'s marathon double hundred complemented by Wriddhiman Saha\'s dogged century put India in complete command with an imposing total of 603 for 9 against Australia on the fourth day of the third cricket Test.

Ranchi: Cheteshwar Pujara's marathon double hundred complemented by Wriddhiman Saha's dogged century put India in complete command with an imposing total of 603 for 9 against Australia on the fourth day of the third cricket Test. With a substantial lead of 152 in their kitty, Indian bowlers then went all out as Australia were tottering at 23 for 2 when stumps were drawn.

Ravindra Jadeja (2/6) got a couple of deliveries to land on the rough and breach through the defences of David Warner 14) and Nathan Lyon (2).
An overjoyed Virat Kohli was seen patting his heavily strapped injured shoulder after Warner's dismissal, an obvious reference to Glenn Maxwell's mocking on Saturday.

The match has undoubtedly been set up by Pujara's (202) marathon vigil which lasted for more than 11 hours (672 minutes). He faced 525 deliveries most by any Indian batsman in an innings surpassing Rahul Dravid's Indian record of 495 balls against Pakistan at Rawalpindi back in 2004.

The Saurashtra right-hander hit 21 boundaries in his third Test double hundred adding a record 199 runs for the seventh wicket stand which could well prove to be a game-changer. Wriddhiman also played his part to perfection en route his career-best score of 117.

This was the third Test century for the wicketkeeper-batsman, who has now cemented his place in the team. He faced 233 balls hitting eight fours and a six. Number 8 Wriddhiman oozed maturity as he complemented Pujara's solidity with his calm demeanour. Pujara-Wriddhiman had two wicketless sessions.

Pujara finally ran out of steam for a simple catch to Glenn Maxwell at short midwicket. Contrary to prediction, the fourth day pitch of Mahendra Singh Dhoni's home venue held up as spinners extracted turn from the roughs while pacers had to rely on reverse swing.

The benign nature of the surface would seem to be a draw on the cards but Jadeja who grabbed a first innings fifer would be tempted to exploit the roughs after his twin bursts in a big Test for the visitors to retain the Border-Gavaskar Trophy on the final day on Monday.

Resuming on 390 for 6 under overcast conditions, Pujara and Saha refused to get out and left Aussies all the more frustrated with their profligate use of DRS. Wriddhiman got to his third Test century with an easy glance to square leg in the first ball after tea, while three overs it was Pujara's turn to get to his third double ton as the duo went on and on.

If their dogged partnership was not enough, India piled on the Aussies misery by successfully using referrals twice when Wriddhiman was on 19 and Pujara on 157. Australia were left frustrated more when their review for a catch off a sweep shot of Saha in the last over before lunch was overturned.

Pujara, who also has two double tons, posted his second 150 in Tests in 391 balls guiding Lyon for a single as the whole team gave him a standing applause. In the next over, Pujara's edge off O'Keefe flew down the slip cordon past Smith as nothing went for Australia in the wicketless first session.

Overnight 130, Pujara who has three triple hundreds in first class cricket, remained focused throughout and restrained from playing any risky shot which was was the hallmark of his innings. Pujara later overcame his the record of his 'role model' Dravid who had faced 495 balls in his 270 against Pakistan in April 2004.

It was a throwback to their 316-run unbroken second innings partnership in Rest of India's Irani Cup earlier this year, Pujara and Saha looked indefatigable and refused to get out after India resumed on 390/6 under overcast conditions.

Australia took the new ball after lunch with Josh Hazlewood and Pat Cummins bowling in tandem but Pujara and Saha's patient approach on an eased-out wicket continued to elude them the breakthrough. The Aussie pace duo tested the duo with rising deliveries, with one by Cummins hitting Saha's chest but the wicketkeeper batsman remained unperturbed and posted his second century in four Tests, with the last one coming against Bangaldesh in Hyderabad last month.

Jadeja (54, 55 balls) used the long handle to good effect and stretched the lead to 150 plus with the Australian bowlers finding little assistance from the surface. Left-arm spinner Steve O'Keefe sent down a record 77 overs picking 3/196 in the process. The number of overs bowled by O'Keefe is highest by an overseas bowler on Indian soil. Comeback man Pat Cummins was the most successful bowler bagging 4/106 in 39 overs.

It was a laudable effort considering the pace at which he bowls and the fact that he was playing Test cricket after a long time. But Nathan Lyon (1/163 in 46 overs) was a disappointment once again. Australia, with their strong batting line-up, would be hoping that they can bat out for a draw on the final day before going for the jugular in Dharamsala. But a fifth day pitch is likely to ask a few tough questions as they still need 129 runs to avoid an innings defeat.