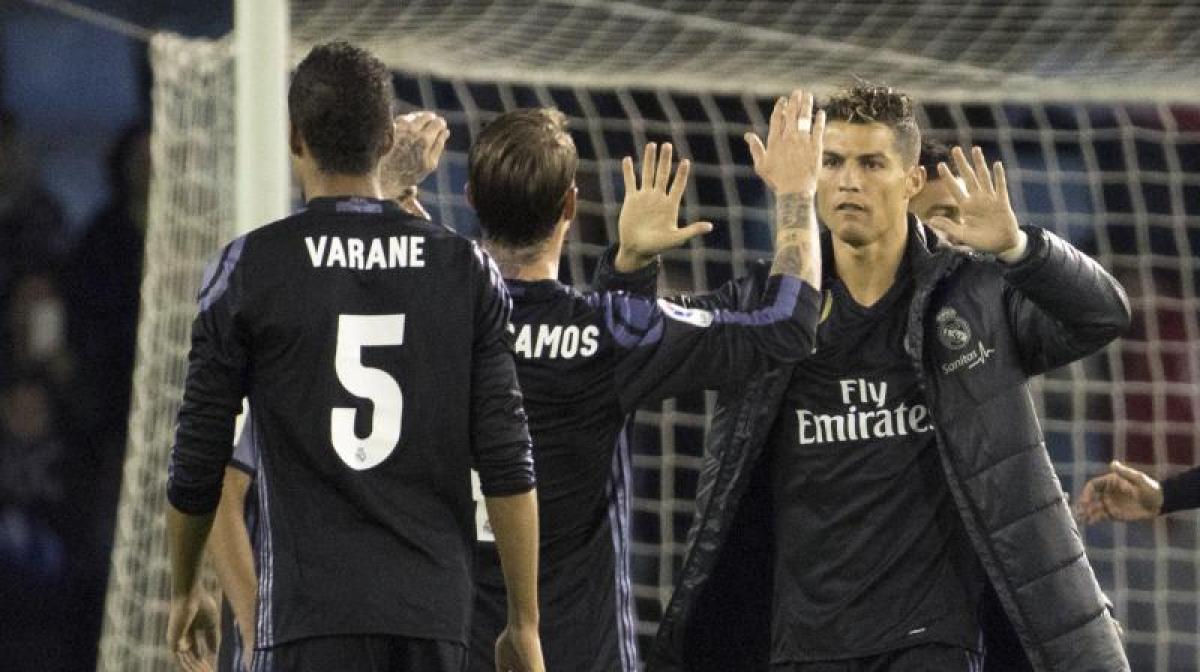 \"The first half was end to end and that doesn\'t suit us, we were much better with the ball in the second and we played a little better,\" added Zidane.

An insatiable Cristiano Ronaldo fired Real Madrid to a 4-1 win over Celta Vigo on Wednesday to take Zinedine Zidane's side three points clear at the top of La Liga and within touching distance of winning a first league title in five years.

Real top the standings on 90 points meaning they need just one point from their remaining league game at Malaga on Sunday to finish ahead of Barcelona and lift a first title since Jose Mourinho's 2012 success.

Ronaldo lashed into the near corner from outside the area to put Real in charge in the 10th minute with a goal that moved him ahead of former England striker Jimmy Greaves as the all-time leading scorer in Europe's top five leagues on 367 goals.

The prolific Portuguese doubled his and Real's tally in the 48th minute by latching onto a through ball from the impressive Isco and tucking it in off the near post to take Madrid closer still to a 33rd league success.

Celta's Iago Aspas was later sent off for a second booking for diving although the home side briefly clawed their way back into the match when John Guidetti's deflected strike looped over Keylor Navas in the 69th minute.

Karim Benzema quickly extinguished any comeback hopes by nudging home a Marcelo cutback from close range and the Frenchman and Ronaldo each wasted chances late on to add to the scoring before Toni Kroos knocked in the fourth in the 88th minute.

"The most difficult part is still to come even though we're getting closer (to the title) every day," Zidane told reporters.

"We have one game left but today was very important. We know what we need to do, we need to prepare well and recover from today as we gave so much."

The game had been due to take place in February but was rescheduled after the roof of the Balaidos stadium was damaged in a storm, provoking a dispute between the two sides.

The ill feeling increased when Celta were denied a penalty for a handball by Raphael Varane towards the end of the first half which saw Aspas booked for dissent.

The Galicians had knocked Real out of the King's Cup earlier in the year by drawing 2-2 at home and winning at the Santiago Bernabeu and also stunned Barcelona back in October by winning 4-3.

Eduardo Berizzo's side have gone off the boil in recent months and their season effectively ended last week with their Europa League semi-final elimination to Manchester United, although they still made Real work for the victory.

Real goalkeeper Keylor Navas was forced to punch clear a fizzing Daniel Wass free kick in the first half after which Aspas blasted into the side-netting, but Madrid controlled the game after the break once Ronaldo had increased their lead.

"The first half was end to end and that doesn't suit us, we were much better with the ball in the second and we played a little better," added Zidane.

"I don't feel like we're the champions yet, we still need to pick up more points and keep on with what we're doing."