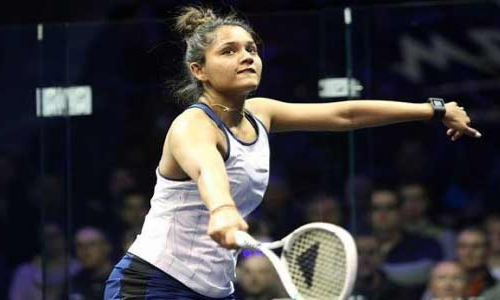 Jakarta: Indian squash players Dipika Pallikal Karthik and Joshna Chinappa had to be content with bronze medals in women's singles after losing to their respective opponents in the semifinals of the 18th Asian Games here today.

While Dipika lost to defending champion Nicol David of Malaysia in the first semifinal, Joshna was shown the door by Malaysian Sivasangari Subramaniam of Malaysia.

Dipika, who had won a bronze at the 2014 Asian Games in Incheon, said playing against former world number one Nicol, currently ranked ninth, was not easy.

Both the losing semifinalists win a bronze and there is no bronze-medal play-off.

Saurav Ghosal is the lone Indian squash player remaining in the fray and will take on Hong Kong China's Au Chun Ming in the men's singles semifinals later in the day.

"She is experienced and knows how to handle every situation, thrown at her. She was world number one for 10 years for a reason. I am happy I played well. It's unfortunate that I was in top-half to play with Nicol," she said.

The 26-year-old Dipika said she had to forget the defeat and get focused on the winning the gold in women's team event.

"We have a gold to achieve in team event. you can't think much about what has happened in the singles. It's hard to regroup and comeback but we have to do it. We don't want to celebrate as yet, we have a bigger target to achieve," she said.

The Indian women's team had won a silver in Incheon.

Asked if a few calls which went against her perturbed her, Dipika said, "We are used to it. It's part and parcel of the game. She has been playing Asian Games for a long time, she is very experienced. I think you have take positives out of it. I am only 26, I have few more Asian Games to go. Hopefully I welcome back strong."

Nicol is 35 years old and still going strong. Dipika said it's Nicol's time and she will have to wait for her time.

"Squash is about how fit you are, how much you enjoy the game. We can see she really enjoys the game. This is only my third Asian Games. Let the older one win here and we will comeback after four years and win."

The Indian squash players have trained without a regular coach for some time.

The SRFI had sent Cyrus Poncha and Bhuvneshwari Kumari as coaches with the contingent but Dipika said the players prefer helping each other.

"All of us like to be coached by the players. Only the player will talk to the players, it works like that for us. It's a silent decision taken by the players. Harry (Harinderpal Sandhu), Saurav (Ghosal), we are all training together