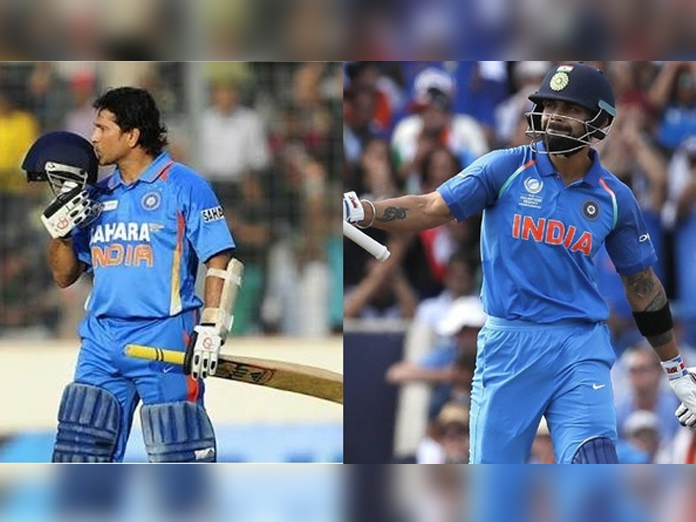 While Virat Kohlis historic success in Australia has been greeted with jubilation in India, it has also sparked a feverish debate is he even better than the nations cricket god Sachin Tendulkar

New Delhi: While Virat Kohli's historic success in Australia has been greeted with jubilation in India, it has also sparked a feverish debate: is he even better than the nation's cricket god Sachin Tendulkar?

Kohli, the world's top-ranked batsman in all three formats of the game, on Monday led India to their first-ever Test series win in Australia, after seven decades of trying.

Already known as "King Kohli" before the tour, there are those who say the Indian captain deserves promotion.

But his Test teammates Hardik Pandya and Lokesh Rahul were mercilessly trolled on Indian social media after saying on a TV chat show that Kohli was a better batsman than Tendulkar.

The pair were blasted for being "pathetic" and "cringeworthy" by Twitter users in a mass tirade.

While Tendulkar has maintained a God-like status in the Indian public's eye since his retirement in 2013, he never managed to guide India to a Test series win in Australia.

Kohli, 30, was born a year before Tendulkar made his India debut in 1989. He is the run machine of modern cricket with more 19,000 runs in Test, one-day and T20 games. He last year became the fastest to reach 10,000 runs in 50-over internationals -- beating Tendulkar's record.

Kohli's biographer Vijay Lokapally said there should not be a comparison betweenplayers of different generations, but hailed Kohli's achievements.

"As a captain he sets an example with his fitness, his batting and his leadership," Lokapally told AFP.

"His batting is absolutely top class. He doesn't need a certificate from anyone. And there is no better person to lead the Indian team in any format."

He added: "As far as comparisons go, I think it's unfair to disregard the efforts of former players like Vijay Hazare or Sunil Gavaskar and compare eras.

"Gavaskar was a star of his times, Tendulkar ruled his era and Kohli is the new generation star. So they are all champions in their own place."

Pandya and Rahul set off hostilities with Tendulkar fans in their off-the-cuff comments on Indian television aired Sunday.

Tendulkar had been named as the best batsmen by a string of luminaries including Don Bradman, Viv Richards and Sunil Gavaskar, one Twitter user noted in response. "Every true cricket fan knows who is best!"

Few doubt however that Kohli has given the world's number one Test nation an even stronger dominance by completing the 2-1 series win in Australia.

World Cup-winning Kohli rated the triumph his "best achievement" so far, and Indian papers hailed the captain for his "Thunder Down Under".

The Times of India newspaper headlined its report "The Reign Men", while the Hindustan Times said "This win will make India invincible", headlining the opinion of their columnist Ian Chappell.

"Congratulations to Virat Kohli and the Indian cricket team for the first ever win by a subcontinent team in a test series in Australia," the former cricketer wrote on his party's Twitter account.

India coach Ravi Shastri said Kohli's leadership skills had "made all the difference" but sought to shoot down all references to deities.

"This is not a team of gods and demigods, seniors or juniors. This is an Indian cricket team that will readily jump off a cliff to win a match for the nation.”