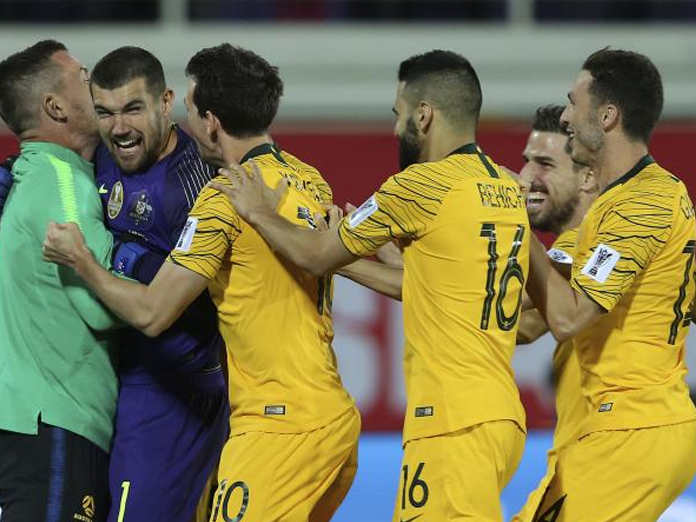 Japan advanced to the quarterfinals by beating Saudi Arabia 1-0, while defending champion Australia needed penalties to get past Uzbekistan.

Takehiro Tomiyasu scored for Japan with a header in the 20th minute and the Saudis created few chances despite having more than 75 percent of the possession against a defense-first Japan team.

"In our team, we share the same idea that even when our opponent keeps the ball, if we carefully defend at the end-line, we should be able to defend without any problem," defender Yuto Nagatomo said. "Our opponents held the ball for long periods, but our view was that we let them hold the ball."

Japan, which is looking to win a record fifth Asian Cup title, will next face Vietnam, the lowest ranked of the six teams to qualify so far for the quarterfinals.

Saudi Arabia has not reached the quarterfinals in 12 years. Coach Juan Antonio Pizzi's contract was due to expire after the tournament and he said it hadn't been renewed.

"No one has talked to me from the Saudi federation about that," the Argentine coach said. "We played most of the time today in their half and we controlled the ball and had position, but we lacked the final touch and determination to transfer the position into goals."

Official attendance figures put the crowd at just 6,832 as the Asian Cup continued to be notable for banks of empty seats and echoing chants.

Australia struggled to create chances as a drab game against Uzbekistan ended 0-0 after extra time, before winning the shootout 4-2.

On his return from a hamstring injury, Mathew Leckie scored the winning penalty.

Shooting second for Australia, Aziz Behich saw his penalty saved but goalkeeper Mathew Ryan - shifting from side to side on his line to distract Uzbekistan's penalty takers - stopped two Uzbek shots to put Australia ahead and allow Leckie to seal the win.

Australia is part-way through a rebuild under coach Graham Arnold after veteran players such as Mile Jedinak and Tim Cahill retired from international football following last year's World Cup. Since joining the Asian confederation in 2006, Australia has played eight games in the knockout stages, with five of those going to extra time.

Australia's quarterfinal opposition will be the United Arab Emirates after the host side beat Kyrgyzstan 3-2 after extra time.

Kyrgyzstan missed a string of chances at 2-1 down in the second half before Tursunali Rustamov's stoppage-time header sent the game to extra time. The UAE took the win after Ahmed Khalil's penalty, awarded for a shove on a teammate, but narrowly avoided penalties only when Kyrgyzstan hit the crossbar with 10 seconds remaining.

The UAE is aiming to live up to its third-place result from 2015, and reached the final the last time it hosted the tournament in 1996.