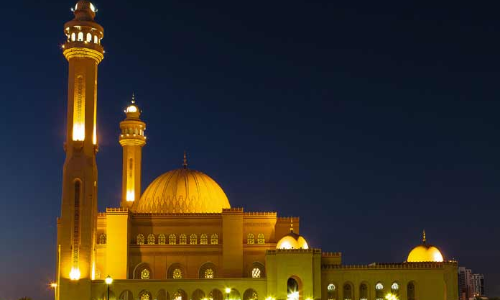 What do you do if you have three days in Bahrain, a beautiful country in the Arabian Gulf We found out during our recent visit as we moved at a hectic pace from one attraction to another The tiny country does pack quite a punch we realised to our delight

What do you do if you have three days in Bahrain, a beautiful country in the Arabian Gulf? We found out during our recent visit as we moved at a hectic pace from one attraction to another. The tiny country does pack quite a punch we realised to our delight.

We started off with a visit to the immaculately maintained, Al Fateh Grand Mosque. It can accommodate 7,000 worshippers and is Bahrain's largest mosque. It was built on reclaimed land in the 1980s. At many times in our visit, the guides pointed out areas and told that they were built on reclaimed land. For that matter, this is a phenomenon one frequently encounters in the Gulf region. The mosque has an Indian connection—the teak is from India while the marble is from Italy, and glass from Austria. After the tour, an articulate guide sat us down and explained the customs and traditions related to Islamic culture, especially worship.

At the Bahrain International Circuit (BIC), we took a ride in a 4x4 over a specially designed 3.5 km track on tough terrain with 33 obstacles. The expert drivers—specially trained in this terrain—made it seem so easy! We held on for dear life and even closed our eyes at some point even as we heard shrieks of delight from friends in the other cars. The BIC is a major centre for motorsports in the Middle East and a big draw for locals and visitors alike. The guide told us they regard it as one of the most technologically advanced race-tracks in the world. Thrill seekers can also check out the indoor skydiving facilities as well as the go-karting at other adventure centres in the country.

Equally enjoyable though in a much more sedate way was the King Fahd Causeway, Bahrain. This is the bridge, which connects Bahrain and Saudi Arabia—actually a complex of bridges and artificial islands. Around 20 million travel across the causeway from both countries, annually! The Bahrain side offers stunning sights of the sea and landscaped surroundings. It has a tower with a lookout platform for panoramic views and draws tens of thousands of tourists annually. The amazing views; the clean air (sheer heaven especially for our Delhi-based travel companions) and delightfully strong sea breezes—so powerful they almost blew our scarves and caps away—made it one of the highlights of our visit. It can get very windy especially during early mornings, we were told.

For knowledge about the history of Bahrain and in fact much of the Arabian Gulf region, we went to visit the Bahrain Museum. The Bahrain National Museum is one of the newest and biggest museums in the Middle East. The sprawling and impeccably maintained museum has nine major galleries and covers around 5,000 years of the country's history. The architecturally stunning National Theatre of Bahrain is next-door, and both these structures constitute two of the biggest landmarks in Manama, the capital of Bahrain. The outdoor sculpture of the pearl diver is a favourite with visitors seeking photo-ops, our group included. Bahrain has a long history of pearl-diving and for 2,000 years, Bahraini pearls were prized as the finest natural ones in the world.

A short drive from central Manama and you will come upon Bahrain's big bill attraction—UNESCO World Heritage-listed Bahrain Fort or Qal'at al-Bahrain. It is best visited during late evening or night when the floodlights highlight the contours of the area and give the whole place an ethereal glow. A good idea would be to book a ticket to the sound and light show, which takes you the fort's history. The fort was built by the Portuguese in the 16th century as part of a line of defences along the Gulf. However, the site itself is richly historic—it was occupied from about 2,300 BC. The fort is actually a tell – an artificial mound created by several successive layers of human occupation. This site was the capital of the Dilmun, one of the most important ancient civilisations of the region. A museum adjoins the fort where you find centuries-old exhibits discovered in and around the fort area.

We drove out of town to the approximately four-century-old Tree of Life. It is considered a marvel—because it survives and thrives despite being located in a barren desert area and has done so for hundreds of years with no known source of water nearby. Some say that a mysterious underground spring nourishes the tree and hence locals look upon the tree as some sort of miracle! Some even suggest that it is actually the last vestige of the fabled Garden of Eden. We climbed a small mound to reach the very leafy tree with spreading branches which were providing photo-ops for a clutch of tourists.

If you are longing for a bit of nature in the desert area, you can visit the Azizia Bird Kingdom a specially created ecosystem that houses over 70 species of birds from around the world including critically endangered ones. It is not only fun but educational too especially for children.

Art lovers can check out the Art District aka Block 338, which houses both contemporary art exhibitions as well as traditional art and craft. Clean streets and sidewalks, friendly locals and the refreshingly clean, unpolluted air made walking around this area, in fact, all of Bahrain a pleasure. The Al Jasra Handicraft Centre is on the itinerary of every tourist and understandably so, given its row of showrooms where one can see artisans at work as well as purchase locally handcrafted products.

There are plenty of beaches to explore and all mercifully very clean and with very few people around. Watersports are offered at several places including private beaches for which you have to purchase an entry ticket. The biggest attraction in this place, of course, is the Disappearing Island of Jarada, which is visible only during low tide and disappears every night. It is also a favourite picnic spot.

The Arabian Gulf is known for its fabulous souqs aka souks or marketplaces. They are treasure-troves of handicrafts not just from Bahrain but around the region and electronic goods and perfumes are also widely sold here. As for the legendary gold souks, they are always full of buyers and window-shoppers. There is enough excitement for foodies too with a plethora of restaurants which showcase ethnic cuisine as well as international menus—and yes, Indian food is available everywhere too considering the large number of Indians who have found jobs at various levels here.

Indeed, Bahrain does live up to the cliché — a country which has something for everyone. And the best part is that it is among the most liberal of the countries in this region, so visitors from around the world, as well as the expatriates, are made to feel pretty much at home anywhere in the country.