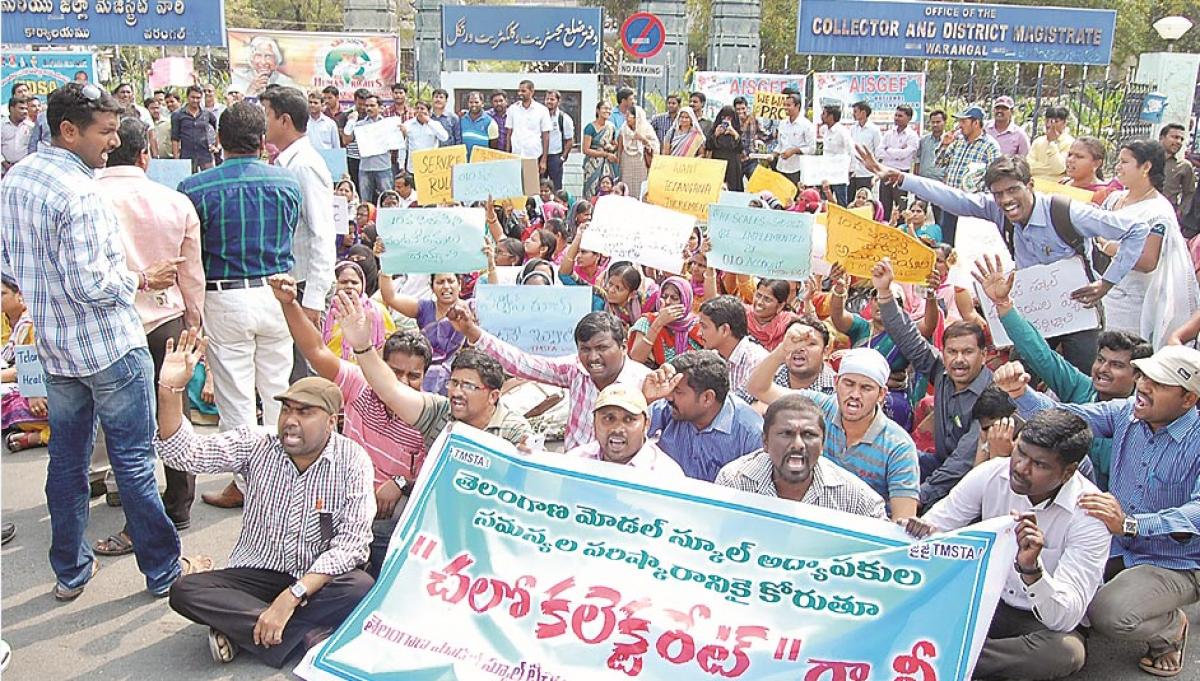 The protesting teachers conducted a meeting at Public Gardens, later took out a protest rally from Ambedkar statue to the district Collectorate in Hanamkonda. A delegation of the associations met Joint Collector Prashanth J Patil and submitted memorandum. Speaking to the media, the TMSTA state vice-president Jani Naik, its district president D Rajender, leaders D Srikanth, V Kiran Kumar, K Mahender and others wanted immediate measures by the State government to address their demands.

They demanded implementation of recommendations of 10th Pay Revision Commission, interim relief, dearness allowance, health cards to all the teachers and to resolve issues related to service rules. Despite repeated appeals, the government was not responding properly, they alleged. Further, the model school project was delinked from the Central assistance.

The State government though promised to continue the project and merge it with Education department was yet to take a concrete action in that direction, they added. Service protection to in-service teachers, enhancement of principals’ pay scale on par with the principals of government junior colleges and post graduate teachers (PGTs) pay scale on par with junior lecturers were also among their demands.

Sufficient staff was not present in most of the schools and it was leading to heavy workload on the teachers. There were 182 Model Schools at present in Telangana. The State government could make use of the existing schools for its flagship ‘Free KG to PG’ education programme, they suggested.

In Warangal district alone, there were 30 models schools with strength of about 15,000 students and 550 teachers working. The teachers were on mass leave since Saturday and it affected functioning of the schools and the teachers vow to intensify their agitation. The principals who were not part of the ongoing agitation were also planning to join the agitation. The protest by the teachers was causing worry among the students and parents as the SSC examinations were nearing.