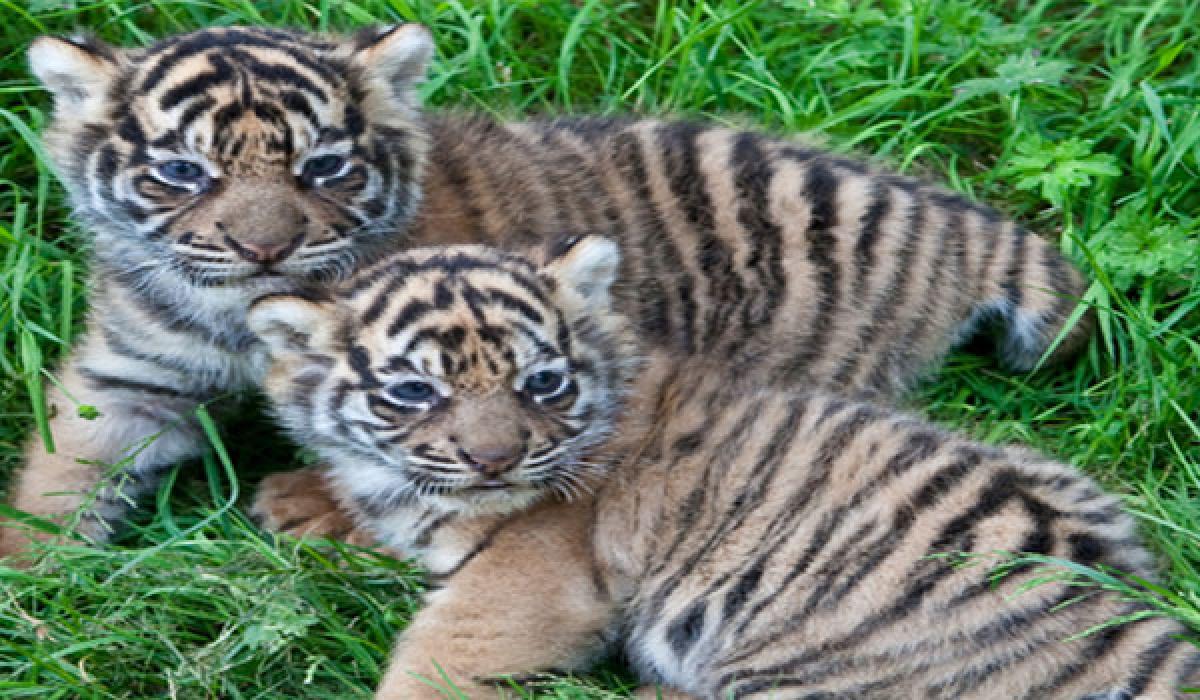 Giving a new hope for rejuvenation of Tiger population in the Tiger Reserve forest of Nagarkurnool district, the forest officials while conducting a monitoring survey have sighted two tiger cubs roaming near Vatavarlapally village under Amrabad reserve forest area on Friday.

Nagarkurnool: Giving a new hope for rejuvenation of Tiger population in the Tiger Reserve forest of Nagarkurnool district, the forest officials while conducting a monitoring survey have sighted two tiger cubs roaming near Vatavarlapally village under Amrabad reserve forest area on Friday. According to M.C. Pargaien, Field Director of Amarabad Tiger Reserve, this is the first time that they have ever spotted tiger cubs roaming in the forest after a gap of 15 years. “As part of fourth phase of monitoring survey, we have been monitoring the forest area to record survival of forest animals.

Fortunately, on Friday at 10.43 am, our survey team has sighted two tiger cubs, near Vatavarlapally village under Amrabad reserve forest. This is clearly a positive indication with which we can assess that the tiger population in the area is on the rise. This is possible only because of our continuous efforts to conserve the forest and to improve the forest habitation that helps the wild animals to develop their breeding grounds.

With the spotting of tiger cubs, our responsibility has further increased and we are now planning to install trap cameras at all import points in the forest to capture their movement and doing all that we can to safe guard their habitat and restricting the human movement in the forest,” informed M.C Pargaien.When asked about the number of tigers in the forest, the field director said that among the 50 Tiger reserves in the country, the Nallamalla Tiger Reserve forest is the largest in the country and both the Central and State governments are taking all steps to help improve forest habitation increase the tiger population.

“As we all know, tiger population across the world is fast declining mainly because of increased poaching and human intervention of forest habitation which is destroying the breeding grounds of wild animals. Earlier before bifurcation of Telangana, the entire Nallamalla forest region was under one single Tiger reserve and it was estimated about 37 to 40 tigers in the entire forest area spanning over 6,000 square kilometres in the both states of Andhra Pradesh and Telangana. However, after bifurcation, this tiger reserve forest has been divided among the two Sstates.

As per preliminary data available after June 2 2014, it is estimated that about 16-17 tigers are living under Mannanur and Amrabad Tiger reserve forest of Telangana state, while the remaining have moved into Nagarjunasagar Tiger reserve forest under Andhra Pradesh state,” said the FD. At present the forest conservators are conducting the Phase IV monitoring survey to identify the tiger population.

For this experts from Hyticos NGO are engaged along with the forest staff. As part of their continuous forest conservation steps, the forest officials are regularly providing water and protecting the habitat by taking up tree plantation under Harithahaaram programme and installing trap cameras to capture the movement of the animals. “As per the guidelines of National Tiger Conservation Authority (NTCA), we are conducting the forest monitoring survey. As part of this survey we have identified about 150 important spots in the forest area and have decided to install trap cameras.

Apart from this we are also carrying out the pug mark survey. We will take all these data and send it to New Delhi. By combining both these data we will soon be able to tell the exact number of tigers in the forest,” explained the FD.According to the official, what all the data that is available with them is only estimates, however they are still in the process of getting the exact data by means of various procedures and methods. This time they have adopted the advance technology of installing trap cameras and by next two to three months they will be able to give our the exact number of tigers in the reserve forest.