After 96mm of rain, Hyd limps back to normally 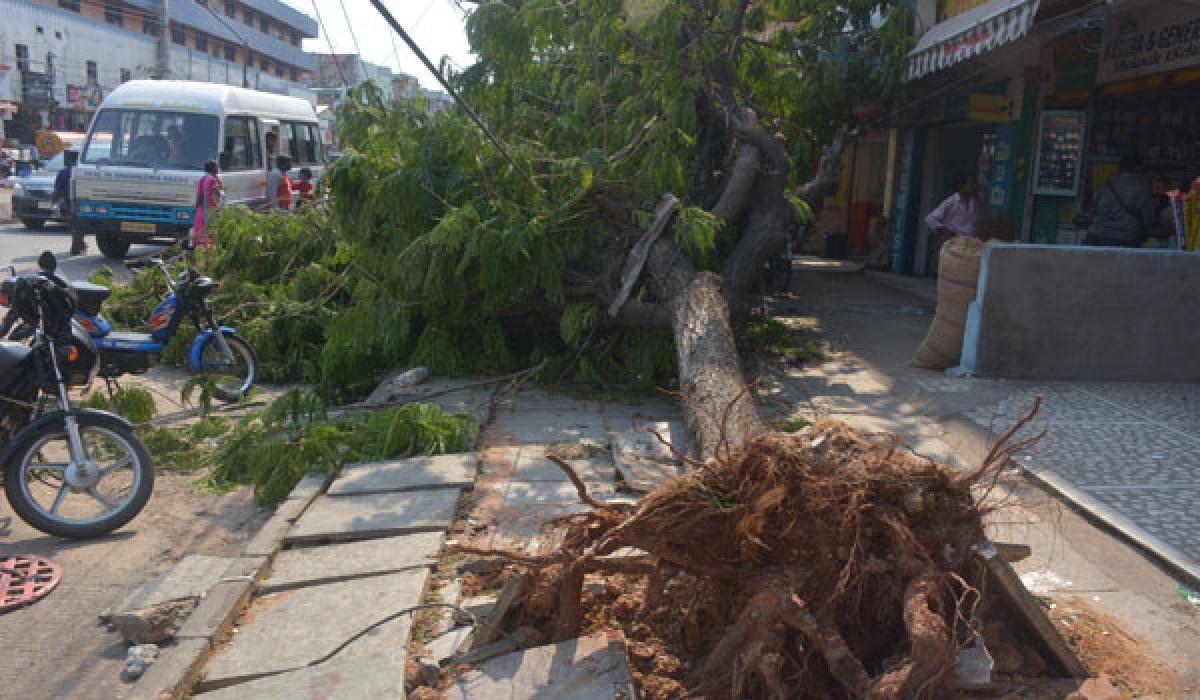 The Greater Hyderabad Municipal Corporation, Electricity department, Police and Hyderabad Metropolitan Water Supply and Sewerage Board (HMWS&SB) have worked in tandem to restore the city within few hours after the major devastation caused due to unseasonal rainfall in the late hours of Tuesday.

Hyderabad: The Greater Hyderabad Municipal Corporation, Electricity department, Police and Hyderabad Metropolitan Water Supply and Sewerage Board (HMWS&SB) have worked in tandem to restore the city within few hours after the major devastation caused due to unseasonal rainfall in the late hours of Tuesday. The city has received 96mm rainfall, which had uprooted 290 trees, water stagnation in 56 points and damaged as many as 32 electric poles in the GHMC limits. Hundreds of localities in Greater Hyderabad went without power for over 16 hours due to rain and strong winds; with Begumpet, Tarnaka, SR Nagar, and Rajendernagar experiencing power disruption for more than 24 hours.

GHMC Commissioner B Janardhan Reddy told The Hans India that the departmental convergence has helped to restore the city in hours after the heavy rains. He said that the building demolishing teams and horticulture departments have helped the civic body in the rescue operations. Janardhan Reddy said that India Meteorological Department (IMD) predicted hailstorms in next two days. He cautioned the people to be vigilant during the two days. He said that the GHMC would deploy volunteers in all slums and wards for help as part of disaster management.

Water Board Managing Director M Dana Kishore said that they have pumped the stagnated water into storm water drains and restored several pumping stations which were damaged due to tree fall. Appreciating the efforts of electricity department staff, he said that the city would receive normal water supply from Thursday.

Additional Commissioner of Police (traffic) Jitender said that cops have ensured the free traffic flow. With the efforts of policemen, less traffic congestions were reported in the early hours. Meanwhile, the upscale areas of Banjara Hills, Jubilee Hills, Madhapur, Punjagutta, Ameerpet, Yousufguda, Khairatabad, Begumpet and Secunderabad, were marooned. Trees and electric poles were uprooted at several places. Power supply was stopped in several areas for hours. As a precautionary measure, electrical lines were deactivated in many places.

There were reports of vehicles getting stranded on roads for hours together. On Raj Bhavan road, a truck overturned causing injuries to one person. There were no reports of any other casualties from any parts of the city.An electric pole collapsed on the Taj Krishna road at Erramanzil, electric wires snapped at GTS Colony near TS Genco Office, and several trees fell on major roads. In the old city, heavy rain resulted in disruption of power in Saidabad, Madannapet , Yakutpura areas.