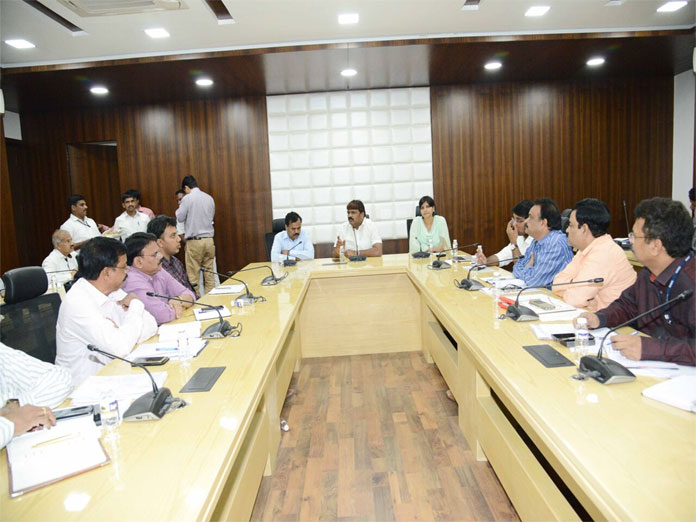 Hyderabad: City Mayor Bonthu Rammohan on Thursday urged GHMC authorities to conduct a meeting of higher officials led by Chief Secretary for resolution of issues related to various projects initiated by GHMC. Speaking at a review meeting with higher officials of GHMC, which was organized after a long interval due to assembly elections, he indicated that the CM KCR may call for a review meeting with GHMC officials very shortly. He urged the officials to take necessary permissions for pending projects well before the review meeting. He advised them to take necessary measures to bring discipline among citizens towards cleanliness, not just for the sake of improving Swachh Survekshan ranking but to improve their voluntary participation.

GHMC Commissioner Dana Kishore, officials of various departments, zonal commissioners, chief engineers and others attended the meeting. Stressing on the need to instill discipline among citizens to keep the city clean and green, the Mayor asked the senior officials to implement Swachh programmes more stringently and impose heavy fines if warranted. He advised commissioners to form an internal committee to formulate a policy on imposition of fines. He urged them to prepare a special action plan to make Hyderabad city a model city with regards to cleanliness for other states.

Mayor asked authorities to prepare a plan to add 2,000 more swachh autos to the existing 2,500 autos, to meet the needs of new colonies and slums. He ordered them to take necessary measures to ensure that all the private vehicles which carry building demolition and construction debris register with GHMC. He ordered officials to take stringent action against those who dump waste, construction materials and debris on roads, nalas and water bodies. He urged the officials of Ramky to take up works of modernization of transfer stations which are located within the GHMC limits. The unaddressed issues of SFAs such as their transfers need to be addressed at the earliest, he said. Among those who attended the meeting were Additional Commissioners Harichandana, Advaithkumar Singh, Musharaf Ali, Sandeep Jha, Kennedy, Ravi Kiran and Vijay Lakshmi, Zonal Commissioners Raghuprasad and Srinivas Reddy, CEs Ziauddin and Suresh, and CCP Devender Reddy.