Taking art to the people 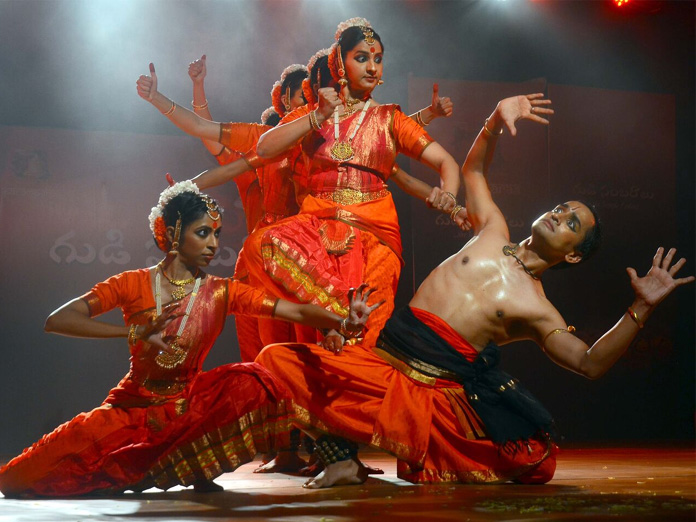 The iconic Kanaka Durga temple perched on the Indrakeeladri in Vijayawada, always busy with devotees had come alive with music and dance when Vaibhav Arekar and team gave a Bharatanatyam recital and Bijayini Satpati performed Odissi. A week later Deepika Reddy, Kuchipudi Guru, dancer performed the resplendent ballet ‘Telangana Vaibhavam’ where her portrayal of ‘Rudrama’ enthralled the audience at the historic Thousand Pillar.

The fifth edition of the annual festival GudiSambaralu founded by Shashikala and Dr Srinagi, GudiSambaralu is a cultural initiative where reputed dancers and musicians from across India come down to AP and Telangana and perform in the notable and heritage-rich temples, popular ones, and also, old and forgotten ones.

The events in addition to bringing life to old temples and adding an artistic touch to the temples that had always been the centres for art, also bring the opportunity of watching some of the best artists of India to the common folk. “The well-organised events so far have been free for all. And we intend to keep it this way. The main aim of GudiSambaralu is to take the rich cultural treasure of our country to all classes of people,” shares Dr Srinagi, who is a physician and CEO at Medwin Hospitals, before retiring and spending most of her time in spiritual and artistic pursuit.

Shashikala, a Hyderabadi, who is into social work, runs Roshni Counselling Centre and is a regular at dance and music festivals across India was hoping to conceptualise something on the lines of temple dance that she saw in Bengaluru. She found a partner equally passionate and driven about art in Dr Srinagi, who is also an old acquaintance. Together, they formed ‘Parampara’ that heralded the annual festival that from the first edition itself began to conceptualise temples spread far and wide across the Telugu land as venues for amazing dance, music and theatre events.

“I am a big temple visitor and went to almost all temples in India and Shashi is cultural oriented and attends most of the cultural events conducted in Hyderabad. When she mentioned the temple dance that she watched and how we must have a similar event in our State. We decided to take it up and it somehow worked out very well. It looks like there is divine grace on us,” shares Dr Srinagi.

The first time had been the most challenging, as both, neither had the experience nor the money to get going. However, as the duo went ahead scouting for temples and the artists everything fell in place. Going forward, government officials, collectors, MLAs began appreciating the effort and they had all the support they needed, that made them spread their wings.

We have had events across; in Banswada, Mahboobabad, Nellore, Bapatla, Nizamabad. In fact, when we conduct events at the not so well-known ones like Sreeramachandra Swamy temple in Ammapalle, Shamshabad, we have had around 2000 people in the audience.

People who visited were amazed at how such a beautiful temple that also has an amazing stepwell can be in oblivion. The offshoot of the Parampara events was that they brought more visitors to the temple, and the poojaris there are very happy as they now get their salaries on time.

This year we are doing a music event by Kartik Iyer from Chennai at a lesser known Veerabhadra Swamy temple in Machirevula, Medchal, on ORR, Hyderabad and another event at Miyapur’s Dharmapuri Kshetram,” shares Shashikala. “It is not just dance and music; as a part of GudiSambaralu, theatre events too are held at the temples. “When we asked Surabhi theatre group to present their popular plays, ‘Patalabhairavi’ and ‘Mayabazar’ in Gadwal, it was a huge success,” relates Dr Srinagi.

It is not every day that eminent dancers come all the way to perform in remote places. GudiSambaralu has managed to do just that.GudiSambaralu are not restricted to the people who are already culturally aware, who go where ever such programmes are happening. They are connoisseurs. Our goal was to reach out to the rest, who are not aware or sensitised to such programmes. Our roots and culture keep us motivated and confident to deal with our life.

Our goal has been to sensitise our younger generation and bring them back into the fold of our culture. This year, the famous Sankhya Dance Academy performed at Bhavanarayana temple in Bapatla. Today, January 19, Dr Mallika Sarabhai will be performing at the Ammapalle, Sree Ramachandraswamy temple in the evening.