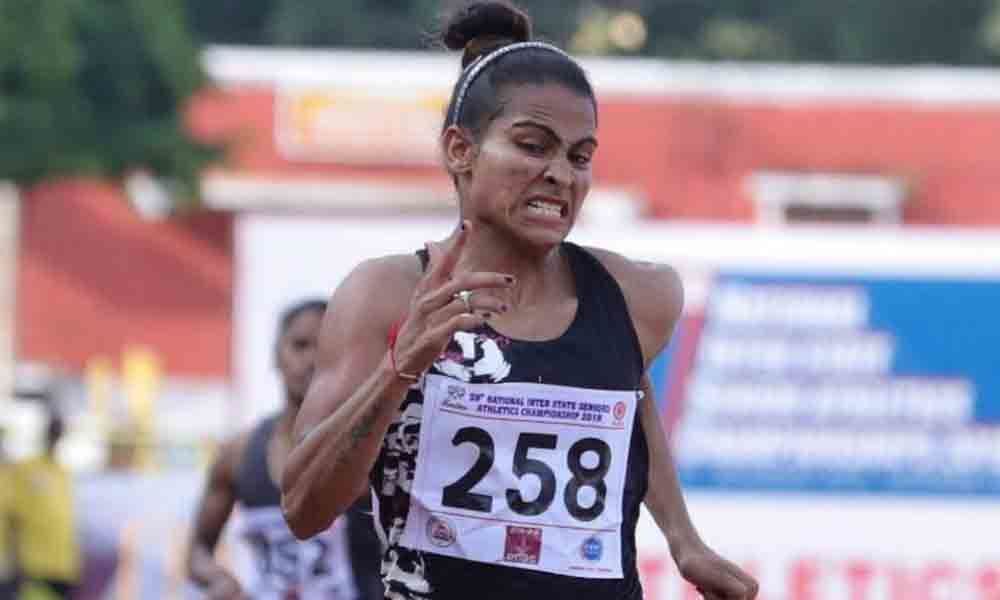 Haryana’s Anjali Devi made a stunning return to competitive race after an injury lay-off as she won the women’s 400m gold in the 59th National Inter-State Athletics Championships here on Thursday.

Lucknow (PTI): Haryana's Anjali Devi made a stunning return to competitive race after an injury lay-off as she won the women's 400m gold in the 59th National Inter-State Athletics Championships here on Thursday.

Anjali clocked a personal best of 51.53 seconds to beat Saritaben Gayakwad (52.96) of Gujarat and Jisna Mathew (53.08) of Kerala by a distance at the PAC Stadium.

The World Championships qualifying standard for women's 400m is 51.80 seconds and Anjali is the lone Indian to have crossed the mark so far.

Reigning world junior champion Hima Das, who has won six gold medals in Europe recently in mediocre fields, is yet to qualify for the World Championships in her pet event of 400m. The qualifying period is till the midnight of September 6.

Anjali had been part of the Indian team that had Spala (Poland) as its training base but returned home to get her ankle attended to. "Having not run since the Federation Cup (in March), I knew I would have to give my best in the final," Anjali said after winning the gold.

"I am grateful to all those who stood by me when I was getting my ankle treated. The national coaches have been in touch with me and I have trained under coach Rohtas Siwach at home before coming here."

Marathon specialist Gopi Thonakal (Kerala) won the gruelling 10,000m race in 30:52.75, outsprinting Arjun Kumar (Uttar Pradesh) and Vikram Bangriya (Goa). Easily the oldest of the 25 men who took the starter's orders, Gopi's victory is creditable considering that as many as 13 runners, including Maharashtra's Murli Kumar Gavit and Kisan Tadvi, dropped out.

With L Suriya opting not to run the women's 10,000m race and with 5,000m winner Parul Chaudhary (Uttar Pradesh) not entering the event, Phoolan Pal ensured that the distance gold medals would remain with the home state. Phoolan Pal and Karnataka's Kavita Yadav were engaged in a gritty duel but the Uttar Pradesh runner turned in a good kick in the end.

There was a keen battle at the high jump pit with Sarvesh Kushare (Maharashtra), Geo Jose (Kerala) and B Chethan (Karnataka) finishing within 4cm of one another.

World University Games champion Dutee Chand's presence on the track aroused excitement during the 100m semifinals. She clocked 11.34 seconds and will need to be faster in the final on Friday to breach the 11.24 second mark that will grant her automatic qualification for the World Championships in Doha later this month. Archana Suseendran (Tamil Nadu) won the other semifinal heat in 11.49.

In the men's 100m semifinals, 19-year-old Nuzrat of Haryana clocked the fastest time of 10.51 seconds.