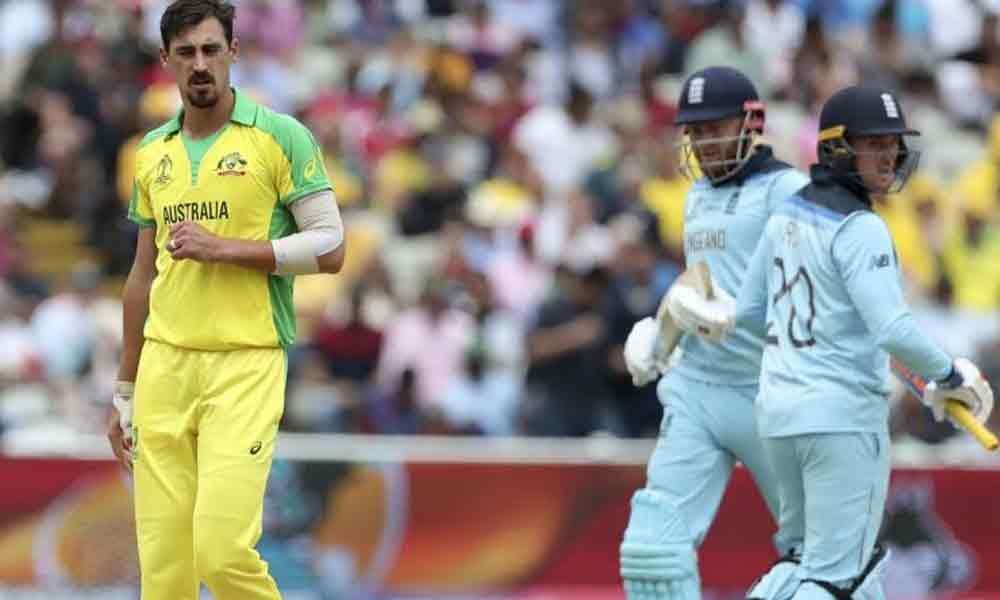 After overpowering the defending champions, England will now face New Zealand in the final of the 2019 World Cup at Lord's on July 14.

Birmingham: England registered a massive eight-wicket victory over Australia in the second semi-final of the ICC Men's Cricket World Cup at Edgbaston here on Thursday and have reached in the final for the first time in 27 years.

After overpowering the defending champions, England will now face New Zealand in the final of the 2019 World Cup at Lord's on July 14.

Chasing a modest target of 224, England had a brilliant start as both the openers, Jonny Bairstow and Jason Roy, started playing aggressively and formed a 124-run partnership for the opening wicket.

However, in the 18th over, Mitchell Starc provided his side with the much-needed breakthrough as Bairstow (34) was given LBW. Joe Root then came out to bat and hammered three boundaries to Starc in the same over.

Roy got out in the 20th over after playing a knock of 85 runs off just 65 balls as he was caught behind off Pat Cummins delivery. Skipper Eoin Morgan was the next batsman and batted impeccably along with Roy.

Morgan scored unbeaten 45 while Root played an unbeaten knock of 49 runs and took their side over the line to secure their spot in the tournament's final.

Earlier, Australia got off to a horrendous start after electing to bat first. The Down Under side lost its openers Aaron Finch and David Warner inside three overs, leaving Australia at 10/2.

England fast bowler Jofra Archer got the breakthrough as Finch got leg-before for a duck. Pacer Chris Woakes added to the misery as he dismissed Warner (9), who was caught by Jonny Bairstow at second slip. Woakes returned and bowled Peter Handscomb (4), reducing Australia to 14/3.

Smith and Alex Carey rebuild the innings, adding 103 runs for the fourth wicket. On the last ball of the eighth over, Archer struck Carey with the short ball. The helmet came off as Carey looked away and duck but his chin area started bleeding and received immediate medical treatment.

England again put Australia under pressure as legspinner Adil Rashid sent Carey back to the pavilion in the 30th over. Carey, who was four shy fifty, gave a catch to substitute fielder James Vince. In the same over, Marcus Stoinis got leg-before for a two-ball duck, leaving Australia at 118/5.

For a brief period of time, Smith found support in Glenn Maxwell as the duo stitched 39 runs. However, Archer again injected tense vibes in the Australian dressing room as he dismissed Maxwell (22). Rashid joined the party as he got rid of Pat Cummins (6).

Smith and Mitchell Starc took Australia past the 200-run mark with their 51-run partnership. Soon after, in the 48th over, wicket-keeper Jos Buttler broke the Australian backbone as he run out Smith for a well-compiled 85. In the same over, Starc followed Smith back to the pavilion as Woakes got Starc (29) caught behind.

On the final ball of the penultimate over, Mark Wood got his first wicket in his 50th ODI as he bowled Jason Behrendorff (1). Australia folded on 223. For England, Woakes was the pick of bowlers as he returned with three wickets in his eight overs and conceded just 20 runs.