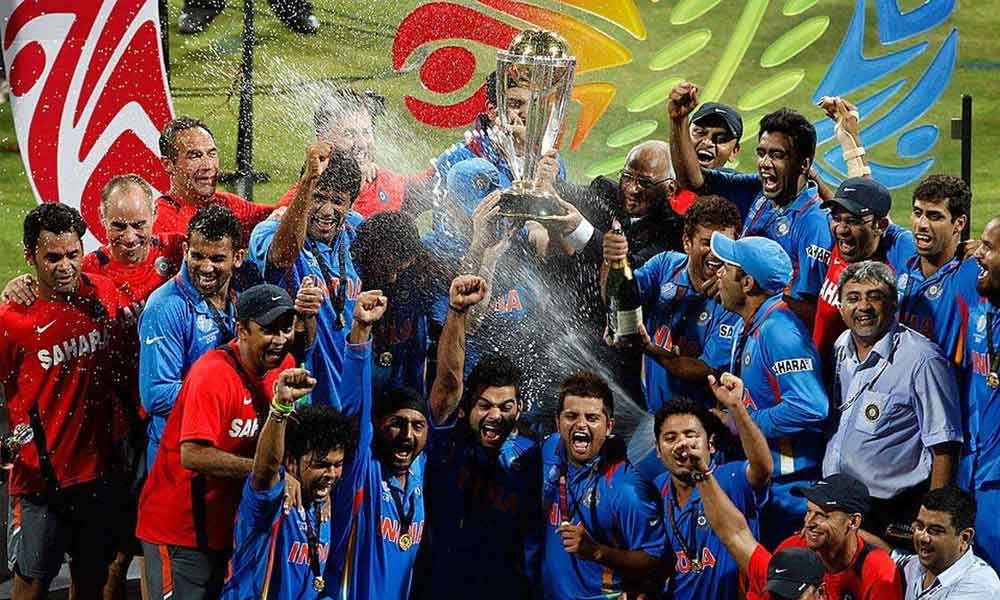 New Delhi: On this day 10 years ago, India lifted their second World Cup title, defeating Sri Lanka by six wickets in the final. 10 years have passe...

New Delhi: On this day 10 years ago, India lifted their second World Cup title, defeating Sri Lanka by six wickets in the final.

10 years have passed, and the memory of India lifting the World Cup title in 2011 still feels fresh as morning. Powered by the knocks of Gautam Gambhir (97) and MS Dhoni (91*), India defeated Sri Lanka by six wickets to lift their second World Cup trophy on this day.

Dhoni, the Indian captain in the tournament, finished the final with a towering six over the long-off against Nuwan Kulasekara, sending the entire nation into a frenzy.

Also, this was Dhoni's second ICC title as captain after having clinched the inaugural World Twenty20 in South Africa in 2007. In 2013, he would go on to complete the trinity, adding the Champions Trophy title to his trophy cabinet.

Chasing 275 to win, the men in blue held their nerves in the tense final to register a six-wicket win against Sri Lanka at the iconic Wankhede stadium in Mumbai. Opener Gautam Gambhir top-scored for the hosts with a special knock off 97, while, Dhoni played a memorable hand with his unbeaten 91.

Earlier, riding on Mahela Jayawardene's magnificent hundred Sri Lanka managed to put up a competitive score of 274/7 in 50 overs. The visitors put themselves in great position after dismissing Sehwag and Tendulkar cheaply.

However, it was Gambhir who steadied the ship for India with an 83-run stand with Virat Kohli before the latter was dismissed for 34.

After Kohli's dismissal, Dhoni promoted himself up the order ahead of in-form Yuvraj Singh and it proved to be a masterstroke.

Both Gambhir and Dhoni then stitched a brilliant 109-run stand for the fourth wicket. During the chase, the Indian skipper also notched up his first World Cup fifty but Gambhir missed a memorable ton by just three runs as he was bowled by Thisara Perera for 97. However, Dhoni kept his calm and anchored India's chase with supreme ease.

The World Cup victory had added significance due to the presence of 'Master Blaster' Sachin Tendulkar in the squad. Tendulkar had represented India in five World Cups prior to the 2011 edition, but the coveted trophy remained missing in Tendulkar's enviable cabinet.

The wait eventually ended in 2011, which also turned out to be Tendulkar's final World Cup for India.

India had won the first World Cup in 1983 under the captaincy of Kapil Dev. While the victory in 1983 put India on the cricket map, the win 28 years later laid the foundation of India's dominance in the sport.

Since the 2011 edition, 10 players who were part of India's squad have retired, including captain MS Dhoni. From the team, only Virat Kohli, Ravichandran Ashwin, Harbhajan Singh, Sreesanth and Piyush Chawla are active in the sport.