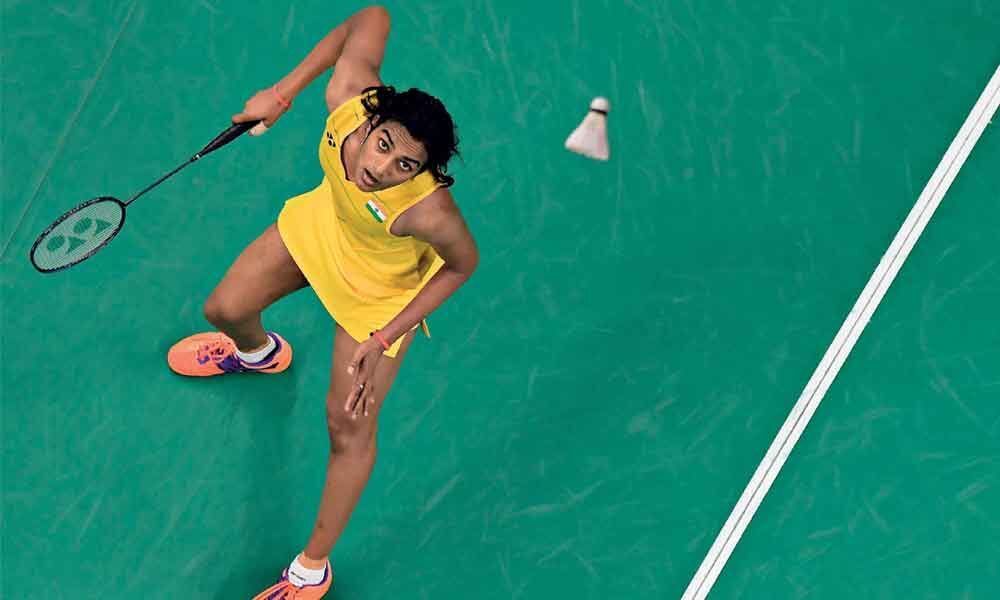 India’s double silver medallist P V Sindhu will look to produce another masterclass when she resumes her quest for an elusive gold at the BWF World Championships beginning here on Monday.

Basel (Switzerland) : India's double silver medallist P V Sindhu will look to produce another masterclass when she resumes her quest for an elusive gold at the BWF World Championships beginning here on Monday.

Sindhu has been the most consistent performer in the World Championships in the last few years with two back-to-back silver and as many bronze medals but a gold medal has so far eluded her.

The 24-year-old Indian ace has always managed to find her best form in the World Championships, producing steller performances but she missed the trick in the summit clash twice.

While she lost to Nozomi Okuhara of Japan in an epic battle, lasting 110 minutes in the 2017 edition, Olympic champion Carolina Marin of Spain stopped her in the summit clash in 2018.

Sindhu, who is seeded fifth, is coming into the prestigious event with a runner-up finish at the Indonesia Open last month and has been working on her fitness and defence in her pursuit to outlast her opponents.

She received a bye in the first round and will open her campaign against either Chinese Taipei's Pai Yu Po or Bulgaria's Linda Zetchiri.

"I've been working on my defence, physical fitness and also on-court skills. I have trained hard and I hope I can do well. I have to perform well but there is no pressure," Sindhu told PTI.

If she wins her first match, Sindhu is likely to meet Beiwen Zhang of USA in the third round and is expected to face Chinese Taipei's Tai Tzu Ying in the quarterfinals.

If everything falls into place, then Sindhu may collide with compatriot Saina Nehwal in the semifinals, provided the former world number 1 too crosses the initial rounds.

Eighth-seeded Saina, who boasts of a silver and bronze medal in the World Championships, will take on the winner of the match between Switzerland's Sabrina Jaquet and Netherland's Soraya De Visch Eijbergen in the second round after getting a bye. She is likely to face Mia Blichfeldt of Denmark next.

Saina's likely opponents in the quarterfinals will be China's Chen Yu Fei, who had clinched the All England Championship earlier in the year.

In the men's singles, former world number 1 Kidambi Srikanth, who had reached the India Open finals in March, will look to put up a good show after recovering from a knee problem which he suffered ahead of the Sudirman Cup.

The seventh seeded Indian, who has gone without a title in the BWF World Tour for the last 22 months, will open against Nhat Nguyen of Ireland in a repeat of the opening clash of the 2018 edition.

Sameer Verma, who also was bothered by a shoulder issue, is in the same half as Srikanth and will open against Loh kean Yew of Singapore. The 10th seeded Madhya Pradesh shuttler will face a tough challenge against second seed Chou Tien Chen of Chinese Taipei in the prequarterfinals if he clears the earlier rounds.

In the doubles, the men's pair of Satwiksairaj Rankireddy and Chirag Shetty, who clinched their maiden BWF Super 500 title at the Thailand Open, have pulled out of the competition due to injuries.

The Indian pairs of Manu Attri and B Sumeeth reddy, MR Arjun and Ramchandran Shlok and Arun George and Sanyam Shukla will also be in the fray.

In the women's doubles, Ashwini Ponnappa and N Sikki Reddy, Jakkampudi Meghana and Poorvisha S Ram and Pooja Dandu and Sanjana Santosh will also look for a good outing.

The mixed doubles pair of Pranaav Jerry Chopra and Sikki too will look to go deep in the tournament when they begin against the English pair of Ben Lane and Jessica Pugh.