Nagal takes a set from ­great Federer before exiting 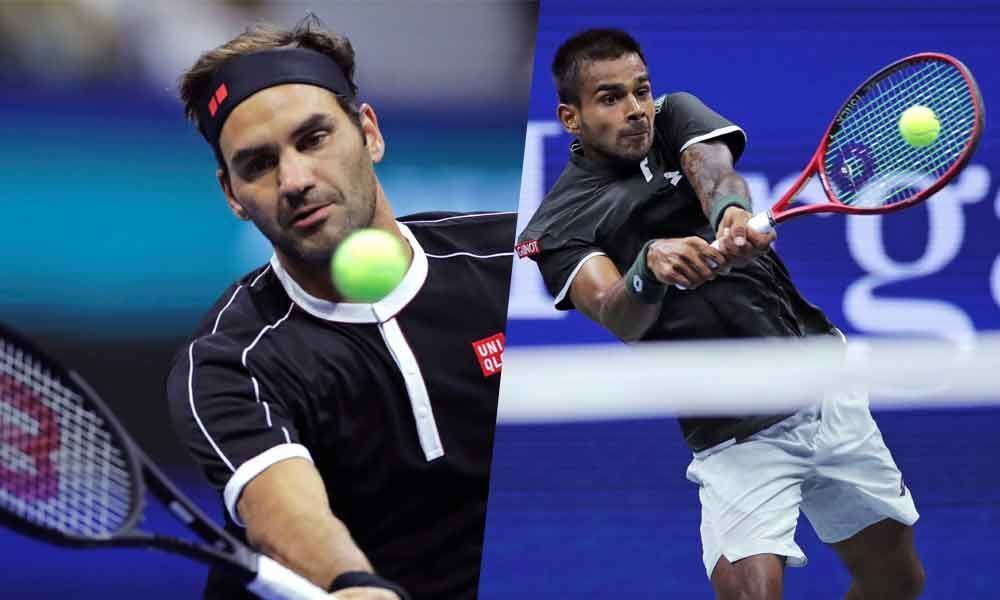 The improbable did not happen but India's Sumit Nagal exited the US Open fighting, stretching and even earning the respect of his opponent, the incomparable Roger Federer.

New York : The improbable did not happen but India's Sumit Nagal exited the US Open fighting, stretching and even earning the respect of his opponent, the incomparable Roger Federer.

In another first-round match featuring an Indian, Prajnesh Gunneswaran got a taste of high-level tennis, losing to world number five Daniil Medvedev in straight sets at the Flushing Meadows on Monday night.

With their losses, India's singles challenge drew to a close on the opening day itself. After taking a set off Federer, Nagal lost 6-4 1-6 2-6 4-6 in a match that lasted two hours and 50 minutes here on Monday night to bow out after making his maiden Grand Slam main draw.

"I think he knows what he can bring. That's why I think he's going to have a very solid career," said Federer after the match. The debut, at least in the opening set, was impressive as he stretched the "rusty" Federer, a five-time champion here with a career tally of 20 Slams.

But the gulf between Prajnesh and his fancied Russian opponent, who recently vanquished multiple Grand Slam winner Novak Djokovic, was wide and apparent as he lost 4-6 1-6 2–6.

Nagal was more competitive. The 24-year-old troubled Federer quite a bit during the much-anticipated match and the Swiss legend's problems were also compounded by his own unforced errors.

One of the game's all-time greatest players, Federer had a word of praise for his opponent from India. "...of course it's not the game that comes out with the biggest surprises. It's really consistent. I think he did it very well tonight," Federer said after the match.

Asked what he thought was the standout feature of Nagal, Swiss legend Federer said, "I guess maybe how he handled the moment." "I think his game is based on being really consistent, moving well, moving the ball around well. Sort of very much a clay-courter.

Nagal became only the fourth Indian to win a set in the main draw of a Grand Slam in the last 20 years.What made it special was that it came against Federer, a colossal figure across all sports globally.

Only Somdev Devvarman, Yuki Bhambri and Saketh Myneni have managed to win a set in a Grand Slam main draw before Nagal, in the last two decades.

The Indian stunned the crowd by breaking Federer's serve in the third game with the Swiss committing a double fault on the second breakpoint. While a "rusty" Federer was still measuring up his newest rival, ranked 190 in the ATP charts, Nagal, with his deep returns, was setting up winners -- some eye-catching inside-out forehands.

While many would not have expected such a sight, Nagal further shocked the crowd when he broke Federer for the second time and served out the set after being down 0-30.

Hitting deep returns and going for his shots fearlessly and not allowing Federer to come on to the net were key to Nagal's first-set exploits even as the Swiss struggled to contain his unforced errors.

Federer had 19 unforced errors to 9 of Nagal in the opener. The anticipation grew but Federer shook off the rustiness to dismantle Nagal's game after that. He began serving well, if not his best, and dictated the play with his strong returns, killing points at will at the net.

In no time, he zoomed to a 5-0 lead in the second set and served it out in the seventh but not before Nagal had saved six set points and also earned two break chances.

Nagal was still fighting but Federer was too hot to handle. The pattern remained the same in the third and fourth sets with Nagal getting a good point here and there but it was largely one-way traffic.

After fighting hard for two hours and 25 minutes, Nagal had earned some fans and he walked out of the Artur Ashe Stadium signing a few autographs and to a loud applause.

Nagal, who made the main draw through qualifying, returns from the US Open not only richer by USD 58,000 but also with the experience of what it takes to compete at the biggest stage.

Prajnesh took sometime to find his range even though long rallies featured from the word go. The Indian left-hander began aggressively but could not maintain his intensity after losing a well-fought first set at the Louis Armstrong Stadium.

The Indian dropped his serve in the first game of the match but broke back Medvedev in the fourth with a crushing inside-out forehand winner after serving at love. The Russian broke back immediately when he placed a cross-court forehand from baseline in the open court.

Medvedev nosed ahead again with another break of serve and consolidated it with a hold. Prajnesh mixed it up nicely by striking hard from the baseline with his free-flowing forehand and played some deft drop shots to set up points.

Prajnesh's body language was aggressive while Medvedev largely remained calm as he served big and his solid returns in long rallies helped him take those extra points.

Unforced errors from Prajnesh, when Medvedev served for the opening set, made the job easy for the world number five. 'He is very consistent. He does not make many errors.

But I did feel I was able to hit him with my game. I needed to do it consistently and for that I needed to move well, but I twisted my ankle and it made it a bit difficult," Prajnesh told PTI, reflecting on his defeat.