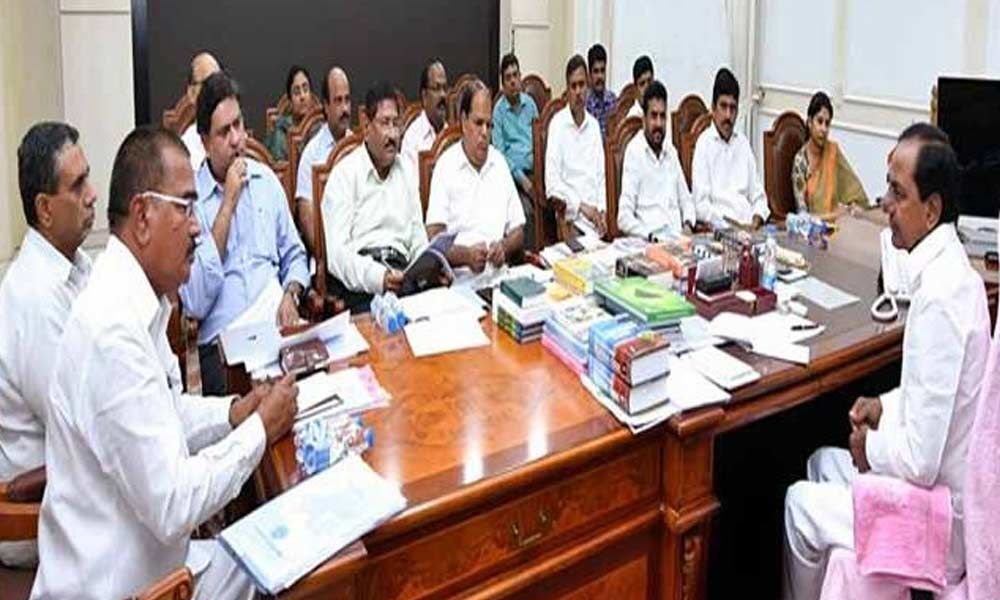 Chief Minister K. Chandrashekhar Rao has instructed the officials concerned to make arrangements for the supply of adequate stocks of Urea for the farmers in the villages immediately.

Hyderabad: Chief Minister K. Chandrashekhar Rao has instructed the officials concerned to make arrangements for the supply of adequate stocks of Urea for the farmers in the villages immediately.

The Chief Minister said that within the next three to four days, the Urea required for the farmers should be kept at the disposal of farmers. He also instructed the Urea stocks lifted from the Ports should not be kept at the stock points and instead they should be directly supplied to the villages.

KCR held high-level review meeting here at Pragathi Bhavan on Friday the supply of Urea to farmers. A detailed discussion took place on the demand for Urea in some places in the State.

The Agriculture officers have explained to the CM the reason behind unprecedented demand for Urea. They told the Chief Minister that the Central government has decided to supply fertilizers to farmers under direct benefit Transfer method. Due to this, traders and private companies have not procured fertilizers in large quantities. During the Kharif season in the last four years, there was a demand for 6 Lakh tonnes of Urea. This August end 6 lakh tonnes of Urea reached farmers. This time around, since Paddy, Corn and Cotton required Urea there is an increase in demand.

The Agriculture Department, keeping in view demand from the farmers have placed orders for Urea procurement with several private companies. Since the Urea is transported by ships, there is some delay took place. Keeping in view the rise in demand, the Chief Minister instructed that Urea should be procured immediately and supply the same to the villages.

As much as 15 Lakh tonnes of Urea from IDL, IFFCO, KRIBHCO, NFL has reached the ports of Visakhapatnam, Kakinada, Gangavaram, Krishnapatnam, New Mangalore Ports. From these Ports, Urea is to be transported by railways to the various districts.

Since it will be delayed if Urea is supplied through normal transportation, the CM himself took the initiative in getting early transport of Urea.

The Chief Minister spoke to South Central Railway Chief Operations Manager Sivaprasad, Chief Fleet Manager Nagya over the phone. He requested them to arrange for 25 special Goods trains to transport Urea stock from the Ports to various districts in State. He wanted the speed transportation of Urea by these goods trains. Urea should be transported by the Goods trains to the stations, Jagtial, Mancherial, Adilabad, Pedapalli, Warangal, Mahabubabad, Karimnagar, Sanathnagar, Khammam, Kothagudem, Mancherial, Timmapur etc., The railway officials have agreed to the request and assured that Goods trains would be organised as per the CM's request on Friday itself.

The CM has decided to utilise the services of 3,000 trucks besides the goods trains to get urea from Ports to the State. He wanted trucks in Telangana and Andhra Pradesh states to be drafted to go to Ports. In this context, the CM spoke with AP transport Minister Sri Perni Nani. The CM requested Sri Nani to lift large quantities of Urea through Trucks from Gangavaram Port and extend his cooperation. Sri Nani assured that he would send as many trucks as possible to supply Urea. The CM wanted the officials to estimate how much demand is there from each Mandal and accordingly supply the quantity of Urea. The CM has instructed Agriculture Minister Sri Niranjan Reddy to monitor the matter.

He instructed that about one-lakh tonnes of Urea should be made available in the next three to four days and farmers should not be waiting for Urea. The CM also instructed Ministers Niranjan Reddy, Prashant Reddy to monitor the matter from Pragathi Bhavan. Accordingly, both the ministers are having discussions with the railway officials, various Companies, AP State Officials. The CM instructed that officials and others concerned should work hard day and night till each farmer got Urea based on his requirements.

As per the CM's instructions, the ministers and officials have started monitoring the situation from Pragathi Bhavan. They have summoned representatives of various companies to Pragathi Bhavan. Through them, an indent for railway Rakes has been placed with the railways. The Railways are making arrangements to send 25 Rakes to the Ports. Each rake, Goods train will carry 2600 Tonnes of Urea. Through Trains, about 60,000 Tonnes of Urea will reach to the district in the next two to three days. In the same time, Urea will also be supplied through 4,000 trucks. The entire requirement of Urea will reach villages in the next three to four days. The Minister requested farmers to wait with patience. They have also cautioned Farmers that some may try to sell urea at a premium price due to the existing shortage. The Ministers also assured that the required quantity of Urea will reach and the issue will be solved in the next three to four days.