CM for bringing back past glory of Panchayat Raj movement 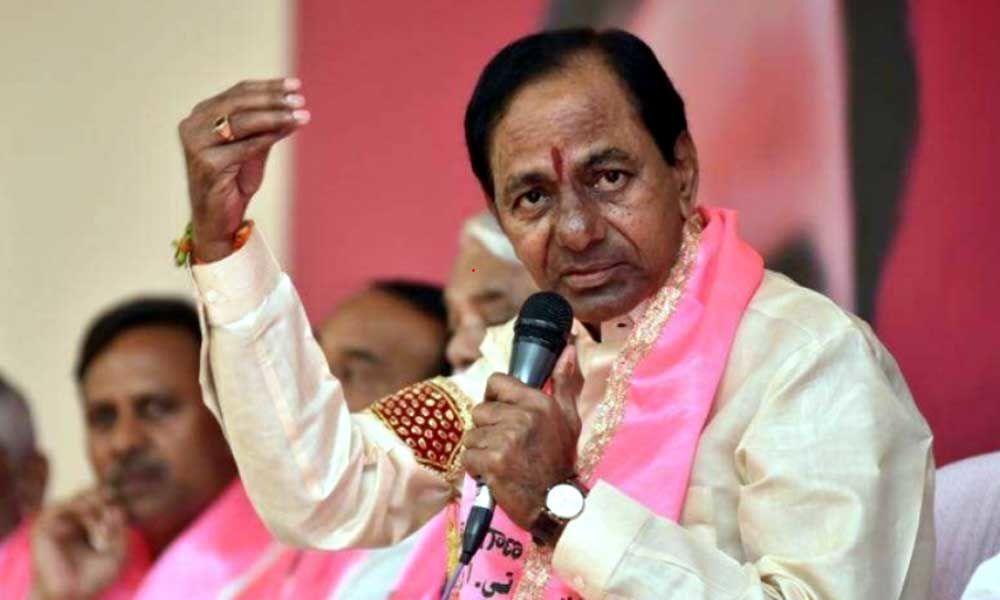 Chief Minister K. Chandrashekhar Rao has called upon the newly elected local body representatives to play an active role with the spirit of the Panchayat Raj movement and Gram Swaraj as the aim and development of the village regions as the goal.

Hyderabad: Chief Minister K. Chandrashekhar Rao has called upon the newly elected local body representatives to play an active role with the spirit of the Panchayat Raj movement and Gram Swaraj as the aim and development of the village regions as the goal.

The Chief Minister said Panchayat Raj movement and Cooperative movement have played a vital role in the village development, such movements should get their past glory back. In this context, the CM announced release of Rs 10 Crore fund from the CM Special Development Fund for the Zilla Parishad, which stood first in reaching the target, and worked for the village development. The CM felt that all the villages in the State should emulate and become one like Gangadevipally, Mulkanur and Ankapur villages. He announced that a training workshop would be conducted for the newly elected Chairpersons and Vice Chairpersons of the Zilla Parishad in Hyderabad shortly. He wanted the elected representatives to play a key role in implementing the new PR Act with the sole aim to make every village clean, tidy and with lots of greenery.

CM KCR on Tuesday held meeting with the newly elected Chairpersons and Vice Chairpersons of the Zilla Parishad at Pragati Bhavan here. The CM in detailed explained to them about the steps taken to strengthen the Panchayat Raj institutions, the responsibilities of the elected representatives.

"I congratulate you all who have been elected unanimously as the Chairpersons and Vice Chairpersons of Zilla Parishad and my best wishes to you. I pray to God that in the next five years of your term, you should get good name and have the necessary strength and commitment to achieve this. I wish that you should attain higher positions. It is better if you can live upto the position that you have got now. Nobody learnt everything since birth. People learn new things based on the circumstances. A man should learn knowledge till his last breathe. Our life is very short. We try to get a good name from this short span of life. An unenlightened can become wise someday, but a fool can never become an enlightened person. A fool thinks he knows everything. But those who try to get comprehension over several fields will become successful in life and can make a step forward in their field of choice. Like every other subject, learn about Panchayat Raj issues," the CM exhorted the gathering.

"We should not lose our original nature after getting on to some power. If we do that, people will laugh behind our backs. Don't try to get unnecessary pride. You should not change just because you got some post and power. The respect and honour that we deserve we will get it automatically. As a saying goes, it is better to have qualities by birth than by borrowing some. Our behaviour style will benefit us. People have several problems. They come to you seeking solutions to their problems. The best quality of a leader is to listen to others. You also do the same. Listen to their problems patiently. Extended basic courtesies like asking them to sit. Then they will get relief. Then see how can you solve their problem. Behave naturally with them and show concern. This will get you name, fame and higher positions," the CM advised them.

"All of you got these positions based on your ability coupled with good luck. This is all due to you good behaviour. You don't require any investment to do good deeds. Simple and effective speaking should be our hallmark. People always watch how people's representatives are showing concern over the people's issues. This will get us higher positions. Winning and losing are natural phenomena. But for those in politics, the primary duty is to have regular relationship with the people," the CM said.

"In the past ZP Chairpersons have no major work. Recently when I met the Central Finance Commission, I have explained to them about our system. I told them that ZP Chairpersons here are given the status of Minister of State. I also told that ZP Chairpersons would work actively henceforth. The Finance Commission Chairman has assured that necessary financial help will be provided. We have been thinking to strengthen your system. We will transfer all the powers and responsibilities as guaranteed under the Constitution. Never in the past, we got 32 ZP results one-sided. This has enhanced your responsibilities and workload. Your role should be higher. ZPs should become active, your duties and responsibilities should be strengthened," the CM observed.

"Panchayat Raj was a great movement. It was formulated soon after the independence of the country. Local self-rule was initiated to make States more independent and for decentralization of the power. Centralised administration had not yielded results on the field. Panchayat Raj movement was aimed at then and their development locally. Its first name was Community Development. During the regime of Pandit Nehru, when he met US President Eisenhower in US, the US President introduced him to Sri SK Dey. Eisenhower told Nehru that Dey was an Indian working for the development of rural US and doing an exemplary work. Pandit Nehru requested Dey to come back to India. Dey stated that he was against Pandit Nehru's first five-year plan, in which top priority was given to the immediate industrialization as against the need of the country, the irrigation sector. Dey suggested to Nehru that self-reliance in food sector should be given the top priority and he rejected Pandit Nehru's invitation.

After coming back, Pandit Nehru discussed the points raised by Dey in the Cabinet and also in the party circles. This had resulted in a change in the priorities in the second five year Plan. Under the name of Modern temples, work on the construction of major irrigation projects had begun. This later lead to the country becoming self reliant in food. Impressed by the initiatives taken by Pandit Nehru, Dey wanted to comeback to India and wrote a letter in this regard. Pandit made him immediately Rajya Sabha MP and Cabinet minister. He was allocated the Community Development portfolio. Rural India was placed on the hands of Dey. He immediately swung into action. He came to Hyderabad and started living on the campus of National Institute of Rural development (NIRD). From here he had spread the Panchayat Raj movement all over the country. For the first time in the country. The first Samithi was created in Patancheru with P Ramachandra Reddy as the President. This is how the Panchayat Raj movement took birth and started its journey," the CM explained.

"For a long period, local bodies functioned in tune with the spirit of the Panchayat Raj movement. Sanitary programme used to be the best. Unfortunately that spirit had lost these days. After 70 years of independence, go to any village the unhygienic conditions will baffle you. Villages have become huge thrash bins, Why this degeneration? Why cry for drinking water? Telangana is very much in the villages. If we develop village properly, the state will develop. You are all educated and hence can understand things in the right perspective. Take vow that you will develop the villages. Change should be brought in the villages, which are in dire straits now. The change should be a qualitative one," the CM stressed the need.

"In order to get awareness about the Panchayat Raj system, as an MLA I went for a training programme in the NIRD. I stayed for six days in the hostel for seven days training. That's how I got the awareness. You also try to get some awareness. You all take your charge in July. Before that you should go for a training session with Telangana State Institute of Rural Development. Our officers will design a good course for you," the CM said.

"We have appointed secretaries to the Gram Panchayats. Panchayat Raj Act is very stringent. If the secretary works well and the results on the expected lines, we will regularise the secretary services after three years. You have absolute control over the Panchayat Secretaries. Ensure that DPO, DLPO, EORD, MPDOs are doing their jobs effectively. We will finalise the administrative, financial and monitoring powers shortly. Change should be visible in six months," the CM told the gathering.

"For the Zilla Parishad that stands first, Rs 10 Crore funds will be released from the CM development Fund. If more than one on the top we will also release funds for them. All 32 ZPs should be on the top. We will fix some benchmarks and standards for this. My desire is that all the 32 ZPs should get Rs 320 Crore by standing first. Every ZP Chairman will get a new car. If you can get a feeling among that people that you can usher in a better change, nothing like it. Move among the people and strengthen the PR institutions. You have to take responsibility of development of every village. You have taken the lead role and leadership. You have to become inspiration from those working under you. The way we have achieved Telangana State the same way we should get development of the villages," the CM said.

"The schemes we have implemented on humanitarian considerations, like the Pension Scheme, Rythu Bandhu, Rythu Bhima have become popular and helped us winning the polls. Hence we have to payback to the people. For this you are the true players. Train Mandal Presidents like you. Create awareness among them as I did to you. Speaking to them with specific message. I am getting you training for this purpose only. We have to take forward the Panchayat Raj with the spirit with which SK Dey launched the movement. You should take leadership of 60 percent of the people living in the rural areas. Concentrate on making the villages as the focal points. Do your job sincerely and make your lives worthy. Get a good name and fame. The satisfaction, which you derive from this, is not found anywhere. Use you skills and abilities to develop rural Telangana in all the spheres. Every village should become one Gangadevipally, Ankapur and Mulkanur," the CM desired.