Cops pad up for IPL matches at Uppal stadium 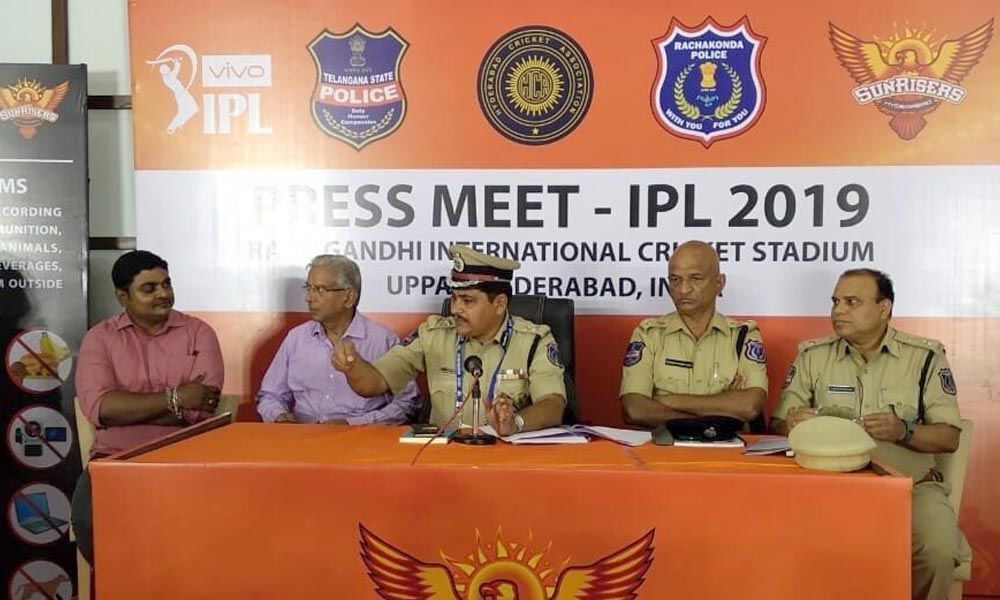 Hyderabad: Rachakonda Police Commissioner Mahesh M Bhagwat said all bandobust arrangements are made for the IPL cricket matches that will be held at RGI Cricket Stadium in Uppal.

Addressing the media on Thursday, the Police Commissioner said from March 29 to April 29, seven matches will be conducted. The home team Sunrisers Hyderabad will play on March 29, 31, April 6, 14, 17, 21 and on April 29.

A total of 2,300 police personnel are deployed for the bandobust. In order to avoid any untoward incidents a series of unprecedented measures are taken up at the stadium for the matches.

Four platoons of TSSP for armed guards at all entries and at check posts, 225 traffic members are deployed.

In and around the stadium, a total of 300 CCTV cameras are being installed to cover the entire area. A joint command and control room established to monitor all the CCTV footages for taking immediate action.

Anti-sabotage checks with the help of BD teams would continue round the clock until the matches are completed. VHF sets allocated to all sub-inspectors and above rank officers for quick response.

The scanners installed at the stadium will allow police and other security personnel to detect explosives and other prohibited material inside the venue. The services of Bomb Disposal team and sniffer dogs are pressed into service.

A Road Clearance Party, specifically for route clearance was spared for congestion free entry and exit of the players and VIPs, VVIPs into the stadium. Separate teams formed to tackle antisocial elements. SOT teams look after the block ticketing sellers and their agents.

Adequate signage boards will be erected at different places to make viewers reach stadium easily. The viewers are not allowed to park any vehicles on either side of the main road from Genpact to Uppal ring road and Uppal Ring Road to Vishal Mart, Ramanthapur and the vehicles have been parked at specified by the TSIIC parking areas only and parking provided by the HCA and Sunrisers authorities.

The physically challenged viewers, who possess passes are suggested to enter from Ramanthapur road and can enter into the stadium through outer gate No-3 after parking their vehicles at parking place-B.