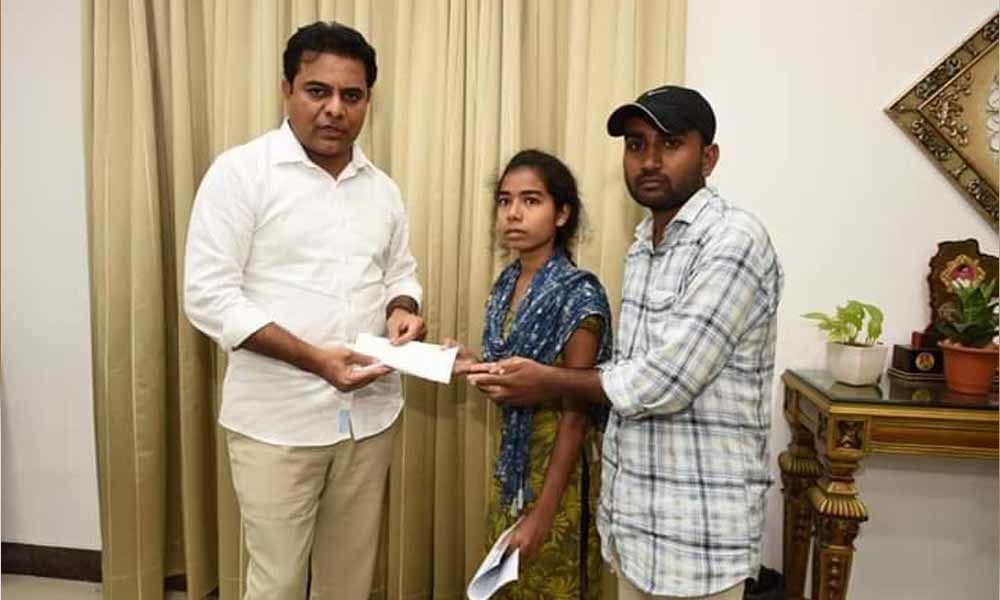 Hyderabad: Overcoming their weak economic background, two students Rachana and Anjali completed their intermediate and fared well in Engineering entrance exams. While Rachana is an orphan from a village in Jagtial district, Anjali is the daughter of an auto driver from Hasanparthy, Warangal.

During their crisis time, the two girls sought help from TRS Working President K. Tarakarama Rao and reached out to him through Twitter. When the stories of these two girls were taken to KTR, within hours he called them for a meeting and provided help.

Met with Rachana today and extended financial assistance towards her college expenses pic.twitter.com/kprzGnWzyb

Rudra Rachana is a native of Kathalapur Mandal, Jagtial district who lost her parents in her childhood. On completing her tenth standard from Jagtial Government Girls high school, Rachana later moved to State Home in Yousufguda and pursued her polytechnic diploma. By scoring a good rank in ECET, Rachana got a seat in Chaitanya Bharathi Institute of Technology (CBIT), Hyderabad.

Due to the financial crisis, Rachana couldn't take up the seat. When Rachana's story was brought to the notice of KTR through media. KTR immediately responded and stated that he would personally take care of her fee. Today Rachana met KTR at Pragathi Bhavan. During the meeting, KTR enquired about her fee and other expenses and provided the same in the form of a cheque. He also asked her to concentrate on her studies and not worry about the finances.

During the meeting, Rachana mentioned that there are a lot of orphans who score good ranks but are unable to pursue higher studies due to financial problems. She requested KTR to provide reservation to such student. KTR appreciated her thought and informed that he would take this to CM KCR's notice. KTR also spoke to Jagtial District collector Sharath over the phone and directed him to assist Rachana's sister and brother-in-law, who have been her guardians.

In another meeting, KTR interacted with Anjali, a student of Telangana State Residential Junior College, Hasanparthy. On scoring well in JEE, Anjali got a seat in IIT, Indoor. Anjali's father Ramesh is an auto-rickshaw driver in Hasanparthy. Failing to arrange a fee amount for Anjali's higher education, the family approached KTR over Twitter. Today, Ramesh and Anjali met KTR at Pragathi Bhavan. In their brief interaction with KTR, Anjali shared her ambition to become a civil servant and serve the nation. KTR wished her luck for her future endeavours and provided the required fee amount in the form of a cheque.