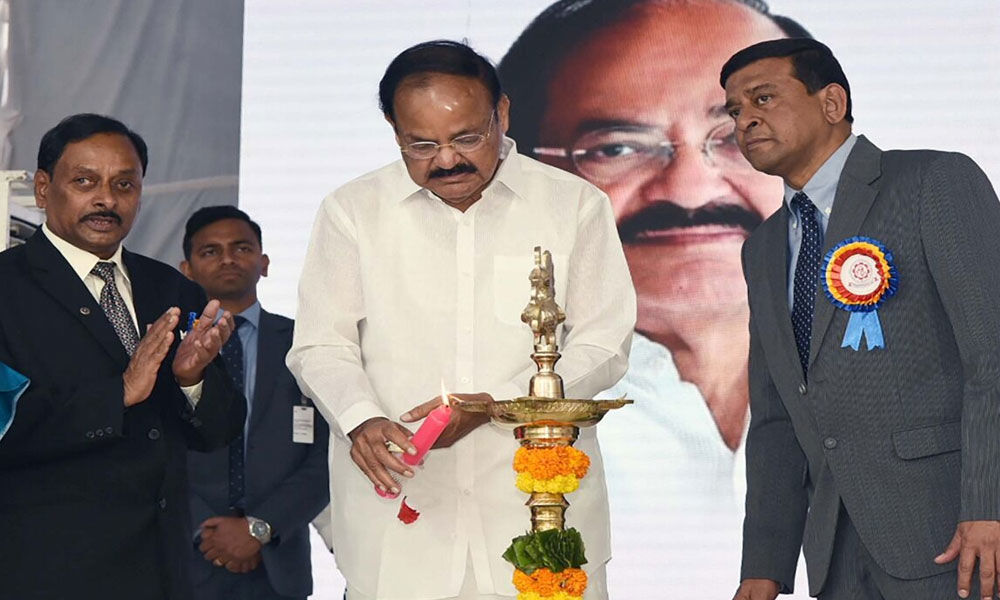 Hyderabad: Vice-President M Venkaiah Naidu Saturday stressed the need to make world-class drugs available at affordable prices, with thrust on research and innovation."There should be an unwavering commitment to high standards of quality in drug manufacturing and quality frameworks such as Good Manufacturing Practices should strictly be adhered to," he said.

Addressing the second decennial celebrations of Sarojini Naidu Vanita Pharmacy Maha Vidyalaya in Hyderabad, he called for a thrust on research and innovation.The Vice-President said new healthcare challenges were emerging every day, especially with the alarming rise in the number of non-communicable and lifestyle diseases and cancers.

While major multinationals and pharma companies would be interested in producing and selling drugs that cater to common and chronic diseases affecting larger populations, there was a need to develop new molecules and drugs to combat lesser known diseases, particularly the group called 'rare diseases', affecting more than 70 million people in India, he said.

While it is estimated that there are around 7,000 rare diseases in the world, most diseases have no treatment and the costs are prohibitively expensive in cases where they are available, he said

Venkaiah Naidu expressed confidence that the goal to make India a global leader in end-to-end drug manufacture would be achieved in the coming years in view of the initiatives taken to promote the pharmaceutical sector in the country.

"India has undertaken a long and arduous, yet rewarding journey in Pharmacology, from the 'Charak Samhita' of traditional Indian medicine system, to becoming the third largest drug manufacturer in the world, in terms of volume, in the field of modern medicine, he said. Maintaining its legacy of being a pioneer in the field of pharmacology, India today enjoys the exalted position of being the 'Pharmacy to the world', he said.

the vice president noted that India is the largest provider of generic drugs globally and that 80 per cent of the anti-retroviral drugs used worldwide to combat AIDS are supplied by Indian pharma companies."I was informed that over 65 per cent of WHO's demand for DPT and BCG vaccines and 90 per cent measles vaccine are supplied by India. Thus, India's contribution to global healthcare has been spectacular," he said.

Naidu said he would like to see the country emerge as the world leader in generic medicines.

"At the same time, we should not hesitate to promote Indian systems of medicine," he said.

The focus should remain on speedy introduction of generic drugs into the market, he said.