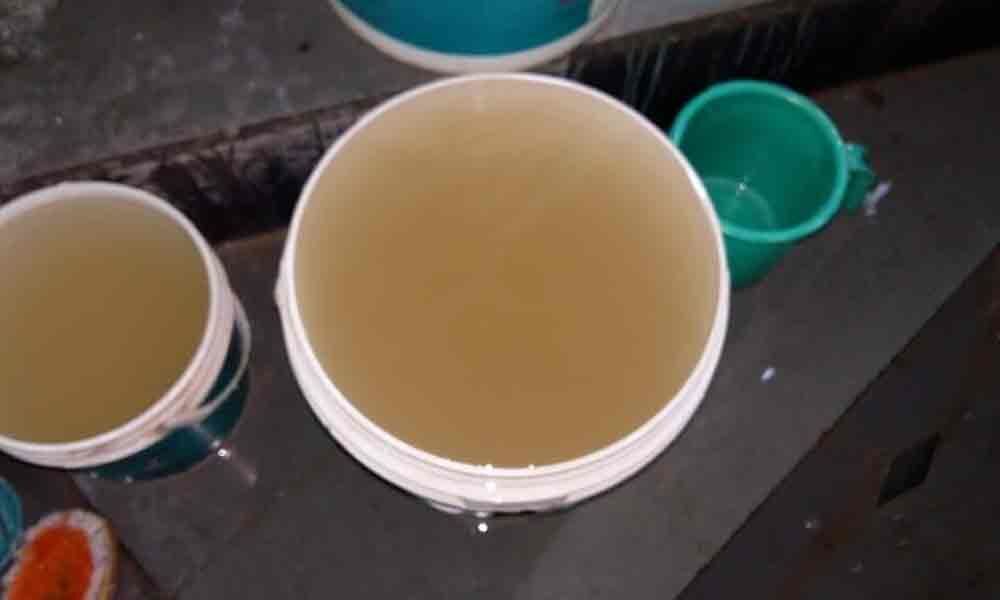 Rajendranagar: The spate of complaints regarding contaminated water being supplied to the residents has put the officials of HMWS&SB onto to task for a whole day, while the abrupt rains in the afternoon also played a disruptive role in sorting out the issue.

In the morning, denizens of areas especially Hassan Nagar, Indra Nagar and Part of Sulaiman Nagar were shocked to see murky water pouring in from their taps, making it difficult for them to preserve it even for domestic use.

Soon the mobile phones of the officials started ringing with spate of complaints regarding supply of contaminated water. This put the entire official machinery in trouble over water supply, for whole day. Though the officials were fully aware, they felt that petty technical snag could have caused the inconvenience. They by all means failed to convince the people.

Denying the reports of contaminated water, the General Manager HMWS&SB Kader Mohiuddin explained "People are likening the turbidity of water to that of contamination. It is actually turbidity formed while supply line was restored after maintenance work carried out few days ago."

Recently, he elaborated, the maintenance work was carried out closing down the main supply line of Krishna River phase-I to Hyderabad City. This possibly led to a formation of turbidity in the water with a swash movement in the supply line, soon after restoring the supply. The issue would last no longer than a day or two, assured the GM.

The people were not ready to buy the officials excuse saying that they have avoided storing a single drop of water even for the domestic use fearing the contaminated water could give rise to water-borne diseases.

"Where do we go now to get the drinking water as the next supply would only be released after two days? If there is any issue caused the inconveniency to the people and matter was supposed to be solved by the same day or next, the officials must have to facilitate the citizens with fresh supply soon after the issue resolved", said Mohd. Zaheeruddin, a social activist of Hassan Nagar.

"While the citizens couldn't able to get the potable water in the morning, the abrupt rain in the afternoon added more woes to their problem where they were completely confined to their houses.," said Mohammed Jahingir Area Sabha Member, Hassan Nagar.