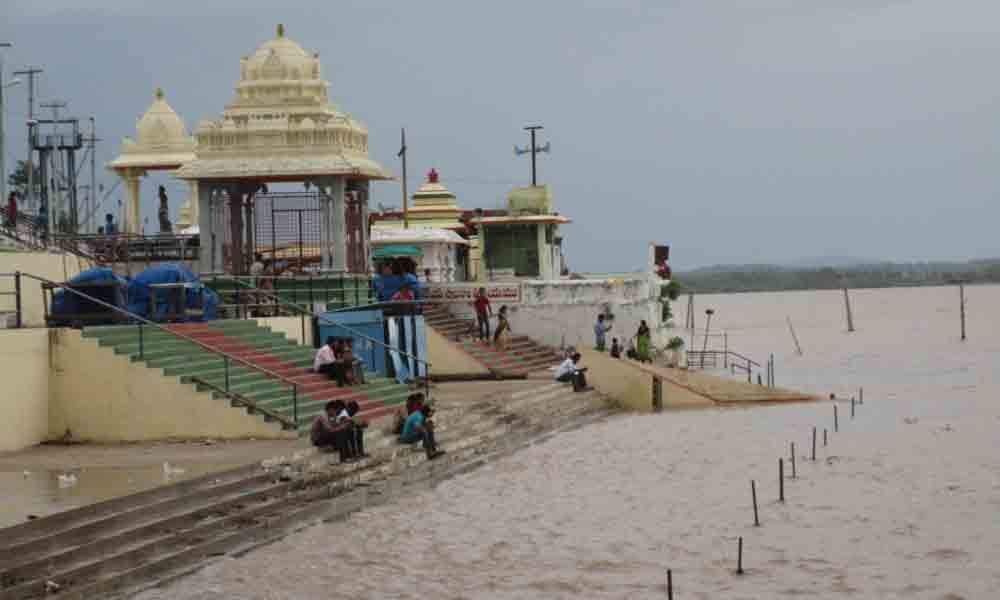 The water level in river Godavari that has been on the rise for the last few days has brought joy on the faces of devotees and residents in the Bhadrachalam town.

Bhadrachalam: The water level in river Godavari that has been on the rise for the last few days has brought joy on the faces of devotees and residents in the Bhadrachalam town. The heavy rains in upper catchment areas of the river and in neighbouring Maharashtra, Chhattisgarh and Odisha have brought huge inflows into the river with the water level touching a record 40 feet mark on Tuesday evening.

After a long time, the water level in the river has raised above 32 feet mark. Speaking to The Hans India, a senior citizen of the temple town, TV Ramana, said that the Godavari has been receiving good amounts of flood waters for the last 15 days and it was surprising to see the water levels raise one day and fall the next day. He recollected same moments when the river was in full spate in 1986.

However, a devotee, K Rama Sastry, expressed his unhappiness. He said he comes to Bhadrachalam every month to have the darshan of the Lord. After taking a holy dip in the river, he goes for the darshan. However, this time he was not allowed to take a holy dip as the river was in full spate.

Similarly, A Srilakshmi, a devotee from Vijayawada also echoed the views of Rama Sastry.

"Every Shravana Masam, we take a holy dip in Godavari and perform pujas at the Lord Rama temple. But, this time due to floods, the officials are not allowing us to take bath in the Godavari waters."

Meanwhile, the officials stated that water in the river could fall to 35 feet on Wednesday as there were no rains in the State and the river's catchment areas on Tuesday.

Further, the officials have continued monitoring flood situation. They have been pumping out the flood waters to prevent the inundation of the temple town.