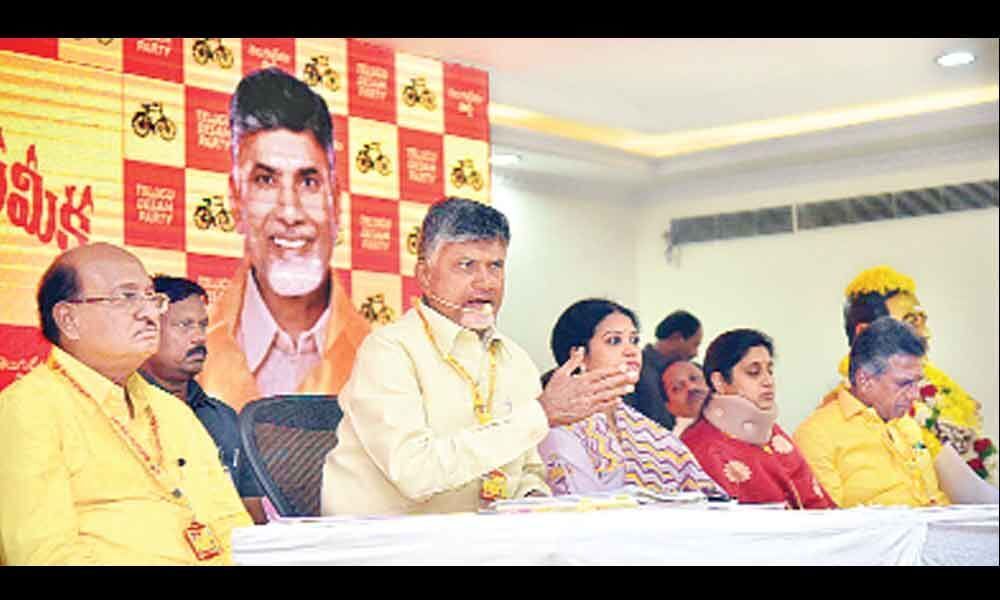 Amaravati: TDP president N Chandrababu Naidu said his party had to face many villains during the run up to the general election and the attack on the TDP continues even after the elections.

Naidu said the good work done by the government has helped the party in facing all the challenges that were thrown against it by Prime Minister Narendra Modi, TRS chief KCR and the YSRCP.

He said the people of the state had understood the game plan of the trio and firmly stood by the TDP as they wanted the development to continue.

Hence, it is a foregone conclusion that the TDP would form the government again, Naidu said, while addressing a brainstorming session with Rajahmundry candidates of Lok Sabha and the seven Assembly segments under it on Saturday.

Naidu called upon the rank and file to gear up for the local body elections. He said before the elections, he had taken the opinion of the people from various sections and selected candidates.

The continuous interaction with the people and exposing the machinations of the opponents who had hatched a major conspiracy to stall the development of the state had helped in getting people's support.

Modi and his party had tried his best to create a trouble for the party and the government. The BJP wanted to hit them below the belt in some form or the other.

Modi was aided by KCR and they fired their guns over the shoulders of YSRCP chief Y S Jaganmohan Reddy. One after the other, the conspiracies were hatched but the TDP had effectively overcome all those problems as it continued to be with the people.

Now, while defeat was staring in the eyes of the YSRCP, they are trying to play a mind game that they are getting ready for swearing-in and that the list of Cabinet ministers was being finalised, etc.

They wanted that the voting percentage in the state should be less. Sensing their strategies, Naidu said, he had appealed to the people to come out in large numbers and defeat their attempts and people responded to his call. He said the TDP should win all future elections.

He said the party posts will be based on the majority the contested candidates got at respective polling booths.

Elevation of a leader to a higher post would depend on the votes polled by the candidate in each booth. If the votes polled were less in any booth it means that the respective in charges did not work properly.