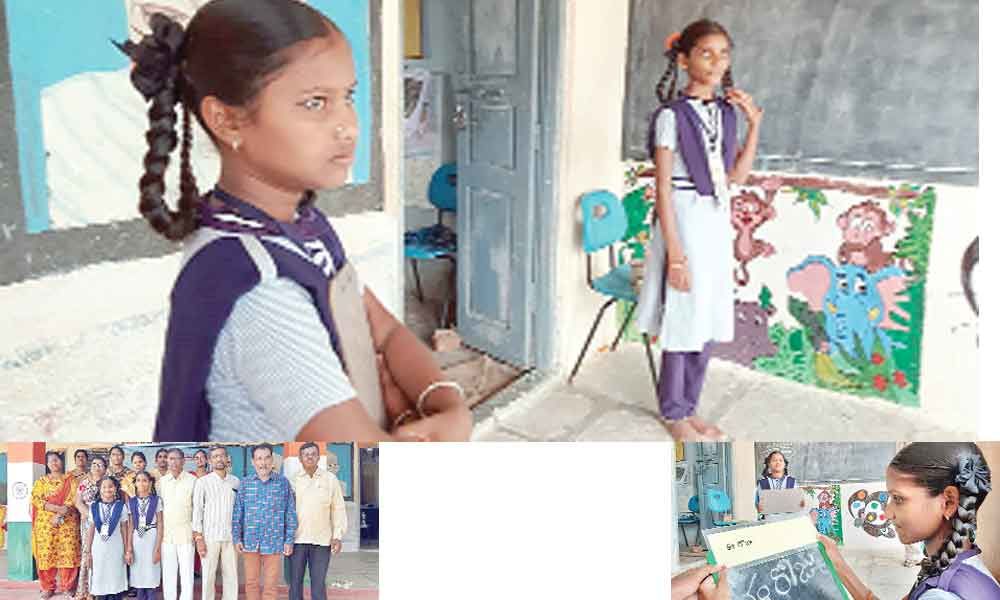 Till so far we are aware that communication is done only by voice or by writing and reading, however, here is a case where the school students of the Government High School in Potireddypally

Narayanpet: Till so far we are aware that communication is done only by voice or by writing and reading, however, here is a case where the school students of the Government High School in Potireddypally village in Kosgi mandal of Narayanpet district are fast catching up with the new language of eyes and communicating with each other using the movements of eye lids and eye balls.

Communication using the movement of eye lids and eye balls, though is not new for artists who perform Bhartnatyam and other dances and other folk art forms, however, developing it into a complete language by dedicating each movement to each alphabet in Telugu language is first of its kind development observed here with the students of Potireddypally Government School.

In ancient days it is said that the language of eyes, also called as Netravadhanam was used by kingly scholars and those who did spying and those who lead the soldiers and armies.

However, this language which is called as spy language had slowly faded away and was confined only with a few art forms and was on the verge of extinction.

However, thanks to the Telugu teacher Hanmanthu of Government High School in Potireddypally village, where he learned this language during the World Telugu Mahasabhalu conference held in Khammam district in 2014.

The Telugu Teacher after being transferred to Potireddypally village shared the language he learned with the school students.

The two girls from 7th class Ramadevi and Santoshi, both are brilliant learners after they came to know about the new eye language, they readily grasped it and learned and fast developed the skills of communicating in the eye language in just 20 days.

While Ramadevi reads the sentences from a book and expresses the matter through her eyes, Santoshi writes sentences by observing the eye expressions of Ramadevi.

The Telugu Teacher Hanmanthu who introduced the Netravadhanam language to these two girls himself was astonished at the skills developed by these two girls and he gave them more training and now both the girls have become experts in the language.

"Netravadhanam is a complex art form, where only eminent personalities during the ancient period used it. In Telugu literature only literary experts used it and learned it.

However, as I found it fascinating I decided to learn it and pass it on to the students, so that this ancient language of eyes can be known to the future generations," said Hanmanthu.

After learning about new art form of language of eyes being taught to the school children, the Kosgi MEO and DEO of Narayanpet district Ravinder visited the school and witnessed the unique performance of the students and appreciated the efforts of the school teacher and thee students.