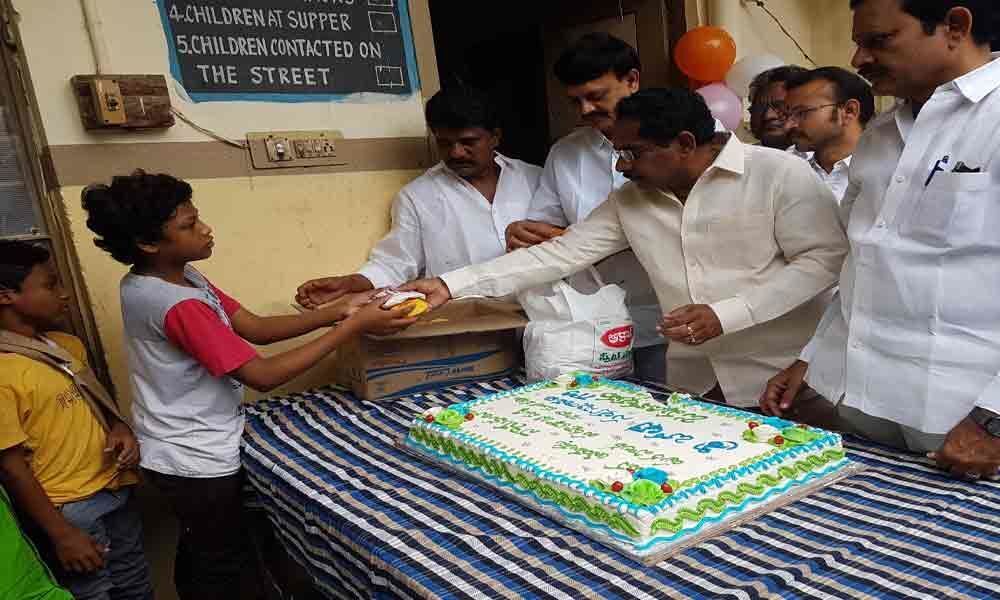 The birthday of Municipal Administration Minister Botsa Satyanarayana was celebrated at SKPV Orphanage in Gandhinagar on Tuesday.

Vijayawada: The birthday of Municipal Administration Minister Botsa Satyanarayana was celebrated at SKPV Orphanage in Gandhinagar on Tuesday. The programme was organised by YSRCP leader Buddha Nageswara Rao. Cake was cut and distributed to the children of the orphanage on the occasion. Later, fruits, sweets, notebooks, pens, school uniforms were distributed to the children.

Speaking on the occasion, Nageswara Rao said that the Satyanarayana was a strong BC leader from North Andhra Pradesh and strives for the uplift of the poor and the needy. He recalled that the minister was close aide to former Chief Minister YS Rajasekhara Reddy and took active part in reaching the welfare schemes to the beneficiaries.

In the same way Satyanarayana was with the present Chief Minister YS Jaganmohan Reddy for the last nine years in strengthening the party, he said and added that he is taking initiative in Navaratnalu scheme to reach the poor. YSRCP leaders M Srikanth, K Rajashekar, B Sekhara Babu, Y Chalapati Rao, Kashi, B Shankar and others were present.