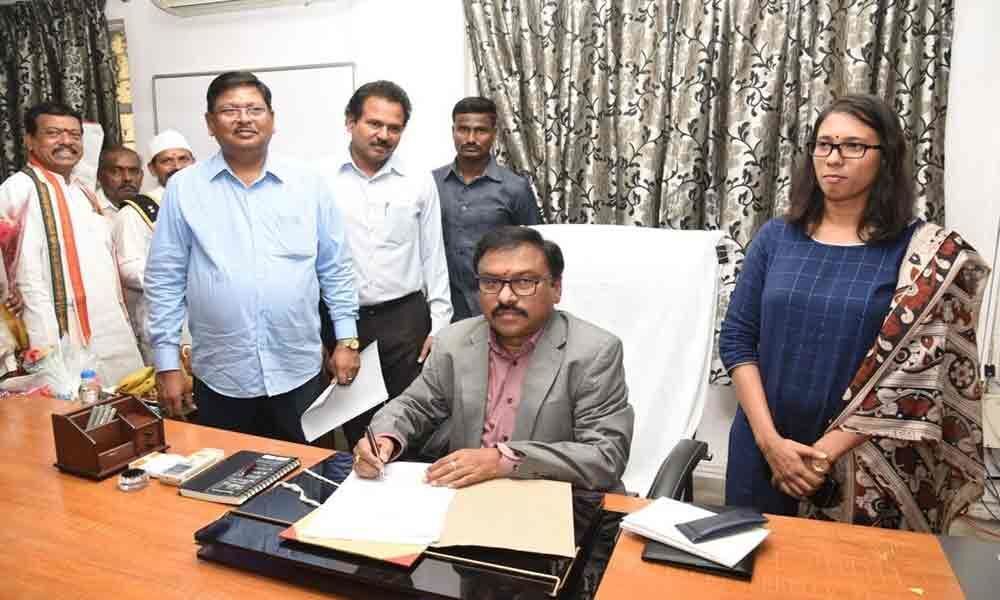 Dr Pola Bhaskara took charge as the collector and Prakasam district magistrate on Sunday from the in-charge collector S Nagalakshmi. Bhaskara, an engineering graduate from REC Warangal, started his journey in government as an AE in R&B Department in 1989.

Ongole: Dr Pola Bhaskara took charge as the collector and Prakasam district magistrate on Sunday from the in-charge collector S Nagalakshmi. Bhaskara, an engineering graduate from REC Warangal, started his journey in government as an AE in R&B Department in 1989. While working in various positions, he successfully cleared the Group I exam in 1994 and worked as RDO, SC Corporation ED, DRO, DRDA PD at various places.

He was conferred IAS in 2010 while working as the additional commissioner in Visakhapatnam Municipal Corporation and promoted as joint commissioner. He worked as the joint collector of Srikakulam, before being posted as joint executive officer of TTD in 2013.

After serving a long time in TTD, he was transferred as director for social welfare department in February 2019, just before the election notification. Known as an uncontroversial person, Bhaskara is posted as the district collector for first time in his service, in Prakasam district.

After assuming charge, Bhaskara announced that all round development of district is his priority. He said that under a programme 'Dasa-Disa' proposals were prepared to provide drinking and irrigation water, education, medical facilities, employment opportunities for the youth, minimum support price for farmers would be provided and requested the cooperation of everyone for that.

He said that importance would be given for improvisation of transport facilities to remote places in the district. He assured that the issues being faced by the farmers with the revenue department will be sorted out soon.

He said the Navaratnalu programmes being promoted by the chief minister will be implemented in the district on priority with increased transparency.Joint collector S Nagalakshmi, AJC Dr A Siri, trainee collector Dhanunjay, DRO V Venkata Subbaiah and other district officials congratulated the collector.