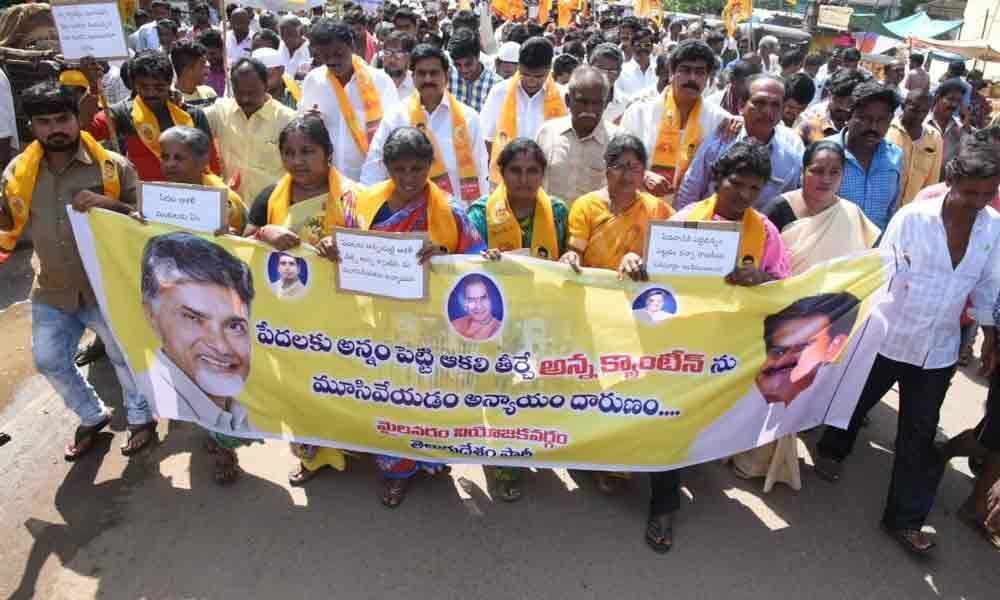 Former Minister Devineni Umamaheswara Rao alleged that 1.2 crore poor people have been starved because of closure of Anna Canteens across the state.

Vijayawada: Former Minister Devineni Umamaheswara Rao alleged that 1.2 crore poor people have been starved because of closure of Anna Canteens across the state. Umamaheswara Rao along with TDP leaders and followers participated in a protest at various places of Mylavaram constituency as per the call given by party president and former Chief Minister Chandrababu Naidu on Friday.

He said closing Anna |canteens is an injustice done to the poor people in the state. He alleged that false cases were booked against 17 TDP activists in Mylavaram. By increasing sand price, the government had dragged 2 lakh construction labour and workers on to the roads.

He further alleged that at present a bag of sand costs more than a bag of cement. He criticised that when the capital region of Krishna and Guntur were flooded, Chief Minister YS Jaganmohan Reddy was in America on tour with family. He alleged that flood water entered Chandrababu Naidu's house as the flood water was stopped for four days at Prakasam barrage without releasing into the sea.

Uma said there is a conspiracy to relocate the capital Amaravati to Idupulapaya betraying the farmers who have given 34,000 acres for the capital city.