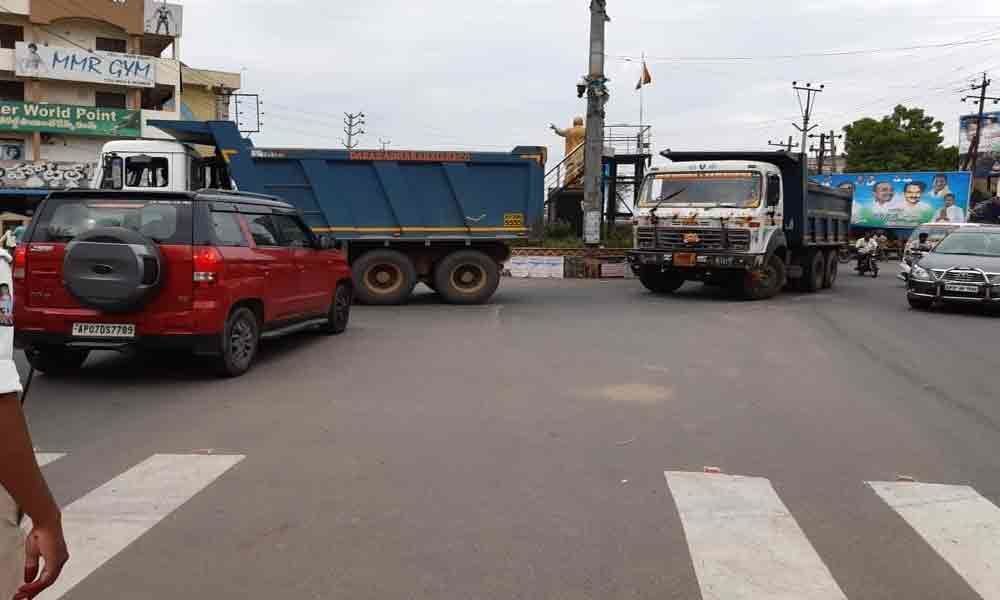 x
Heavy vehicles take a turn at the dangerous Pipula Road Junction, which is part of the IRR in Vijayawada
Highlights

Construction of bypass from Gollapudi to China Avutupalli in Ibrahimpatnam passing via Surampalli will solve many traffic problems being faced by the people in the city.

Vijayawada: Construction of bypass from Gollapudi to China Avutupalli in Ibrahimpatnam passing via Surampalli will solve many traffic problems being faced by the people in the city. The National Highways Authority of India (NHAI) is preparing a Detailed Project Report (DPR) and it will be completed in another four months.

Later, the works will be awarded to bidders for construction of bypass, which was delayed by nearly eight years.The Central government project was sanctioned more than eight years ago, and land acquisition was also completed for the same. Due to administrative reasons, the 30 km highway stretch works were not started.

Now, the YSRCP government after coming to power last month, decided to start the works as early as possible. Chief Minister Y S Jagan Mohan Reddy during the recently held collectors' conference asked the officials and the ministers to take measures to start the construction works of the bypass road.

The Detailed Project Report for 30 km stretch will be ready in another four months, said M Vidya Sagar, Project Director of the NHAI. He said the land acquisition work is already completed and now six lanes will be built instead of four lanes. Earlier, it was proposed to build four-lane highway.

As there was no bypass, many vehicles are passing via Inner Ring Road, which is built along Ajit Singh Nagar, Kandrika and Gunadala. Residents of Kandrika, Ajit Singh Nagar and other areas are panicked with the moving of heavy vehicles on the IRR, which was built by VGTM Urban Development Authority now upgraded as CRDA.

Pipula Road junction has become one of the dangerous areas in the city with passing of heavy vehicles every day. The only way to get rid of from the traffic problem in Ajit Singh Nagar area, Kandrika, Santhi Nagar and other areas is speedy construction of Gollapudi –Chinavutupalli bypass road. The estimated 30 km six-lane stretch may cost Rs 900 crore and will solve the traffic problem at Ramavarappadu ring road and other areas in the city.