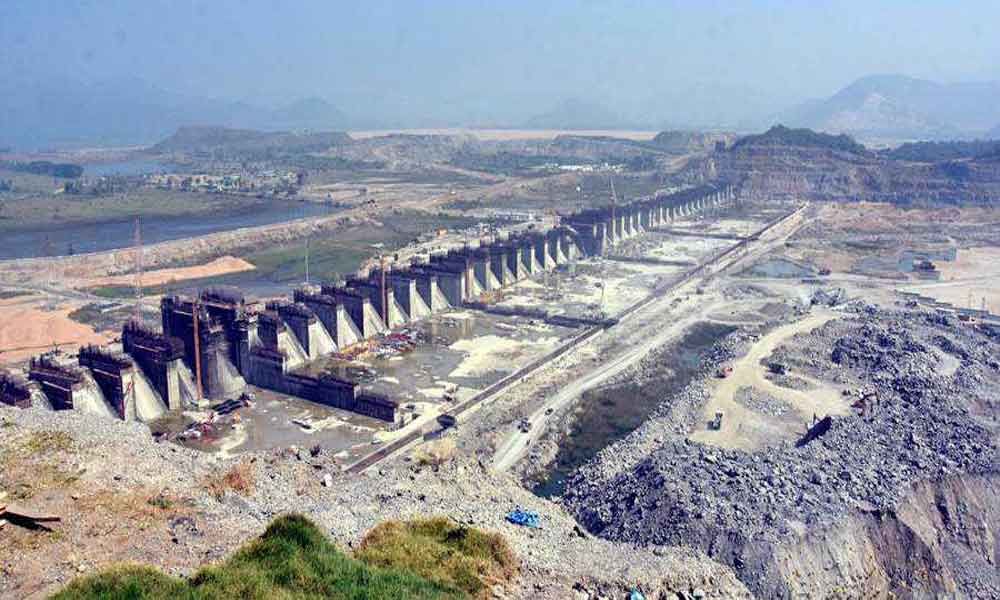 Polavaram Project works gained significant momentum, both in terms of construction works and engineering clearances. Efforts are on full swing to complete this multi-purpose project within the specified timeframe. Intending to focus on the public interests in place of short-sighted political and contractual interests, the state government is showing high priority to complete the project using sophisticated engineering technologies and scientific methods. As all the unscientific gaps and loopholes in project design and its implementation are being addressed, this prestigious national project has gained a new pace with a refined engineering model.

Considering the favourable time to speed up the works, the contracting company Megha Engineering Infrastructure Limited (MEIL) is taking all the steps to use the resources more productively. All-out efforts are being carried out to pool up the expertise and resources to accomplish the project within the stipulated time. The company is determined to demonstrate its mettle again in executing such prestigious projects in a time-bound manner. The State Government is also extending all its support by taking appropriate decisions and providing needed direction for the project implementation. While Spillway works to an extent of 62818 cubic meters have been executed within a short period, preparatory works to speed up the rest of the project works are in full swing. Vibro compaction works to test the strength of the soil, preliminary works linked to Gap-1 constructions, blasting works for construction of Hydro-Electric Power Station, cofferdam works on the upper and lower part of the project site that prevents obstacle due to unforeseen floods are going on with rapid pace.

It is critical to obtain required approvals for scientific designs to execute the project within the deadlines. If such design clearances are not there for the works to be taken at present, there is no utility in speeding up the works. Realising this, MEIL sought speedy clearances for such designs from the government, during the project review undertaken by Chief Minister Mr. YS Jagan Mohan Reddy. It made it clear that such clearance is necessary to complete the project in time. Chief Minister instantly responded and issued orders for appointment of two special officers, to be placed at Delhi and Hyderabad, for getting needed clearances for the project. Ever since project works gained much-needed momentum.

Indeed, the rules and engineering technicalities for the project are very clear from the beginning. But their overlook by the erstwhile government has made the project implementation more complex, resulting in a situation where villages getting submerged even with a small flood in the river. Now works are concentrating on rectifying such gaps and an overlook of technicalities.

Though MEIL got these project work in November itself, it could not initiate the works instantly. Almost three months of valuable time has been lost due to modification of earlier works that were carried out in a non-engineering process by the previous government. The high priority given for the construction of Coffer Dam by Mr Chandrababu Naidu government, with so much of shortsightedness, has resulted in a submergence issue. He tried to complete the construction of Coffer Dam and store some water in it, in a way that can be released through the left and right canals during the flood times; the idea was to make the people believe that the project is partially completed. This is highly in contrast to the engineering principles. At that time, Central Government also fell in line to his pressure and permitted for construction of Coffer Dam with a height of 42.5 meters. Except for Polavaram, nowhere an irrigation project has got such clearance for such type of construction. Coffer Dam is a temporary structure normally taken up for diverting the river water during the process of constructing the main dam. It avoids obstruction of project works by the water during the floods.

The construction of such a big structure has resulted in a heavy stagnation of water during the floods last year, with which roads were washed away. Almost 4 TMCs of water was stagnated, and it has to be pumped out for continuation of works. Pumping machines continuously lifted out water for nearly 3 months, and project works could be re-initiated only by the end of January.

During the regime of Chandrababu Naidu, the project works witnessed very slow progress, even though it has received all the critical clearances when Dr Y.S. Rajashekar Reddy was Chief Minister. The left and right canals were also completed during his rule. But it could not get needed focus and priority by the following Congress and Telugu Desam governments. During the nine years in between 2010-2019, except a small part of Spillway construction along with Diafram wall and Coffer Dam, no significant work was completed. The project got a fresh breath since a new government was formed by YSR Congress Party under the leadership of Y.S Jagan Mohan Reddy.

After taking reins, Chief Minister Jagan Mohan Reddy immediately changed the project construction company with an intention to speed up the works. At the same time, his government focused on taking balance critical clearances which were neglected by the previous government. While this project requires clearances for a total of 45 designs, it took nearly 10 years to get sanction for 37 designs. There were 8 pending clearances critical for the project. Chief Minister Jagan Mohan Reddy took the initiative while reviewing the project and issued needed policy instructions to speed up the pace. These instructions paved the way for Project Authority under the Central Water Commission to inspect the ground level works.

By giving such freedom to engineering experts, the government made it clear that is taking decisions without any political and contractual interest in this matter. The government also increased pressure on the Committee headed by CWC Chairman Mr A.D. Pandya to speed up the clearance process of project designs. It paved the way for taking decisions of evolving designs for construction of Rockfill Guide Wall on the left bank of Approach Channel and a strong construction toward the left bank to prevent the floodwater intensity. As the flood water released from the Spillway will fall on the right bank, it is proposed to evolve a strong design for that purpose. Government has constituted Expert Committees for evolving such new designs. Project officials have already submitted a design proposal to the Central Water Commission that is intended for works related to diverting the floodwater from Spill Channel to Pilot Channel and finally into the Godavari river. The state government is now putting all its efforts to get clearance for this design as early as possible. The earthen and stone works related to Gap-1 of Main Dam are yet to get clearances. Though these are critical works, they are highly neglected by the previous government. Suitable proposals have also been prepared about the nature of construction in Gap-2. All these initiatives are giving new hope over the timely completion of the Polavaram Project.