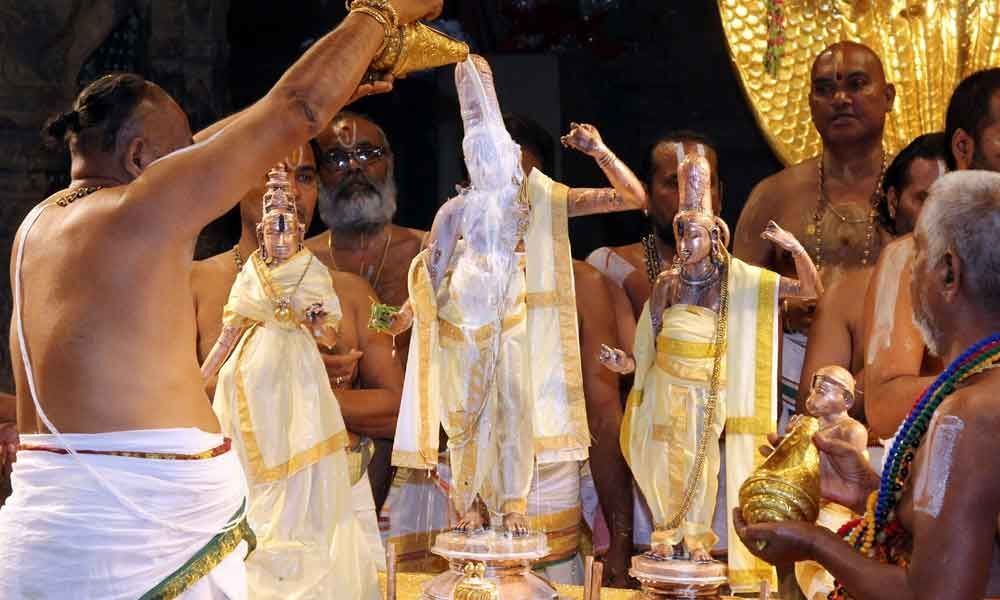 x
As part of Sriramanavami celebrations, priests performing Snapana Thirumanjanam to the processional deities at Srivari temple in Tirumala on Sunday
Highlights

Tirumala: The TTD organised grand celebrations of Sri Rama Navami Asthanam at the Srivari temple here on Sunday. The rituals began with Snapana Thirumanjanam for the utsava idols of Sri Sitarama, Lakshmana, Hanumanta at the Ranganayakula mandapam in the shrine.

The holy premises of the Srivari temple resounded to the chanting of Thaitriya Upanishad, Purushasuktam, Sree Sutkam, Bhu suktam, Nila sutkam, pabchashanti mantras and Divya prabandham parashus rendered by the Vedic pundits to mark the special occasion of Srirama Navami.

Sri Pedda Jeeyar swami, Tirumala JEO KS Sreenivasa Raju and temple DyEO Harindranath and others participated. In the evening, Lord Rama rode on Hanumanth vahanam on the mada streets. Later in the night the colourful event of Sri Rama Navami Asthanam was conducted at the Bangaru vakili in the Srivari temple.