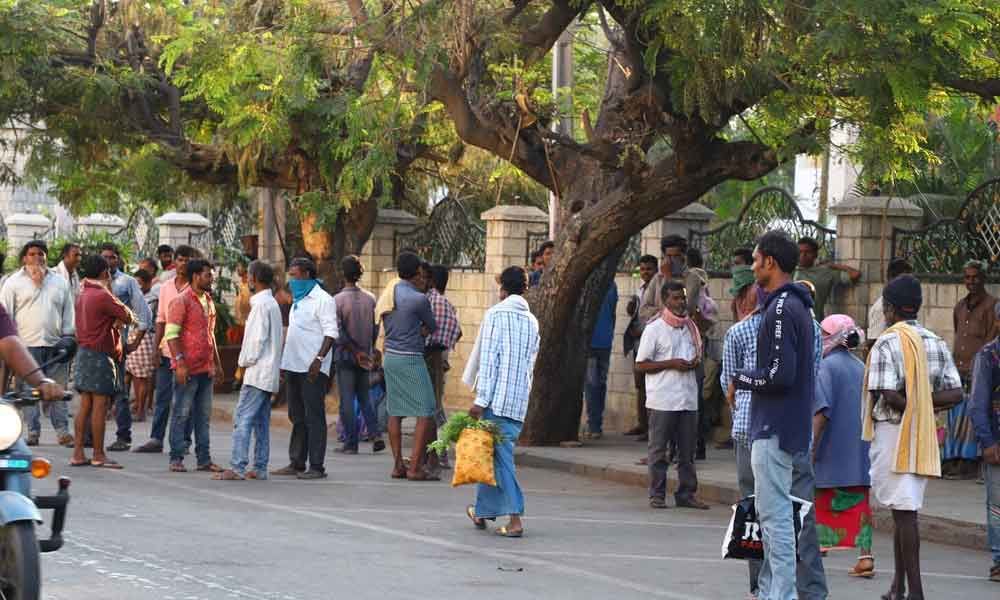 Nearly 30,000 daily workers lose their livelihood due to lockdown They are waiting for help from government for their living

Tirupati: Several thousands of migrated labourers have been facing hardships for their survival in Temple city due to lockdown imposed for prevention of corona virus spread. It is learnt that about 30,000 migrated labourers from North Indian states like Rajasthan, Jarkhand, Uttar Pradesh, Bihar and Assam have been working as daily wagers in Tirupati and surroundings. Similarly, hundreds of workers from neighbourhood districts like Kurnool and Anantapur are also living in the city.

They have been working as carpenters, painters, in building construction, granite laying and other occupations. Many contractors and sub-contractors had brought them here. They were staying in three or four members in small rooms on the outskirts of the city. They lost their daily wages for the past five days due to lockdown.

In normal days each labour will get Rs 500, Mestri will get Rs 750 as daily wage. Now they are not getting any financial aid from state government or from the contractor. They don't have any ration cards here for getting free rice and cash aid from government.

A migrated labour S Kannaiah of Begusarai of Bihar state said to The Hans India, ``I was working for the last two years in Tirupati as daily wage labourer in granite laying work, my owner pays wages weekly once after completion of work. This week, I lost the income as there was no work. There are four members in my family and we have no money to purchase essential commodities.''

Another migrated worker from Manthralayam of Kurnool District G Pavan Kumar said, "I was working as daily labour in building construction field. I have wife and two children, we are waiting for government aid in the form of rice and groceries during the lockdown days. "