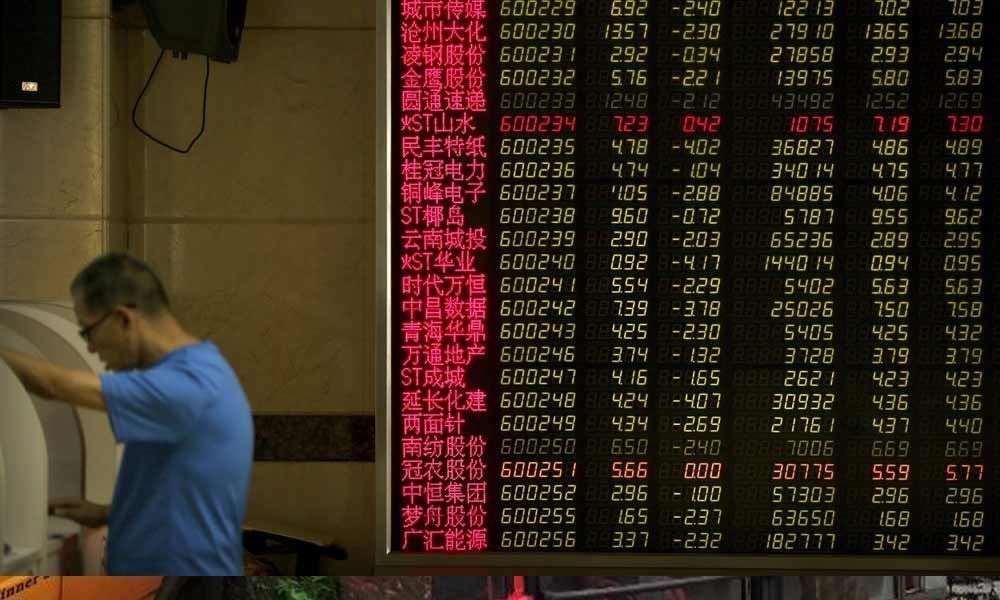 Trump's announcement of 10% tariffs on $300 billion of Chinese goods, due to take effect Sept. 1, surprised investors after the White House said Beijing promised to buy more farm goods. That came as their latest round of trade talks ended in Shanghai.

That came after Federal Reserve Chairman Jerome Powell disappointed traders Wednesday by suggesting the U.S. central bank had no plans for an extended cycle of interest rate cuts.

"Markets are reeling after President Trump expressed his frustration with China's stalling techniques," said Stephen Innes of VM Markets in a report. "With the global markets on edge after Chair Powell's communication failed so miserably, few traders have been willing to step in front of this steamroller."

Also Friday, China's yuan fell to its lowest level this year against the dollar after Trump's tariff threat fueled economic growth jitters. The yuan came close to breaking the politically sensitive level of seven to the dollar.

The yuan tumbled to 6.9520 to the dollar, its weakest since December, but recovered slightly by midday.

Trump's threat "will likely put more depreciation pressure" on the currency, said Tao Wang of UBS in a report. She said Beijing is likely to "tightly manage" the exchange rate "to avoid any significant depreciation."

In a series of tweets, Trump noted that while slow-moving negotiations have been "constructive," China has not followed through on some prior agreements.

Washington has imposed tariffs of 25% on $250 billion worth of Chinese goods over complaints Beijing steals or pressures companies to hand over technology. Beijing retaliated with tariffs on $110 billion of American goods, including agricultural products, in a direct shot at Trump supporters in the U.S. farm belt.

Unlike earlier tariffs, which were meant to minimize the impact on ordinary Americans by targeting industrial goods, the new ones would affect a wide range of consumer products.

The Fed cut its key interest rate for the first time in a decade Wednesday, citing uncertainty over the U.S. trade conflicts.

Qualcomm fell 2.7% after the chipmaker gave investors a surprisingly weak profit and revenue forecast because of problems in China. A ban on exports to Chinese tech giant Huawei hangs over the company.

JAPAN-KOREA TENSION: Japan's Cabinet agreed to remove South Korea from a list of countries with preferential trade status, stepping up pressure in a dispute over export controls and compensation for wartime Korean laborers. The decision increases controls on exports of dozens of products with possible military uses. It follows a requirement for approval of sales to South Korea of materials used in semiconductors, smartphones and other high-tech devices. South Korea's government expressed "deep regret" and said it will respond.