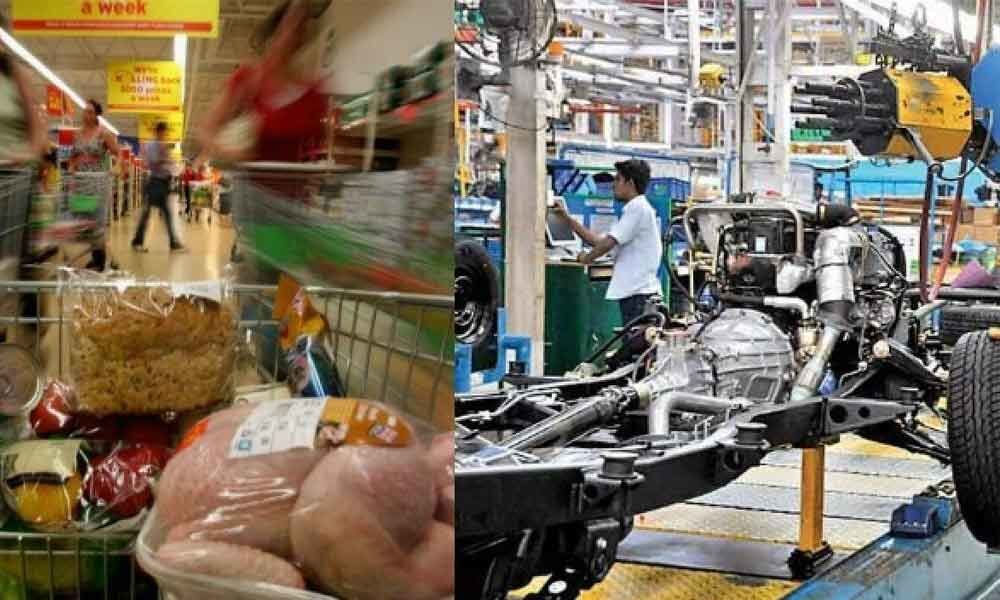 New Delhi: Rising for sixth month in a row, retail inflation rose to 3.18 per cent in June due to costlier food products such as grains, pulses and protein-rich items meat and fish, government data showed on Friday.

India's industrial output growth slipped to 3.1 per cent in May mainly on account of subdued performance of mining and manufacturing sector.

Retail inflation has been showing a rising trend since January this year when it stood at 1.97 per cent.

The overall food inflation based on consumer food price index rose to 2.17 per cent in June as against 1.83 per cent in the previous month, the Central Statistics Office (CSO) data released by the Ministry of Statistics and Programme Implementation showed.

The inflation for protein-rich 'meat and fish' category quickened to 9.01 per cent during the month (against 8.12 per cent month earlier). For the 'pulses and products' category, the rate of price rise was sharply higher at 5.68 per cent against 2.13 per cent, while the inflation in the 'cereals and products' basket rose to 1.31 per cent from 1.21 per cent in May this year.

However, prices of fruits continued to show deflationary trend with inflation standing at (-) 4.18 per cent, while inflation in vegetables eased to 4.66 per cent. For the 'fuel and light' category, retail inflation in June slowed a tad at 2.32 per cent.

"In line with our expectation, CPI inflation remained largely benign despite the delay in the monsoon and kharif sowing. "While vegetable prices are likely to firm up in the ongoing month on the basis of seasonal factors as well as higher transport costs, the pick-up in the monsoon rainfall in the last week is likely to boost sowing in the near term, which would help keep food inflation in check," said Aditi Nayar, principal economist, ICRA.

As per Central Statistics Office (CSO) data, the capital goods output, which is a barometer of investment, grew at 0.8 per cent compared to 6.4 per cent in May last year.

As per use-based classification, the growth rates in May 2019 over the same month last year are 2.5 per cent in primary goods, 0.6 per cent in intermediate goods and 5.5 per cent in infrastructure/ construction goods.