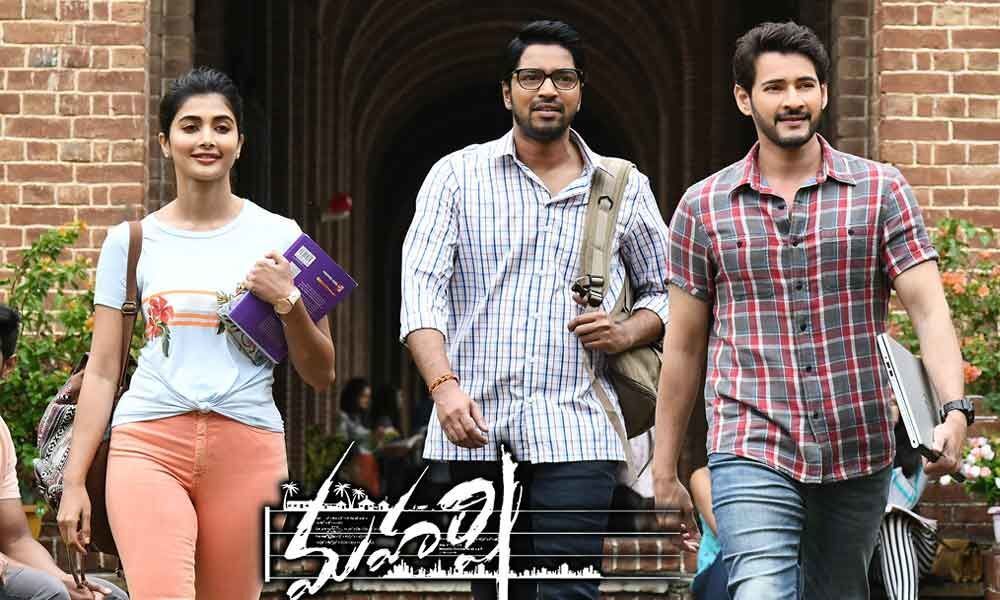 Super Star Mahesh Babu, Pooja Hegde, Allari Naresh, and others played critical roles in the film Maharshi. Directed by Vamsi Paidipally, the film is jointly produced by Dil Raju, Ashwini Dutt, and PVP. The movie's trailer hiked the expectations on it to a new level. The film released today amidst huge buzz. Check out the film's review here.

Rishi Kumar (Mahesh Babu) is a guy with bigger dreams. He successfully cracks a job at an MNC and becomes the CEO of the same company. Later, he realises that his friend Ravi (Allari Naresh) needs his help. Ravi changes Rishi's thinking. What did Rishi do then? How did he reach his goals? What happens in the end? Forms the story of the movie.

Mahesh Babu is definitely the show stealer of the film. His energetic performance is undoubtedly one of the major plus points of the movie. Whether it is a college student or a CEO or a farmer, Mahesh Babu has gone under the skin of the character and has delivered his career-best performance in this movie. Pooja Hegde looked absolutely stunning in this film, and her chemistry with Mahesh Babu is an eye feast to watch. Allari Naresh breathes life into his character. He has delivered a memorable performance in this movie and will leave an impact on the audience. Jayasudha and Prakash Raj acted as husband and wife again in this film and needless to mention that they have acted naturally. Rao Ramesh delivered an honest performance. Ananya did an excellent job in essaying her role. Vennela Kishore and Mukesh Rishi performed well. Meenakshi Dixit is a perfect pick for her character. The rest of the actors including Hemanth, Jhansi, Sameer, etc. made their presence felt.

Production values by Dil Raju, Ashwini Dutt, and PVP are luxurious. As all the three are star producers, we can say that they have not compromised at all in terms of quality and delivered the best output. Music by Devi Sri Prasad is just average. A couple of songs are good, and his BGM is worth appreciating. Cinematography by K U Mohanan is beautiful. He has produced some sleek visuals for the film. Editing by Praveen KL is clean and neat.

The solid story can be considered as one of the major driving factors behind the film. Vamsi Paidipally has prepared a new script for the film. He has not only took a beautiful story but also laced with equal amounts of comedy, romance, emotions, and some sentiments as well. Notably, some of the emotional scenes are handled exceptionally well, and we can give the entire credit to Vamsi Paidipally for his exciting narration. The movie starts on a lighter note. The first half is filled with some comedy scenes. The college sequences came out well and are extremely fun to watch. The friendship between Mahesh, Naresh, and Pooja is showcased beautifully. The interval twist is refreshing. The second half becomes more serious, and the emotional scenes are heartwarming. Mahesh Babu's effortless performance made his role extremely relatable. The press meet scene is the highlight in this movie, and Mahesh Babu's outstanding performance is an eye feast to watch for the audience. The climax, especially, the scenes about farmers are the heart of the movie. To conclude, 'Maharshi' can be considered as a memorable milestone movie in Mahesh Babu's career.