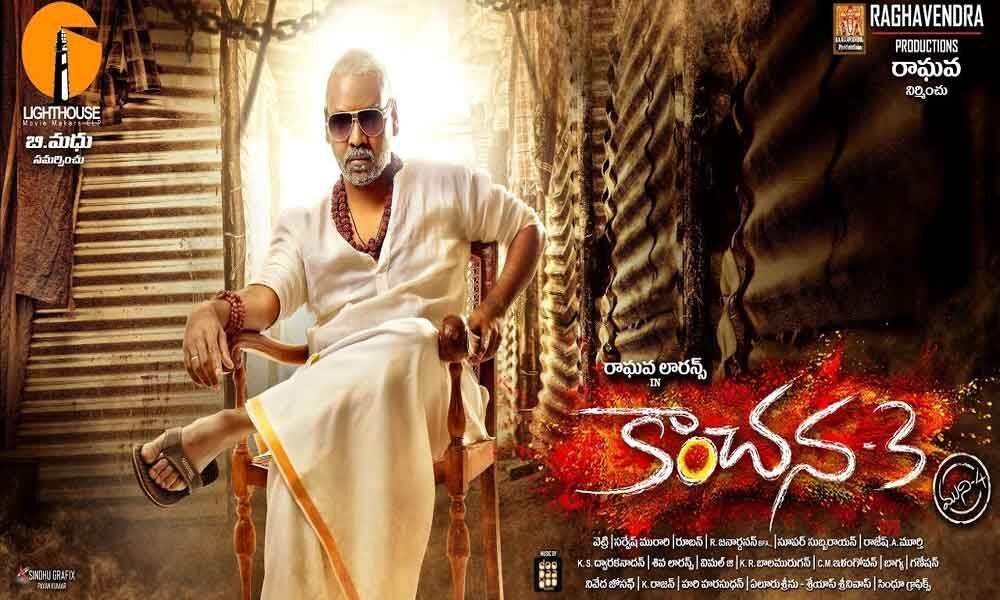 'Muni' series will come into our mind when thinking about horror comedies. Now touted to be the fourth installment of 'Muni' series, titled as 'Kanchana 3', the movie is slated to hit the screens very soon. Raghava Lawrence not only helmed this project but also played the lead role in it. The teaser and trailer of the film have hinted that unlike the prequels, the movie is going going to have something incredibly different and exciting which increased the curiosity on the film. Oviya, Nikki Tamboli, Vedhika, etc. have played crucial roles in the movie. Ending the long wait, the movie got released today on April 19th, 2019. Here is the review of the film.

Raghava (Lawrence) goes to his grandfather's house with the family for a family reunion. After getting there, he is haunted by Kasi (Lawrence) who is seeking revenge against a politician Shankar. Who is Kasi? What is his story? How did he come across Raghava? Forms the story of the movie.

Raghava Lawrence is undoubtedly one of the finest actors in the industry and the actor has proved the same with his mesmerizing performance in the movie. More than Raghava Lawrence, his character will speak more. Oviya hasn't tried this kind of character in her previous films but she has acted very well. Vedhika performed naturally on the screen. Nikki Tamboli, Kovai Sarala and Nedumudi Venu delivered decent performances. Devadarshini marked her screen presence felt. The rest of the cast also performed well.

Raghava Lawrence has prepared an interesting script for the film when compared to the prequels. 'Kanchana 3' has a simple story and Raghava Lawrence has handled it really well. The director has managed to engage the audience. Production values by Sun Pictures and Raghava Productions banners are rich and lavish. We can say that the producers have invested good amounts and output is also satisfactory. Music by Doopaadoo is good. Especially in the horror scenes, the background score is brilliant. Cinematography by Vetri Sushil Choudhary added more strength as camera angles and visuals are both worth appreciating. Editing by Ruben is clean. Runtime is crisp.

'Kanchana 3' has a decent story. The movie starts off on an interesting note. The first half is filled with comedy, romance and slight horror. The first half will also have some spooky scenes which will also be funny at the same time. Some of the scenes felt like they are copied from the previous versions. It is evident that Raghava Lawrence has took the elements that became hit in the previous versions and repeated them in this movie as well. Some of the scenes are funny and hilarious. The interval scene is quite impressive. The second half is filled with emotions. The flashback is narrated well. As usual, the climax is good. The mass scenes will attract the attention of the action lovers. Overall, the movie is a one time watch.

Also Read:Check Out the Trailer of Kanchana 3