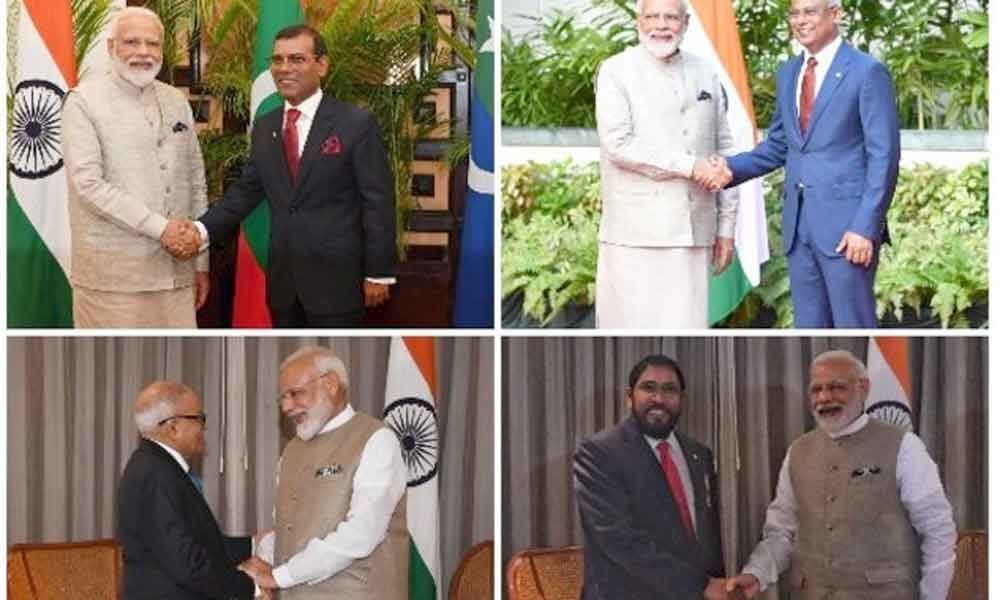 Prime Minister Narendra Modi's first foreign tour of his second term has been carefully thought over in view of the growing hostility of China vis a vis the Indian ocean.

Prime Minister Narendra Modi's first foreign tour of his second term has been carefully thought over in view of the growing hostility of China vis a vis the Indian ocean.

Both Maldives and the Democratic Socialist Republic of Sri Lanka are key to the regional equations and India has very good relations with both the countries. The Prime Minister visited both the countries at the invitation of President Ibrahim Mohamed Solih and President Maithripala Sirisena, respectively.

His visit to Maldives is reflective of the importance India attaches to its relationship as maritime neighbours and long-standing friends. India regards Maldives as a valued partner with whom it shares deep bonds of history and culture. Indian bilateral relations with Maldives have been greatly strengthened in the recent past.

One could certainly say confidently that Narendra Modi's visit will further deepen the multifaceted partnership. It is also a message to China indirectly that India will not keep quiet if Chinese leadership continues to meddle with its own neighbourhood.

China has not only been trying to woo the Indian neighbourhood away from it, but also trying to economically coerce them into its control so that it gains a greater control over the Indian Ocean through their land to thwart India's supremacy.

Coming to Sri Lanka, Modi's visit is to express our solidarity with the government and the people of Sri Lanka in the wake of the terrible terrorist attacks there last Easter on 21 April 2019.

India stands with Sri Lanka in the fight against terrorism as usual and continues to cooperate with it at every turn of the events. Our bilateral relations with Sri Lanka have gained considerable momentum in the last few years.

The Prime Minister had the pleasure of meeting President Sirisena during his recent visit to India to attend the swearing-in ceremony of the new government. The Prime Minister has stated that his visit to Maldives and Sri Lanka will further strengthen our close and cordial ties with our maritime neighbours, in line with the country's 'Neighbourhood-First Policy' and the vision of Security and Growth for All.

This in a way is an extension of his domestic policy of 'Sab ka Saath, Sab ka Vikaas' to the immediate neighbourhood. The only country that does not understand the importance of 'Vikaas' is, of course, Pakistan with its dubious terror state distinction. One cannot blame India for not responding to the offer of talks by Pakistan which wants to drag Kashmir into an international arena by accusing India of abusing human rights.

The Neighbourhood-First Policy cannot be applied to countries like Pakistan. And hence, no regrets if India does not want to negotiate peace with Pakistan. Peace is not a trait of terrorists and its perpetrators who routinely kill their own countrymen as well as outsiders.